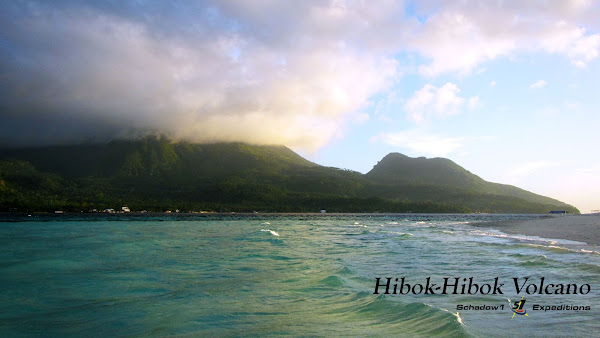 Camiguin is known as the island born of fire as it is an island formed due to volcanic eruptions of its 7 volcanoes. The latest activity of which is from Mt. Hibok-Hibok that erupted 1951 that shaped one of its local attraction, the Sunken Cemetery. Schadow1 Expeditions climbed this volcano to map the Yumbing trail and extend it for a traverse trail to Ardent Hotsprings. A total of 14.7-kilometer traverse hike. The following is the account of climbing this 1337 MASL volcano... the H2 Traverse.


Mt. Hibok-Hibok is a major climb due to its prominence. The hike will start at 80 MASL and end up at its main viewpoint at 1300 MASL. The trail features multiple ascents and descent varying from mild (30 degrees inclination) with an average of 60-75 degrees and a continuous 80-90 degrees descent and ascent as you leave the crater towards the main viewpoint.

The famous trail to its summit is the Ardent trail where you start at 200 MASL by Hibok-Hibok's foot where the Ardent Hot spring is located. It is shorter, about 5 kilometers, however, the ascent is challenging as you start at flat grounds for the first kilometer of the trail then you will start to pound on 70-85 degrees inclination the rest of the climb. A never-ending assault. The path ends on its highest viewpoint at 1300 MASL. The crater could not be seen from this trail.

A registration fee to DENR of P200/pax is required as you pass via the Ardent trail.

The other trail is the Yumbing trail and we were here to map this trail for the future use of mountaineers.

The Yumbing trail is long with over 9 kilometers of the track all the way to the main viewpoint at 1300 MASL, yet this trail gives the more "relaxing" trek as you will be passing through lush foliage which is not available at the Ardent trail. The inclination is generous: running from 30-60 degrees all the way up to its crater. It will, however, be arduous as soon as you leave the crater for a traverse on the way to the main viewpoint then down to the Ardent trail. The way out of the crater is mostly 80-90 degrees and is a rocky trail. Beware of loose rocks so ensure the stability of what you are stepping on before you pursue your next step.

Be aware that there is no water source on either Yumbing or Ardent Trail.

There is no registration fee if you use Yumbing as the jump-off as this trail is a backdoor for Hibok-Hibok however it is best that you get a DENR-certified guide if you use this trail in case of emergencies.

We hired the services of Bibot, a local of Yumbing town in Camiguin. He is a DENR registered guide. The initial offer for his guide fee is P1200 however we negotiated for a lower price for our expedition to which he agreed. He is an expert and very generous and highly recommends his performance in guiding us all the way.

For an H2 traverse, it is recommended to start via Yumbing trail early in the morning as the sun is still on the other side of the volcano and then traverse to Ardent when the sun is already at the opposite side on the afternoon.

At 6:00 AM, we head on the jump-off at Yumbing town. the jump off happened to be near to the hotel where we stayed and is only about 5-10 minutes motorcycle ride. You can park your vehicle among the properties of residents in the area. Usually for free but I suggest that you at least donate Php 20.


The trail starts on a copra farm and after a kilometer, it will all be forested of which its density is similar to Mt. Cristobal in Quezon. You will be passing through the edge of Mt. Carling (600 MASL) before you reach the foot of Hibok-Hibok.

The trail is full of large mosquitoes and I was told by our guide that they do not carry malaria nor dengue so its nothing to be worried about. The issue is if you can withstand their bite so ensure that you are fully covered when hiking this trail. They will leave you as soon as you go over 750 MASL.


A familiar sighting of Teka-Teka plant (the treacherous thorn plant thriving at Malarayat mountain range in Batangas) is surprisingly evident at Hibok-Hibok's Yumbing trail after 500 MASL. But most of them are still small and is only available until 900MASL.

As the Yumbing trail is densely forested, the only view available is at 878 MASL where you will get a glimpse of the white island. Not to worry as you would have a better view as you get over its crater.

At over 900 MASL, it will become colder and the forest will be dominated by big trees, orchids, and moss. 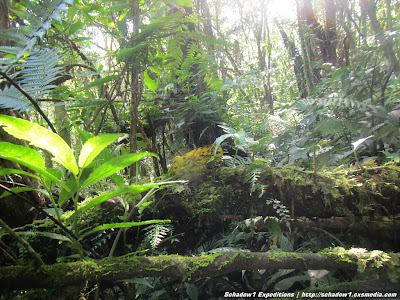 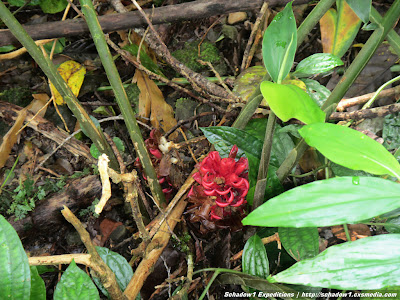 At 11:00 AM, we have reached Hibok-Hibok's large crater and in here is the only available campsite for Hibok-Hibok. It can only accommodate a maximum of 5 tents as it is small.

Use caution when walking along inside the crater and limit yourselves in going near the crater lake as the ground is very soft. I was told that there is a quicksand somewhere around the area. Quicksand is viably possible due to the hollow nature of an active volcano's crater.

We took our lunch inside this crater then we headed on for a challenging climb up the crater towards the other side of Hibok-Hibok. The climb to get out of this crater is dominated by large boulders and rocky trails. Beware of loose rocks and make sure that what you are stepping on is stable. the climb varies from 80-90 degrees inclination and you need to hold to roots of trees or climb the trees themselves to go up.


We have reached the crater viewpoint after an hour from leaving the crater itself. This viewpoint is at 1272 MASL.


After the crater viewpoint, the climb continues with various ascent and descent on rocky trails. The area after which is already hot and humid as the forest turns to grass. The next viewpoint will be the main viewpoint of Hibok-Hibok at 1300 MASL and is where the Yumbing Trail meets Ardent trail.


We reached the main viewpoint of Hibok-Hibok at 1:40PM and was greeted with the beautiful scene of Camiguin at 1300 meters above it! 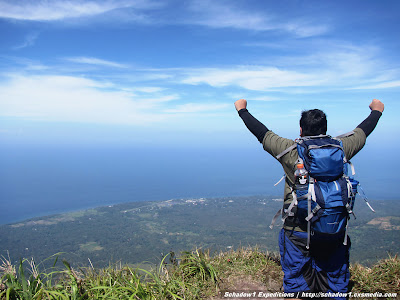 The Hibok-Hibok highest point which happens to be the cliff at the back is not safe for climbing due to a landslide last 1992 that made it impossible to climb according to our guide.

We started our descent at 2:13PM via the Ardent trail and is very taxing on our knees due to 80-degree slippery slopes.

As Hibok-Hibok is still an active volcano, PHIVOLCS volcanic activity remote monitoring site is seen along the Ardent Trail. It sends data via its communications antenna to the Hibok-Hibok observatory which is about 3.41 kilometers away at 55 degrees bearing.

After a long climb, we reached Ardent Hot springs at night time, 8:16PM and had a rewarding and relaxing dip with its 36 degrees centigrade water from the volcano.

It was a successful mapping mission of the H2 Traverse by Schadow1 Expeditions. The data is free for use for mountaineers everywhere so you can enjoy this beautiful volcano on the island of Camiguin.

How to get to Hibok-Hibok from Manila 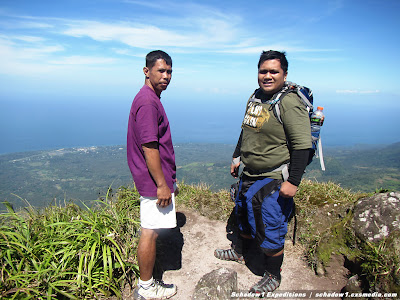 Bibot (DENR-registered guide), +63 906 1192537
Expert and very generous. I had a knee accident as we descend from the Ardent trail and even his son went up to help out. Schadow1 Expeditions highly recommends his service.


The data gathered in this Mt. Hibok-Hibok climb has been contributed to the +OpenStreetMap Philippines project for free use of mountaineers who plan to climb this mountain with GPS assistance. 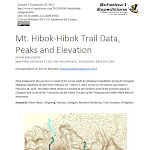 Data produced in this journal is a result of the survey made by Schadow1 Expeditions during its Camiguin Mapping Expedition of 2013 from February 26 – March 3, 2013. Survey of the volcano was made on February 28, 2013. The Hibok-Hibok Volcano is located at the northern area of the province-island of Camiguin and is one of the 7 volcanoes on the island. It is part of the Timpoong and Hibok-Hibok Natural Monument.
DOI: 10.13140/RG.2.2.18209.45926
Pages: 180
Publication: 03-2013
Download

For a more detailed account of Schadow1 Expeditions on its 4- day Camiguin Adventure and Mapping Expedition, check on the links below: