Maps at work - Typhoon Haiyan and the Worldwide Mapping Effort

Because of the strongest typhoon in history that hit the Philippines, Haiyan, locally known as Yolanda has brought about a worldwide collective effort in assisting the battered areas of the country. A worldwide crowd-sourced initiative has been activated to map the extremely devastated areas of the country due to the storm; to which relief efforts and rescue missions have been dependent immensely while at ground zero. It all started as a single call which escalated to a series of exponential response of mapping advocates around the globe to create a highly detailed and accurate map of the storm-stricken areas in the Philippines. A map to which many of the rescue and relief operatives have been using to mobilize their mission and strike right at the heart to where the community needs it.

At the night of November 7, 2013 at 11:05PM local time, less than 24 hours before Haiyan has made its first landfall at Guiuan, Samar, Andrew Buck has called upon mapping advocates regarding a possible activation of the Humanitarian Openstreetmap Team (worldwide humanitarian crowdsourced mapping effort) to focus on the mapping efforts for the Philippines. 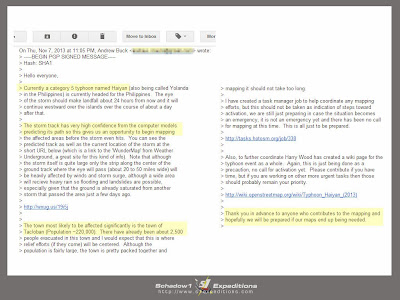 .. The town most likely to be affected significantly is the town of Tacloban (Population ~220,000).  There have already been about 2,500 people evacuated in this town and I would expect that this is where relief efforts (if they come) will be centered... we are still just preparing in case the situation becomes an emergency, it is not an emergency yet and there has been no call for mapping at this time.  This is all just to be prepared.


Assisted by Maning Sambale, Vice President of Openstreetmap Philippines and Pierre Béland, a member of the board for the Humanitarian Openstreetmap Team, they have coordinated on the official humanitarian activation of focusing on the storm-stricken areas. This is together with the Red Cross and Digital Humanitarian Network.

In a few hours, mapping advocates around the globe has heed the call, making the worldwide coordination with record-breaking map updates of the Philippines hitting 2.5 million updates by 1,113 mapping advocates in just a week after the call. As Maning Sambale recounts, after 7.5 years of mapping advocacy on Openstreetmap, he was only able to reach 1.8 million changes. For this worldwide effort, it only took less than seven days.

The data about the mapping contributors' efforts can be seen at Pascal Neis' website and is updated in a hourly-basis. https://resultmaps.neis-one.org/osm-typhoon-haiyan-2013-contributors

The mapping community has been targeting areas in Leyte, Samar, Northern Cebu, Northern Panay Island, and the Calamianes to map the areas in detail including the structures so that the disaster mitigation teams would have a detailed assessment of the area to where the information they may obtain can be used for precise mobilization of relief and rebuilding efforts.

The Eyes in Space

The humanitarian activation has even called various satellite imagery and geospatial content operators to re-orbit their satellites and focus on the disaster-stricken areas. This is to provide their service for free in assisting the mapping advocates in the assessment of the structures after Haiyan has hit the country hard.
(1) The Copernicus Emergency Management Service with collaboration of the European Space Agency , (2) Landsat 8 (NASA),  (3) DigitalGlobe, and (4) Astrium via the Pleiades 1 satellite has opened their lens while in orbit and provide imagery to the mapping community. 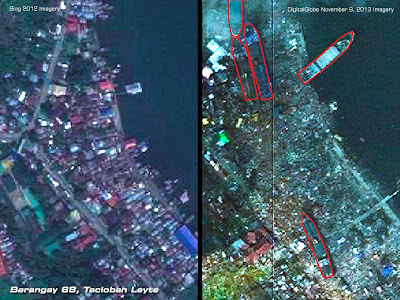 The image above is a comparison of pre and post disaster satellite imagery of Barangay 68, Tacloban Leyte. The post-imagery shows large container vessels placed inland to residential areas by the storm surge brought about by Typhoon Haiyan. The latest satellite imagery is what the mapping advocates use to create a detailed map of the crisis areas.

With multiple, synchronized, and collaborated efforts, a detailed map of the storm-hit areas has been brought about and is currently assisting various governments and volunteer groups on their relief, rescue and retrieval operations.

Recently, the online basemap of the Humanitarian Openstreetmap team has accommodated the data that mapping advocates have been contributing over the week. The basemap now includes information of partially and completely damaged structures and passable roads to which mapping advocates have mapped and distinguished using the latest post-disaster satellite imagery donated by the satellite companies. 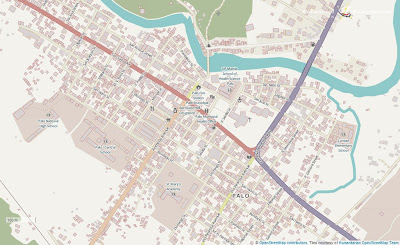 Off-line GPS-Routable Map of the Philippines

On the ground, field rescuers and relief volunteers are supplied with daily update of GPS routable maps compiled by Schadow1 Expeditions since November 10 and is downloadable for free in this blog. The mapping data has been compiled from Openstreetmap data to which more than a thousand mapping advocates have been contributing over the last week since Haiyan made its landfall.

In Manila, #OplanHatid, a volunteerism project of various individuals who have vehicles with installed GPS-assisted navigation device are suggested to download the same map to help bring the evacuees from the typhoon-stricken areas to their relatives. They are arriving every two hours from C130 planes of the Philippine Airforce at Villamor Airbase in Pasay City.

International media has recognized the collaborative efforts of mappers worldwide in the Philippines and the GPS map that workers in the field Schadow1 Expeditions compiles including The Guardian , 360 Magazine of the Netherlands and Al Jazeera. 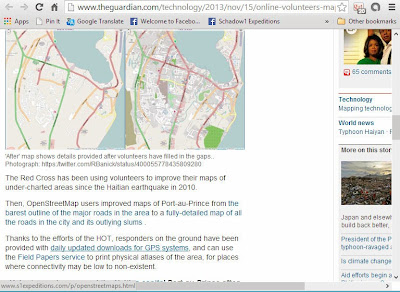