Panampangan Island, the Beach and the Longest Sandbar in the Philippines 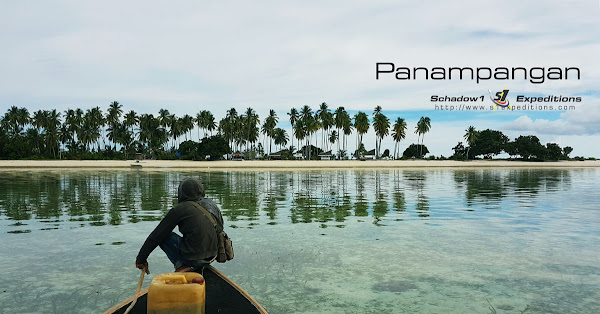 Fine white sand on what seemed to be the longest sandbar with an island dotted with a countless number of coconut trees. This is how to describe what Panampangan Island is. Panampangan is one of two islands that is situated on a reef where it is part of. Panampangan is located just at the border between the municipalities of Panglima Sugala and Sapa-Sapa of the province of Tawi-Tawi. It is a 12-hectare island in the middle of the shallow waters of the northernmost extremities of Celebes Sea.

Panampangan island (coordinates N5° 03.669' E120° 04.320') is about 13 nautical miles away from its nearest jump-off, which is at Barangay Batu-Batu in the municipality of Panglima Sugala (formerly known as Balimbing). We reached the island via a 2-hour ride in a round-boat from Batu-Batu; while in turn, this barangay is about 30 minutes away from the capital town of Bongao by land. Batu-Batu was the former capital of the province until it was transferred to Bongao in 1979.

Although the island is the main island getaway in Tawi-Tawi, it still remains to be less visited by tourists probably due to the fact that Tawi-Tawi is misconstrued to have security issues due to the presence of terrorists in the past. However, the truth is, Tawi-Tawi is now safe due to the surrender of high-ranking officials of the terror group in April 2017. And Panampangan, being one of the nearest islands to the main island of Sanga-Sanga and Bongao, means it is heavily guarded by the Navy and Marines. The island, to date, already has basic amenities such as the availability of picnic huts; although you should still bring potable water as the island does not have an adequate water source. Electricity is provided via a diesel generator provided by the Marines, sufficient enough to supply lighting until 11 in the evening. The island is also guarded by a Marine detachment and about five Badjau families live on the island.


During low tide, the sandbar extends far out to about 3 kilometers next to its neighboring islet, Basibuli; also in the same reef. This is so far the longest sandbar I have been to in the Philippines. Beach bumming on the island is not a problem as it remains to be shaded by coconut trees that are abundant on it.

The underwater scene around this island remains to be captivating as the shallow waters extend to about 300 meters off-shore and are full of marine life including turtles, seagrass, corals and sea urchins.

We had a very satisfying meal all throughout our stay. A feast of seafood that we also got from the sea with the help of the locals. We had tuna, scallops and sea urchin, which the Marines assisted us to cook.

Schadow1 Expeditions reached the island during our mapping expedition of the province of Tawi-Tawi together with the Philippine Marine Corps. This is during our mapping, reconnaissance, extraction-deployment mission in a time of Martial Law due to the occupation of extremists in the city of Marawi in the province of Lanao del Sur. We stayed in Panampangan overnight and had a great bonding with the locals and the Marines who have been with us all throughout the expedition together with our new found friends who have been a part of this expedition. I literally slept on the fine sand until 1AM, thinking it was soft as my bed back at home until I realized I have to move into the picnic hut and wrap up under my camping sheet. Surprisingly, there is no problem with mosquitoes. 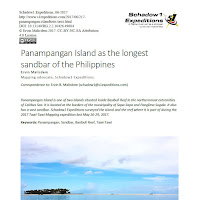 Abstract
Panampangan Island is one of two islands situated inside Basibuli Reef in the northernmost extremities of Celebes Sea. It is located at the borders of the municipality of Sapa-Sapa and Panglima Sugala. It also has a vast sandbar. Schadow1 Expeditions surveyed the island and the reef where it is part of during the 2017 Tawi-Tawi Mapping expedition last May 26-29, 2017.
DOI: 10.13140/RG.2.2.10426.49604
Pages: 4
Publication: 06-2017
Download