10 Longest Sandbars of the Philippines 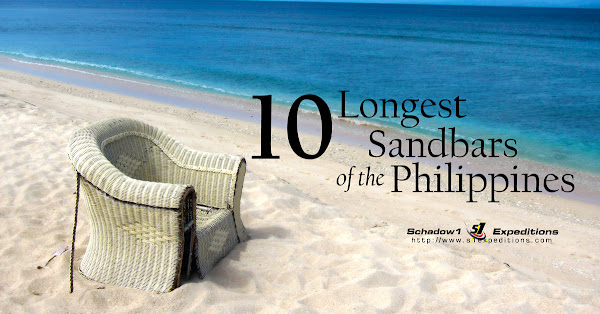 Sandbars are one of the sought-after and picturesque tourist sites in the Philippines. Normally characterized with a fine white sand emerging mid-sea or extending out of an island that reveals itself during low tide. Sometimes they are also called shoals, but a sandbar is specifically made up of sand. The best thing about the Philippines, being an archipelago composed over 7,400 islands, is that there are thousands of sandbars and pristine beaches. And these are 10 of the longest sandbars in the Philippines.

As white sand combines with the shallow bluish waters of the sea, it emanates itself to a calm turquoise-colored water. Sandbars are perfect for beach bumming and its soft-grainy and warm temperature as it is exposed to the sun proves itself therapeutic for stressful feet; while the colors of the surrounding sea calm the senses. This makes sandbars the best destination for relaxing.

Over a kilometer away from the shores of Mambajao, Camiguin is the 10th longest sandbar of the Philippines with a length of 334.2 meters. The frequently changing current, depending on the temperature of the sea, have provided "White Island" with frequently changing shape. From a crab-claw shape to a straight line of sand. (coordinates N9.2575° E124.6562°)

About 8 nautical miles away from the shore of Palompon, Leyte is a 6-hectare island called Kalanggaman. It is midway between Bantayan, Cebu and the island of Leyte and is characterized with a 365-meter long sandbar connected to its pine-tree dotted island. Kalanggaman is the 9th longest sandbar of the Philippines. (coordinates 11.11N, 124.25E)

A 410.51-meter long sandbar connects Snake Island to the northern part of the main island of Palawan. The sandbar is located between the two towns of Taytay and El Nido Palawan. It is the 8th longest sandbar of the Philippines. (coordinates  N11.0945° E119.3408°)

3 kilometers from Alona Beach of Panglao, Bohol is a crescent shape island. Virgin island is 1.3-hectare island filled with Banaba and pine trees with a flagella-like sandbar protruding from its eastern side. During low tide, the sandbar emerges to about 450.55 meters. Pungtod is the 7th longest sandbar of the Philippines. (coordinates N9.5574° E123.7226°)

At the eastern side of the Caramoan's largest island of Lahuy is the 505.23 meters long sandbar called Manlawi. Caramoan is the northernmost peninsula-archipelago of the province of Camarines Sur of the Bicol region. This sandbar is the 6th longest sandbar of the Philippines. (coordinates N13.93901° E123.83624°)

At the hinterland of the town of Calauag in Quezon is Pasig island to where a 670.23-meter long sandbar extends on its southern tip. Pasig Island is located at the southern portion of Lamon Bay and possesses the 5th longest sandbar in the Philippines.  (coordinates  N14.1582° E122.1555°)

At the southern tip of Bugsuk Island, in the vicinity of the southernmost tip of the province of Palawan, lies the finest white sand of the country and also extends to about 956.95 meters. Queen Helen Sandbar is the 1-km long extension of Punta Sebaring beach that emerges during low tide. Queen Helen sandbar is the 4th longest sandbar of the Philippines. (coordinates N8°10'9.80" E117°16'28.63")

Adjacent to Bugsuk Island where Queen Helen sandbar is located in the island of Mansalangan; also in the southernmost archipelago of the province of Palawan. The western part of Mansalangan is a 1,012.41 meters long sandbar that emerges during low tide and is the Philippines' 3rd longest sandbar. (coordinates N8.1530° E117.2177°)

The town of Manjuyod possesses Sumapao Shoal to which 2 kilometers of its sands emerges on low tide. This 2,064.51-meter sandbar is famously known as Manjuyod Sandbar and is the 2nd longest sandbar of the Philippines.  (coordinates N9.6126° E123.1607°)

At more than 3 kilometers long - 3,128.37 meters to be exact, is undoubtedly the Philippine's longest sandbar. It extends all the way from the coconut-tree dotted white beach island of Panamanpangan to its neighboring Basibuli Island. Panampangan is located at the northernmost extremities of Celebes Sea, right at Philippine's southernmost province of Tawi-Tawi. (coordinates N5° 03.669' E120° 04.320')