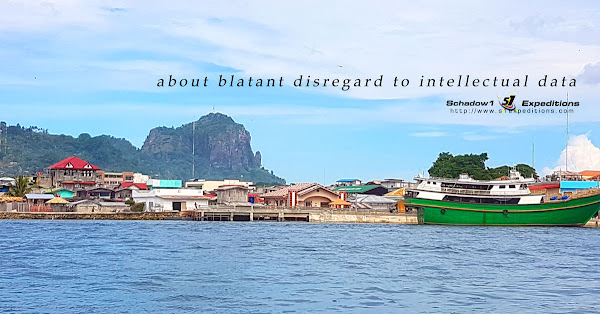 In the morning of October 6, 2017, a Friday, a newspaper publication in Davao has published an article about Tawi-Tawi. I was delighted at first to see that our efforts in May 2017 to finally open Tawi-Tawi to those who see it as war-torn as something to be proud of as Filipinos. Unfortunately, what made this day different from any other day is that we saw very similar data down to its word that was extracted from our documentation. It caught our attention and so we took a deeper look to see what might have transpired. Was it plagiarism?


Schadow1 Expeditions is a personal mapping advocacy and travel resource. Its expeditions are primarily fueled by the writer's personal earnings from its day/night regular job. Sometimes, generous readers pledge their donation as they support our cause in ensuring that a Filipino would not be a stranger to his own motherland. We usually go to places "less-traveled" and "less-mapped" in the country to provide information for Filipinos regarding those destinations.

To protect our mission, interests and of our stakeholders' support to our cause, we control and maintain the quality data we provide for the Filipinos. Thus, even though we freely share our data to make this a reality, we put up licenses to protect the soul of our mission. Most of our data are licensed as CC-BY-NC-SA (see our license page). A type of Commons license that freely allows distribution of information obtained from our expeditions,  so that it can easily be shared among Filipinos and can be modified as long as it will be attributed to its source for non-commercial purposes.

Having this license allows Filipinos to learn more about our country and also a possibility for us to earn something to fuel our expeditions and provide more interesting and new data for the Filipinos in terms of geographic, geospatial, culture and navigation.

Over the years, humanitarian and relief organizations have also sought the use of our products and data for saving more lives during disasters.

For the past years, a lot of smaller websites, blogs, and some corporations have been tempted (aware or unaware) to use our data for commercial purposes, edited our photos, removed our watermarks, copied our content and marked them as their own. Most of those caught were properly informed. Some have apologized and took down the material. Some did not respond and were reported to authorities. Most of these websites are now taken down or have paid a price for their disrespect for intellectual property.

However, what transpired on October 6, 2017, was different. It was because a long-standing news publication agency, specifically in Davao, has decided to publish an article with very similar wordings and values accurate to the decimal value from our mapping expedition in Tawi-Tawi on May 2017. Even our wrong spelling of a mountain in Languyan, Tawi-Tawi was copied. Astounding as it is, there was no citation pointing to us as the source of the data but was instead credited to its writer/editor.

When we have reported this incident to their Editor-in-chief, Stella Estremera, we received a disappointing reply - a reply which states her reporters and editors are "schooled about plagiarism", and that they have acquired the information through the tourism collateral given to them by the tourism office.


Prior to the email, the writer has sent a message mocking us and the data by saying,

"It's funny how you think that you owned "fully" those public information."

Schadow1 Expeditions provides accurate mapping data through our methodologies and tools we acquired and developed through hard work. This is then made available to the public so that it can be shared for non-commercial purposes while being properly attributed.

This explicitly does not give anyone the right to take credit on our findings and results of our expeditions. Even our expedition members in Tawi-Tawi are making strides to respect this right by asking permission and attributing data from our own expedition when it is being posted elsewhere.

And even if this news publication later claims that the information was taken from another who could have possibly committed plagiarism, they have the sworn duty as journalists to extend an extra arm to research and ensure the data is accurate or to check if some other entity might have made a study to provide such values as a form of respect to the researcher. Contrary to their claim that the writer never heard of us,  the source of the data they have published can easily be obtained through Google search; even Wikipedia cites the data to us. After all,  the data we provided is only four months old as of this writing and has not yet been adopted as a common fact when other people have also provided data with different results.

As the University of Bradford has said regarding plagiarism and facts of the world,

Due to the incredible reply and blatant disregard of the rights to intellectual property, we required the publication 4 things:

Until this point, the newspaper in Davao remains hard on their stance not to apologize nor to properly cite the data to us. While Department of Tourism is still being contacted regarding the veracity of the claim of the editor and editor-in-chief.

Writers and scientific researchers in the country must be aware that such blatant disregard of their rights is present even by long-standing newspaper publications.

On October 15. 2017, Schadow1 Expeditions filed a complaint to Civil Service Commission (8888) against Secretary Ayesha Mangudadatu-Dilangalen of  Department of Tourism - ARMM for her non-response after a week of inquiries regarding the plagiarism issue that plagues the Davao publication. The editor of Sunstar Davao claims he merely copied from the secretary and through the brochure the department provided.

On December 1, Schadow1 Expeditions received a copy of Secretary Dilangalen's explanation as well as Ace Perez's explanation regarding him pointing out the information he published "under his name" which came from (1) Sec. Dilangalen, (2) DOT Bongao Brochure, (3) Personal information he knew Panampangan was the longest sandbar "for years". (Side note: People knew Manjuyod Sandbar as the longest sandbar of the Philippines until it was disproven from our survey published in July 2017 that it was only the second and Panampangan is the longest.)

Secretary Dilangalen explained that "she did not claim ownership of the said information". And pointed out that the brochure her office printed out with the contents of a direct copy from our article about Bud Bongao was commissioned to Ian Ray Garcia, Editor of M Magazine and a columnist of Mindanao Times, to which a project proposal was made by Garcia and Rolan Emboscado of Travel Teller to include "text, photographs, and layout" worth Php 71,000.00


In spite of the awareness of both the publication - Sunstar Davao, and DOT-ARMM regarding the source of information they copied and the demand of Schadow1 Expeditions to point the data to us, they were only busy cleaning up the dirt and pointing fingers instead of doing the right thing.

Mr. Garcia and Emboscado's statement are still being sought.

Email ThisBlogThis!Share to TwitterShare to FacebookShare to Pinterest
Labels: Message