Elevation and 3D Terrain Map of the Philippines 2020 Update 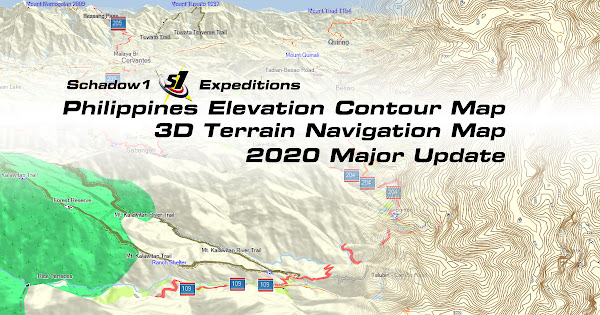 With the aim to provide our supporters and collaborators with the best available map for the country, aside from expedition-accurate navigation maps, we also provide a highly accurate topographical map of the Philippines for scientific, explorational, and military purposes. And so we released our latest high accuracy map this year based on NASADEM.


Since 2012, we have released our first ever Elevation Contour Map of the Philippines based from NASA Jet Propulsion Laboratory's Shuttle Radio Topography Mission (NASA JPL-SRTM) at 3 arcseconds (90 meters) accuracy, improving the original topo map released as open data through the "Groundtruth" Topo map of the Philippines which has many blank areas and inaccuracies.

Over the years since then, we have created maps based on improved Digital Elevation Models such as the inferior ASTER GDEM + accurate but noisy SRTM at 3 arcseconds accuracy and lately in 2015 through the release of the SRTM Global 1 arcsecond (10 meters intervals), which is already way better than the one provided by the government.

Recently, this March 2020 as NASA published its latest iteration of the SRTM digital elevation model, we also updated our Elevation Contour Map of the Philippines based on NASADEM.

The NASADEM was published in late February 2020 as a significant modernization of the digital elevation model data initially released as a product of the Shuttle Radar Topography mission 20 years ago.

The entire SRTM dataset raw sensor measurement was reprocessed using the latest technology and algorithms not available two decades ago, merging its data with the refined ASTER and GDEM V2 DEMs, and GLAS data using the SRTM mosaic application to create a seamless and void-filled NASADEM. This is in addition to the provision of several new data layers originally not available to the public by enabling radiometric correction, eliminating radar backscatter to take out foliage and structures from the topographical data.

Our newest topographical map is available for download to provide you with the most accurate and latest topographical data for off-road complexity and trail difficulty assessments during explorations and humanitarian/military operations.