It is a very long drive and I am prepared for it. Covering 600 kilometers of road from my home to Pagudpud, I am excited to travel for the first time to my never been explored northern Philippines. With only having an hour of sleep, we woke up at 2:00AM and started to head on to the road at 3:00AM. It is going to be a hell of a road trip!

We are already at Pozzurubio, Pangasinan when sunrise has greeted us at 6:10AM and we are still only a third of our road length. By 6:40AM, La Union has greeted us hello.


La Union is a very long province. It is like I was driving forever and still I'm on the same province. La Union is known for its long beaches and strong waves as it is by the edge of the West Philippine sea. Because of this, surfing and wake boarding enthusiast choose La Union as one of the surfing destinations in Luzon.

At 9:20 AM, we finally reached Ilocos Sur and passed by one of its progressive city, Candon an hour later. I'm quite impressed with this city because even this city is mostly rural, government facilities are mature and malls and fast food just like in Manila is everywhere. In fact, this is where I choose to stop over when I was getting back to Manila.


By 11:30AM, we have finally reached the wide Abra river and was in awe with the scene when we have driven over the Quirino Bridge.


At lunch time, we have finally reached Ilocos Sur's capital, Vigan and made our way to Calle Crisologo or the Vigan Heritage Village. This area is a national heritage as the architecture and road made of cobblestones has been preserved as how it looked like way back the Spanish colonization era of the Philippines. It is truly like traveling through time when you are there.

So as expected, we had taken our photos to satisfy on bringing our memories from this trip. 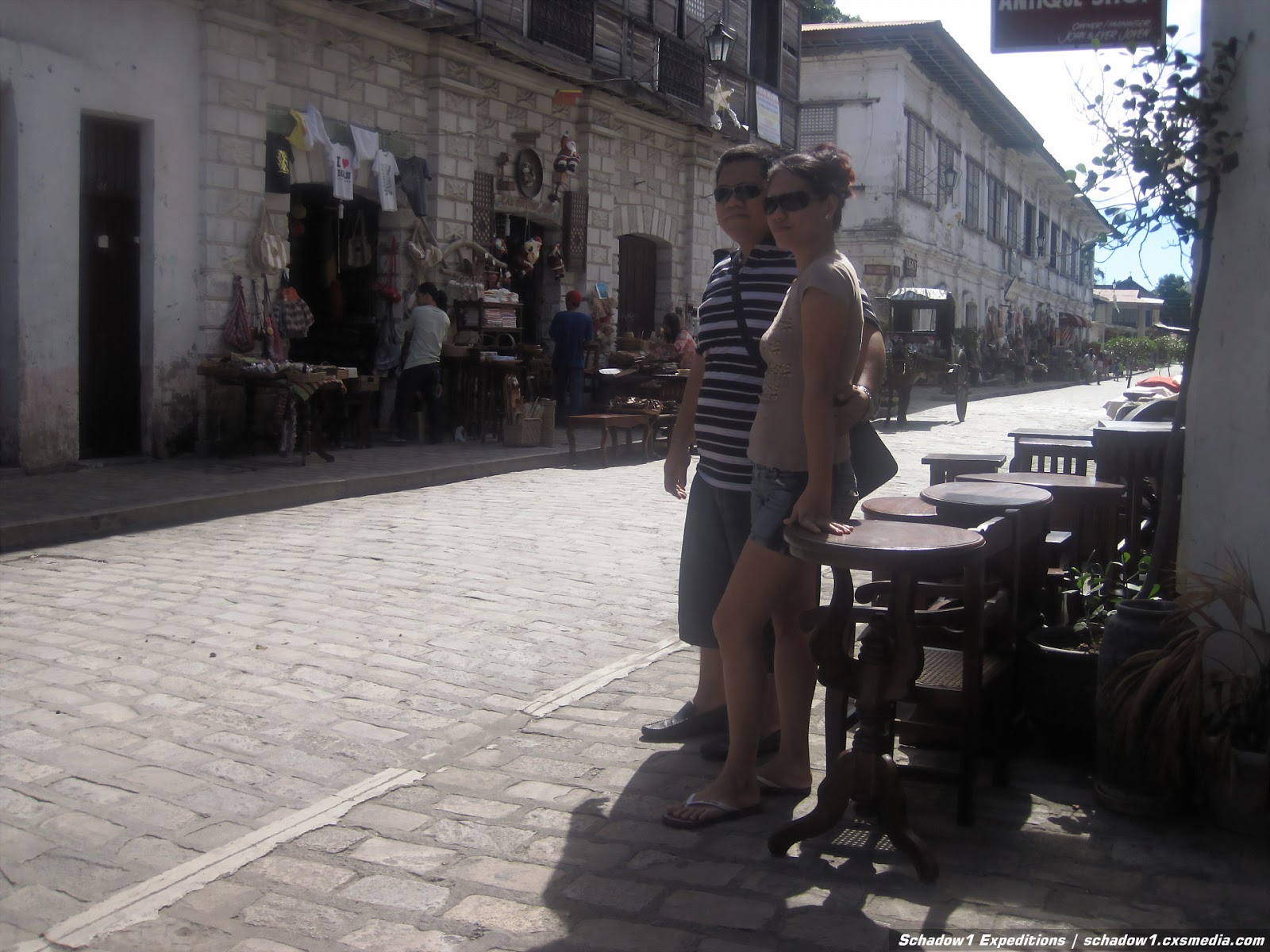 We had our lunch on one of the carinderia along the street called Tummy Talk. Nothing fancy, as we only want to energize ourselves from the long drive we had and to come. And I'm also quite surprised that even small carinderia in the area is maintaining the architecture of their homes during the colonial era. Then we bought souvenirs at Island Souvenirs shop which is also just beside the carinderia.

An hour later, we proceeded with our long drive and upon arriving San Nicolas, Ilocos Norte, we where re-routed due its town fiesta and had to drive along "pilapil" or small unpaved roads in the middle of a farm area.

At 3:00PM after 12 hours of drive, we have reached Ilocos Norte's capital, Laoag City.

From Laoag city, you'll be passing around towns where the main product is salt production as this town is already a coastal town bordering the West Philippine sea and the northern Balintang Channel of the Philippines. An hour away, the next great scenery is at Burgos, Ilocos Norte where here stands a 19th century lighthouse which was used to guide ships to move away from sharp-stoned shores of Burgos.

Cape Bojeador lighthouse stands on top of a hill in Burgos along Purok Bannawag where you will sure grandeur with the beauty of the town and the Balintang channel shores. Climbing the light beacon is prohibited when we went there due to structural issues however the view from the balcony is already awesome. Parking area is available on top of the hill by the base of the lighthouse. 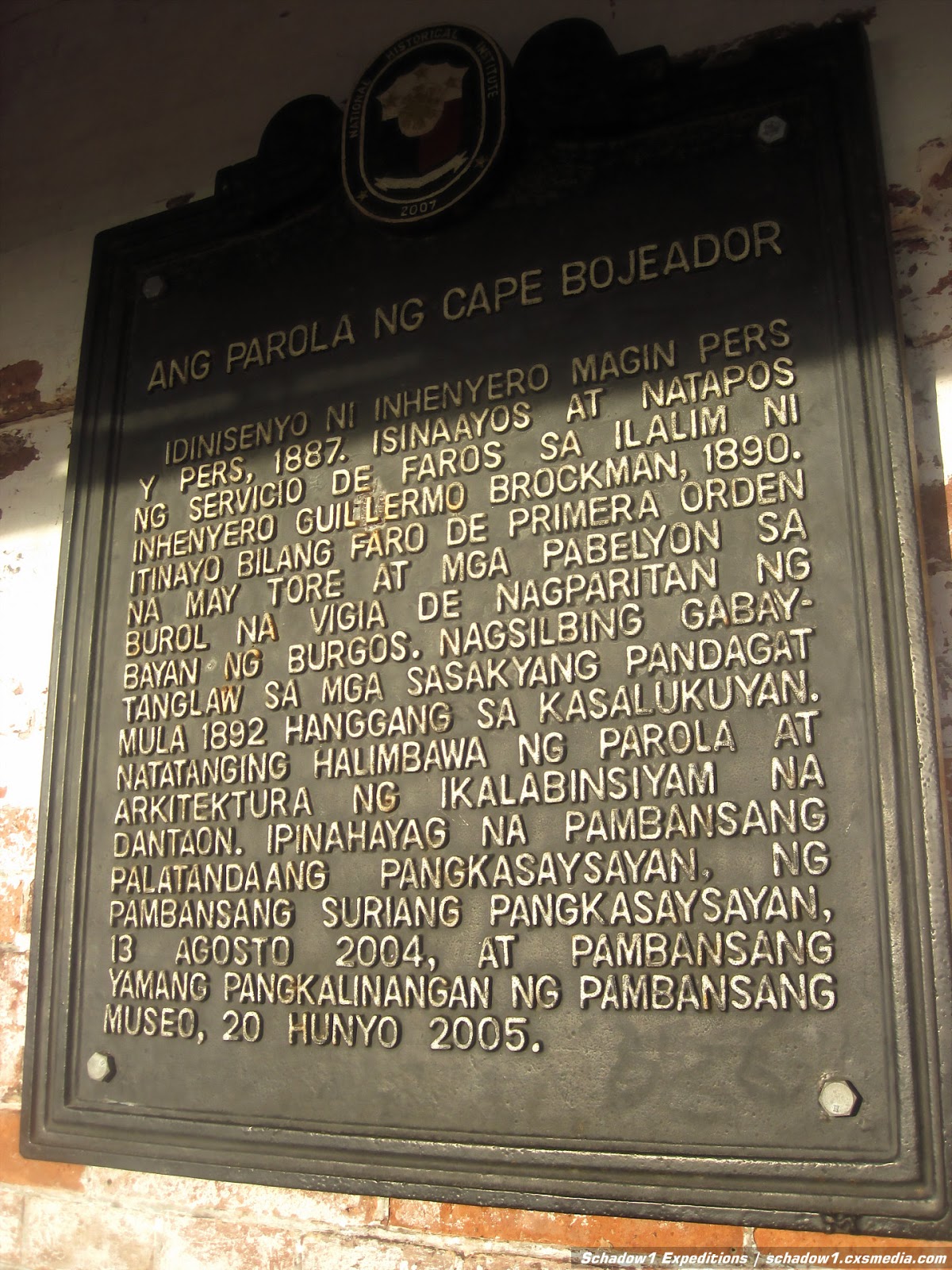 We then headed down and not too far from Cape Bojeador, you can stop by the side of the highway at Purok Bannawag to enjoy the scenery as the highway itself is already the shoreline of Balintang channel.


Next stop is still in Burgos, Ilocos Norte and you have to turn left to a 3.5km 4x4 trail to reach the parking area for the Kapupurawan Rock Formation.


The Kapurpurawan (en. super white) rock formation is a rock formation that was smoothened for thousands of years due to the strong and continuous wind along the Balintang channel shoreline. It is almost sunset when we arrived and so we need to hurry up so we only took a picture of the rock formation from afar.

We then headed on and continued driving to the north as it is getting dark and there was no electricity during the time. We passed by Bangui and then Pagudpud then hurled on to the northern tip of Luzon at Maira-ira point by 7:30PM.

The Maira-Ira point can be reached when you continue to head north and turn left by the Gamaban Junction, just before you reach Patapat viaduct. You would have to go down to an unpaved road as Maira-ira is by the foot of the hills of Pagudpud.

We stayed at Hannah Beach resort and reserved for a 3-day, 2-night stay with free meals for P9500/2pax.
This hotel is just by the shore of the Maira-Ira beach or famously known as Blue Lagoon of Pagudpud, Ilocos Norte.

Although the food is great with a lot of choices, what I didn't like here is that there is no Wi-Fi available. However 3G internet is available for only one network... Smart Communications. Other cellular network is not available.


As I am already dead tired for driving almost 18 hours with only an hour of sleep last night, I had a fast dinner then head on to have a great sleep.

We woke up at 7:00AM and had our breakfast and then we headed immediately to the beach and enjoyed the white sand and strong waves at this hidden beach at the norther tip of Luzon


After we got ourselves with the beach bum experience of the north, we then head back to the road and see more sights of Pagudpud. 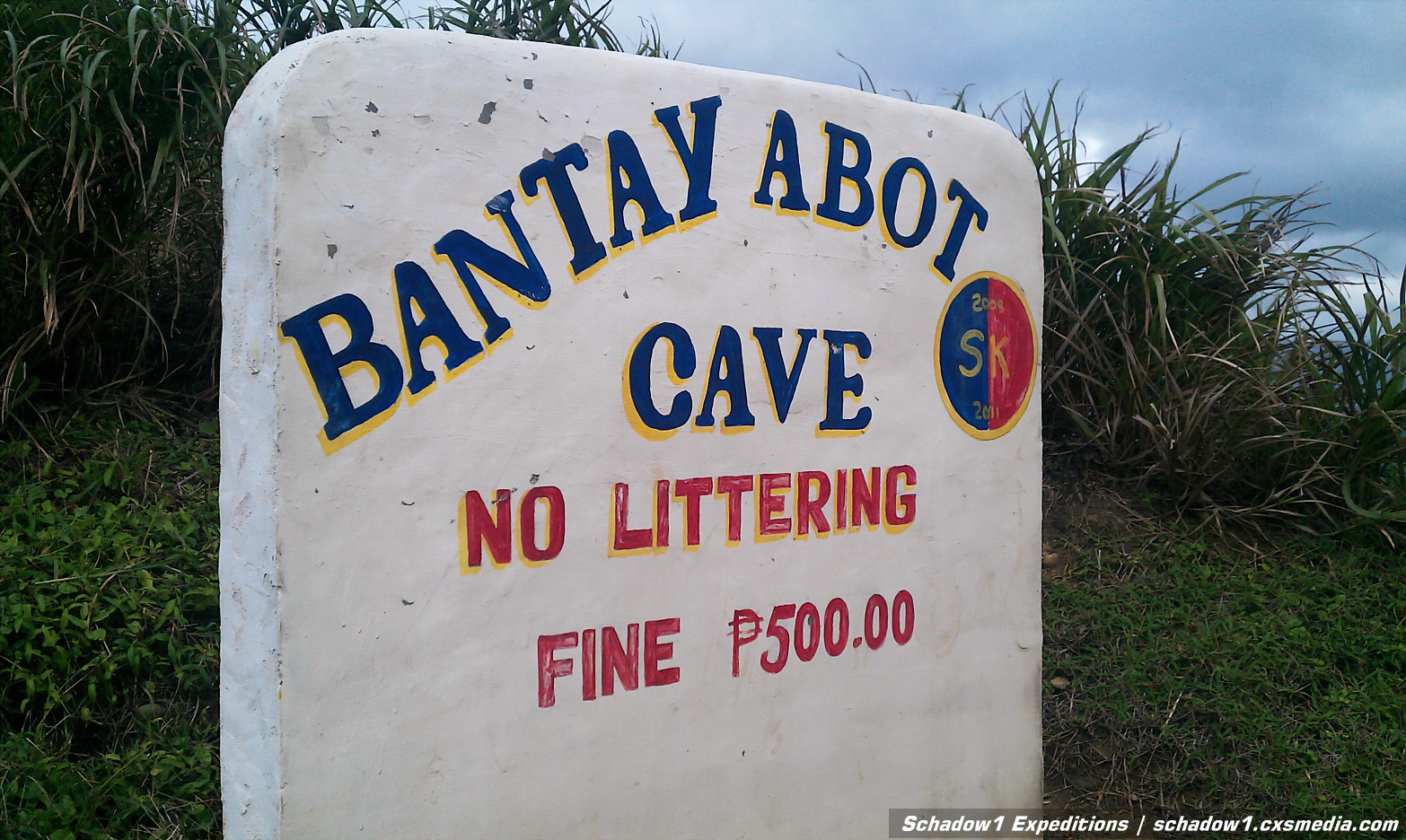 Then we proceeded to Patapat Viaduct, the longest and northernmost viaduct of the Philippines where it links Ilocos to Cagayan. The view again is breathtaking and you can stop by the falls to take pictures of the Balintang Channel shore. Along this viaduct, you can also see the MV Nam Yang 8 shipwreck and is also a scenic view


Heading straight will get you to Aqua Grande or Aqua Paradiso. It is a scenic picnic area where water streams down to the Balintang Channel. 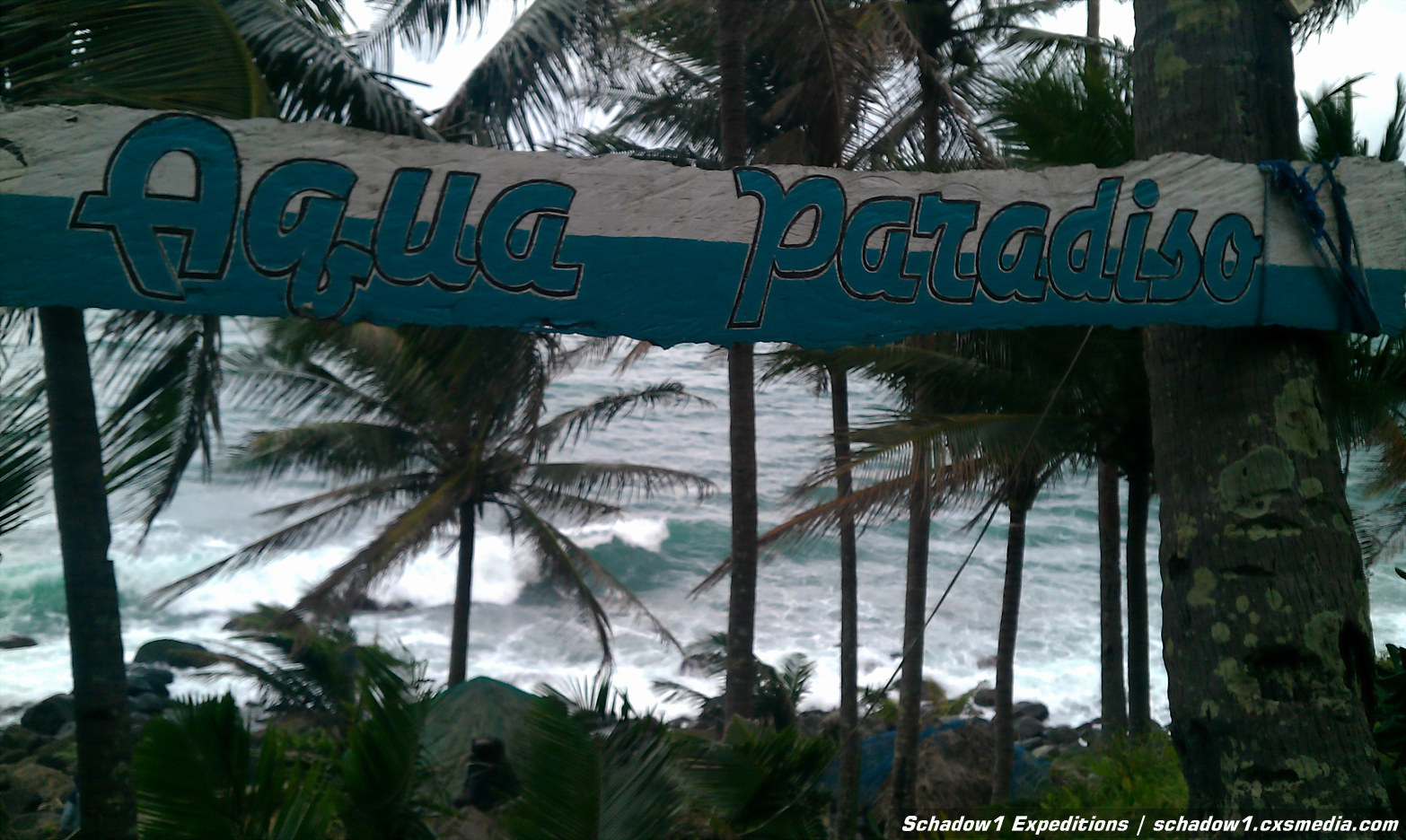 Then you can buy souvenirs and authentic Ilocos food by the Patapat grotto about 856 meters away from Aqua Grande via Patapat Viaduct.


After a day of scenic views at Pagudpud, we then head back to our hotel and call it a day.

It is check out day from the hotel we stayed. As much as we want to try Saud Beach in Pagudpud, we already lacked funds so we head on and got back to Bangui for the scenic Windmills. Bangui Windmills is gigantic enough to be seen from Maharlika highway so you won't be lost. Just look for the sign to Bangui windmills which is at your right when coming from Pagudpud. It is a 1.6km rough road ride from the highway. 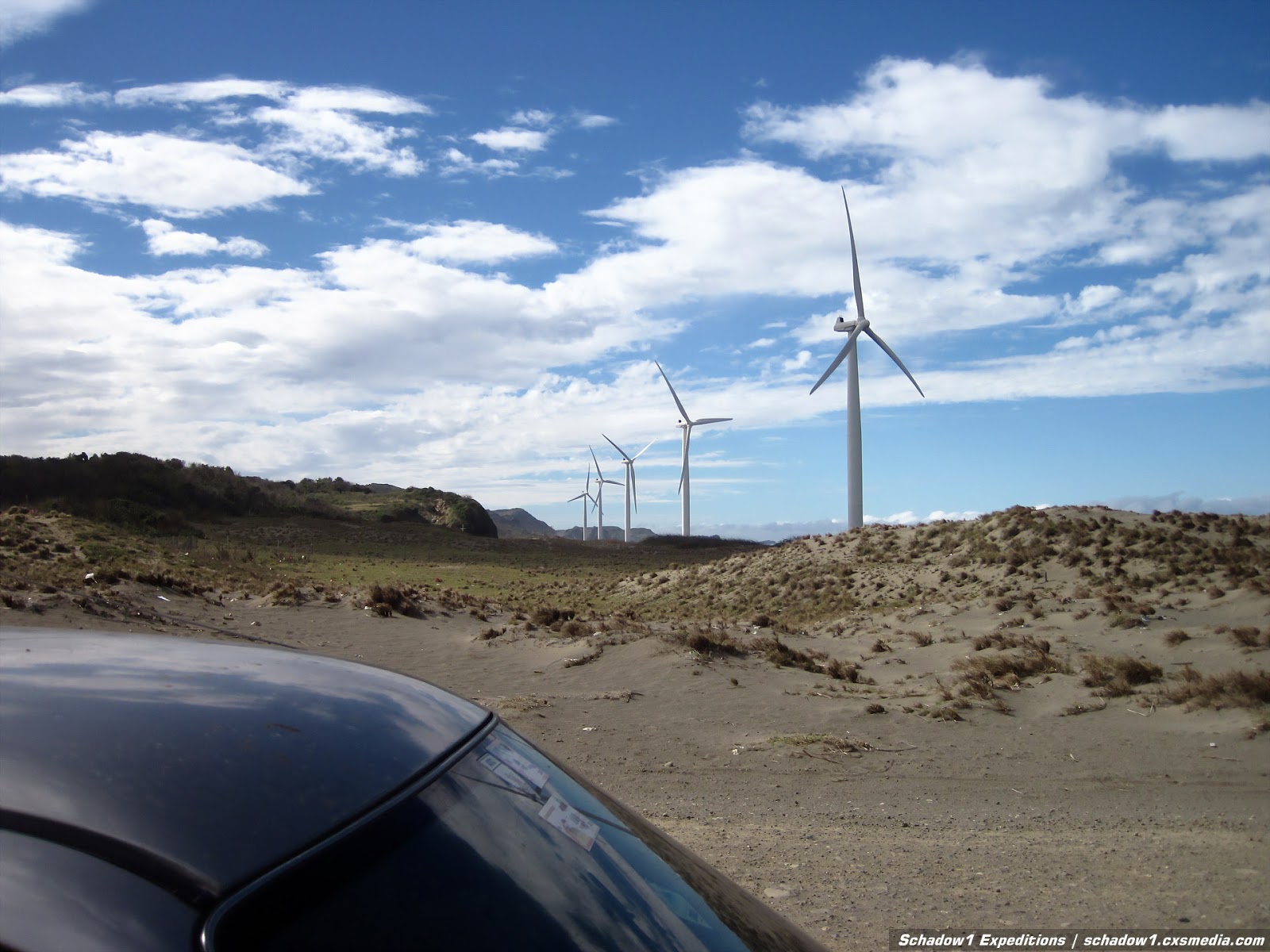 
That ended our Ilocos Road trip then we hurled down again for a long ride back home to Manila.

The Ilocos road trip is my special road trip for 2011 for which waypoints and new tracks were contributed to the +OpenStreetMap Philippines for future use of travelers and drivers who would like to check out the region.