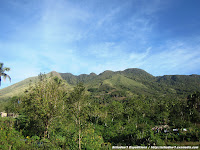 Mt. Cristobal is one of the towering mountains of Quezon, bordered by two provinces namely Laguna and Quezon. It is a dormant volcano and is known to be one of the challenging climbs in the Philippines due its forested trails, continuous 9-kilometer assault varying from 60 to 90 degrees inclination. And this climb happened to be the first major climb of Schadow1 Expeditions for its mapping advocacy.


Cristobal is part of the Banahaw and San Cristobal National Park as declared by the government via Republic Act 9847. Banahaw and Cristobal are twin mountains; and referencing through its folklore, Banahaw is the good mountain while Cristobal is its alter-ego, the Devil's Mountain.

Climbing Cristobal is a reunion for myself. Having Banahaw as the first ever mountain I climbed 24 years ago, this climb made me reminisce my childhood. Unfortunately, Banahaw is still closed due to environmental reasons so this is the closest I can get. And this climb is not an easy one due to its challenging trail as compared to Banahaw even if Cristobal is 700 meters shorter than the latter.

Right after coming from work, my wife and I headed on to Dolores, Quezon for our mapping expedition at Cristobal. It was a 3-hour drive from our home in Cavite, leaving at 4:30AM and reaching the Cristobal jump-off at 7:30AM. We proceeded to our climb immediately.

The initial jump-off is the one at Barangay Langka where there is a sari-sari store that is also used as a registration area for the climb. They charge P10 for the registration fee. Or you can bypass it and drive 760 meters more, all the way up to Montelibano's house where you can register there if you haven't registered at Langka. The road to the house is alternately paved and is steep, so make sure that your vehicle can make it. If not, Barangay Langka is sufficient. It seems that they are not strict with registration as they don't oblige us to. However I do recommend doing it as a donation for allowing their house to be used as a clean-up area. Both jump-off can accommodate limited parking spaces and parking fee is optional. I personally paid P50 to one of the house I used as a parking area at Barangay Langka jump-off then trekked all the way up.

Barangay Langka may offer you guides as well and costs P500 per day. Getting guides and porter services is optional.

The trek at Barangay Langka starts at 630 MASL and is a 750 meter trek until Montelibano's stop-over house at 828 MASL, the place where I consider as the real jump-off as the challenge starts here. You will be welcomed with sunflowers along the trail while the area is mostly a vegetable farm.

From Montelibano's house, the challenge starts and you will be greeted with dense foliage and continuous assault. Civet droppings can also be found as you go up where Batangas coffee is made.

As you go further, trail gets steeper, forest becomes more dense and temperature gets colder eventhough the sun is high up. As you reach 1198 MASL, you will be seeing a line of Giant Miscanthus and this is where the treacherous thorn plants named as Teka-Teka becomes noticeable as well. Teka-teka's name was derived from a tagalog phrase which means "wait" in English because you'll surely say this to your climb mates when you are caught by its thorns.

As you reach this elevation, it means that you are already half-way to the summit.

Due to the seemingly never-ending challenge of the Cristobal trail, I suffered the most painful leg cramps for the first time. It was painful however, it was expected as this is my major climb. And so this made us reach the crater campsite after 6 hours. An hour late from the average 5-hour climb by experienced mountaineers to this mountain.

After going up the crater ridge and back down for the crater, at 3:00 PM, we reached the Cristobal crater at 1402 MASL.

The crater is as expected, densely forested; and as the sun seldom heats up this area, the trail is muddy and soft however there is an area that can be used as a campsite if the summit is too windy. However, the use of the crater as a campsite is not recommended when raining as it gets flooded.


We had our brunch at Cristobal's crater at 3:00PM and headed on to continue our climb at 4:00PM. 15 minutes later we were already at the main campsite called Bulwagan Saddle at 1425 MASL.


The campsite is always windy even if the sun is all up. The temperature starts to be chilly right before sunset until after sunrise so make sure to bring your jackets. Upon my estimate, it is about 6-12 degrees celsius during our stay eventhough it was a clear night.

After setting out our tent, we then continued to get to the main viewpoint of Cristobal which is a "mistaken" summit. Gideon Lasco of Pinoy Mountaineer has called this location as "Jones Peak" referring to his friend who got injured at this area. The elevation is 1463 MASL, about 7 meters elevation short to the real summit of Cristobal.

The viewpoint is 15 minutes away from the Bulwagan Saddle and you would pass through a swath of giant miscanthus. A small campsite that can hold 2-3 tents is also possible along this area.

This viewpoint offers the best view of the surrounding mountains and the magnificent 7 lakes of San Pablo, Laguna. These lakes were a result of pre-historic meteorites. A great reward after 6 hours of strenuous climb.


From the peak, you would be greeted with the Malarayat mountain range (which comprise of Manabu, Susung Dalaga, Bagwis, and Malipunyo) to your left and Maculot at far left. To your northwest is Sembrano and Tagapo and to your north is Makiling and the Nagcarlan mountain range (which comprise of Kalisungan, Atimbia, Mabilog and Imoc). Below you is the Tayak Hill (660MASL) which was used as supplies drop-off point for guerillas during the World War II and is now a religious site for Catholics where its hilltop stands a cross.


After an hour of photo shoots, we then headed back to our campsite to indulge sleep-deprived bodies for a long sleep. It was very cold and very windy the whole night.

We then woke up at 7:00AM and is still very cold even though the sun is already up. I then geared up to map up the trail to Cristobal's real summit. However a lot of mountaineers have told me that the summit is unreachable but I still tried to check if a trail is available and went on alone. As the area is seldom trekked, the trail is no longer visible and a lot of teka-teka plants has already block the path. I reached the summit within 30 minutes from the Bulwagan Saddle.

From the summit, you would have a window to see Polilio Islands from afar however it was very windy, foggy and cold with zero visibility.


I got lost thrice but still reached the Bulwagan saddle after 45 minutes. After which, I then headed on for a heavy breakfast to re-supply ourselves for the long way back down.


We packed up and left Bulwagan Saddle at 8:40AM. However it rained while we were on the way back and due to its steep and slippy areas, I had a share of various experience of butt-challenging and knee-breaking falls and slides. We were back to Montelibano's house after 6 hours at around 2:40PM. We freshen and cleaned up before we continue our trek down to Barangay Langka.

From the point-of-view of a first major climb mountaineer, Cristobal is twice the difficulty of Maculot with forest coverage the same as of Malipunyo; and some rocky trails the same as Pico De Loro and Maculot. And the reward is a spectacular view of the Southern Tagalog Region.

The locals are friendly, and there is no one among them competing for the "ownership" of the mountain. Fees, if it can be called as one, is donation-driven. The way it should be. Trails are generally clean and as such, it may mean that most people who climb here are "mountaineers by heart". This mountain destination, personally, is a role model for the past 16 mountains I have climbed as of this writing.

The data gathered in this Mt. Cristobal climb has been contributed to the +OpenStreetMap Philippines  project for free use of mountaineers who plan to climb this mountain with GPS assistance.