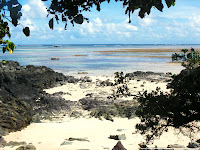 Facing the edge of the Pacific Ocean lies a vast golden sand beach only known to a few. Schadow1 Expeditions was lucky enough to be there to discover one of the hidden paradise of eastern Luzon. About a hundred kilometers away from the shores of northern Quezon province lies an island gifted with golden sands... the Kanaway Beach.

The Kanaway beach is located at Sitio Petisan of Barangay Apad, the easternmost side of Jomalig island that is facing the edge of Pacific Ocean, just beside the Kanaway River.

The beach is composed of vast golden sands stretching to about 400 meters from the shore with nearby islets that are accessible by foot during low tide or a short wade or swim on high tide. The sand has natural ripple formations which is a captivating sight to behold. The golden sand feature is due to the corals abundant near its shores called Acropora caroliniana. The beach is protected by corals and stone formations about 700 meters away from the shore which blocks strong waves from the Pacific Ocean.


There are two islets that you can go to while at this beach. The nearest is the Pulo Islet and next to it is the Manlanat Islets. Both are the best places to bum around.

The best time to get here is early morning right before sunrise so you can watch the magnificent sun as it rises against the vast golden shore of the beach.

There are no convenience stores available as such you may need to buy fresh fish, rice, and charcoal along the way at Barangay Apad and grill it by the side of the beach. There is a nearby residential area to where you may ask permission to temporarily use their shade for picnic. As of the time this article is written, there are still no resorts or establishments along the area. Kanaway beach is where you want to be if you want to enjoy a serene and untouched beauty of nature 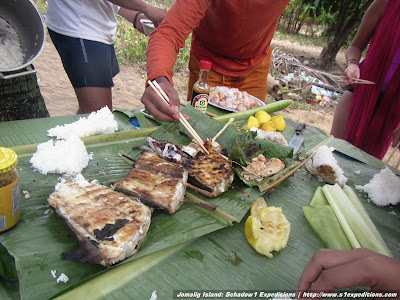 How to get to Kanaway:
Coming from Manila, you need to ride a bus going to Infanta, Quezon (usually Raymond Bus terminal along Legarda St. corner Nagtahan) for 3 hours. You then need to drop off at Real, Quezon's fish port and get a boat to Patnanungan. Boats to Patnanungan leaves daily at 11:00AM and travel time is around 5 hours. Near the shore of Patnanungan Island, you need to hire another boat that will send you to Jomalig Island. Boat transfer happens at the middle of the ocean so be prepared. You may reach Jomalig's main port at Barangay Talisoy after an hour. From there, ask the locals to where you can hire a multicab (small vans) or a motorcycle to give you a ride to Kanaway beach which is an hour ride away.

For more information regarding the itinerary to Jomalig Island and its Kanaway beach, you may go to our main article, Discovering Jomalig: The Golden Island of Eastern Luzon.