Malibiclibic Falls - A Hidden Falls below the grasslands of Cavite 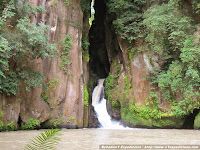 Who would know that a waterfalls exists in Cavite which is primarily a flat land to which most agricultural areas are now being developed for residential areas? Well, waterfalls do exist. In fact there are a couple of them. One of them which is intriguing is Malibiclibic Falls. Located at Aguinaldo, Cavite, near the foot of Mt. Mataas na Gulod. Hidden as it is accessible by hiking a steep descent from one of its grasslands.

Malibiclibic Falls is a result of a convergence between three rivers flowing from Magallanes, Aguinaldo, and Maragondon, Cavite. To which due to millions of years of the three rivers pounding a 100-meter high cliff, the water found its way through it; thus creating a waterfall.

The Malibiclibic Falls can be accessed by walking through a 1.2-kilometer 4x4 trail from the Maragondon-Aguinaldo national road until you reach a graze land. The entrance to the track is at Barangay Lumipa and about 2.64 kilometers before the main Aguinaldo town if you are coming from Maragondon. From the graze land, you need to descend to a slippery soil and moss-covered boulders. The trail down to the falls is not that clear as the falls is seldom accessed by hikers. The trek is about 612 meters and about a hundred meters down.


It is rainy season and while we were there, a thunderstorm is currently pounding the area. The water is murky brown as the current is strong when we were there. And so we need to climb for our life along the slippery boulders at its side so that we can reach the waterfalls. The best time to get to the falls is from February to April when the current is not that strong and the water is clear.

After about an hour of trek, we finally reached the Malibiclibic Falls.

In summary, the trail to Malibiclibic is arduous on a rainy season due to slippery rocks and steep inclination. The waterfalls seems to look shallow but the base of the falls itself is deep according to some accounts of people who have already been here. Do not be lured by its murky waters as you could not see the bottom of the stream. Always prepare if you would like to swim through it.

Our trek to Malibiclibic Falls has generated GPS traces and has been contributed to +OpenStreetMap Philippines for use of hikers and outdoor enthusiasts so that the hidden falls can be accessed without getting lost.