How the Philippines as an Archipelago Emerged 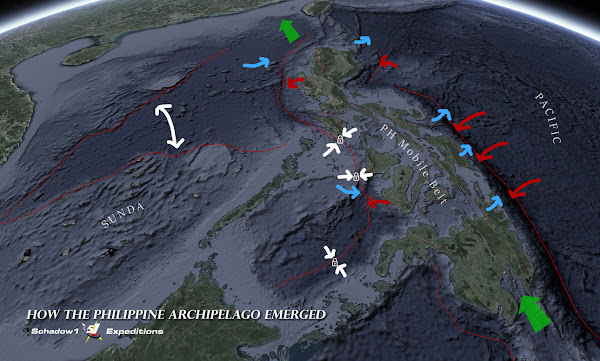 According to Philippine folklore, the country came out to be made of 7,641 islands (in low tide) due to a conjugal fight between two giants from Ilocos, named Angalo and Angarab. Legends are part of our culture, however, it is best to have our next generation know the scientific reason behind it so they will be more intellectually involved in how our islands came about. One would be surprised that a nearby island may be a distant neighbor millions of years ago.

Millions of years ago, the world is only made up of one supercontinent called Pangaea. And due to continental drift, Pangaea has separated to the modern day 7 continents.

The first Philippine island showed up about 60 million years ago. It is the island of Mindoro and Palawan which is very near the island of present-day Taiwan.

Due to geological and plate tectonic evolution, primarily due to the Pacific plate and Australian plate moving inward to the Asian plate; the island of Luzon and Mindanao started to show up and became an intersection of complex collisions between tectonic plates. This area is then called the Philippine Mobile Plate.

It was only about 30 million years ago when the Indian plate has started to collide with the Asian plate, then, created a tear to which the now West Philippine Sea developed and pushing the solitary Mindoro and Palawan Island closer to the newly developed Luzon and Mindanao islands. The Pacific, Australian and Indian plate continued to push inward to Asia thus creating 7, 641 islands of the now, Philippines.

Palawan and the Calamianes have been caught on a standstill between the southward movement of the Sunda Plate and the northern push of the Philippine mobile belt thus making Palawan currently as the most "stable" crust within the Philippine territory having only very rare earthquakes.

The Pacific plate continues to move westward creating a rise of under ocean surface east of Dinapigue, Isabela. In a million years, this rise will add up to the territory of the Philippines. An island as big as Luzon... the Benham Rise (now called Philippine Rise).

Below is an animation of how the Asian plate moved in every million of years thus allowing the modern day Philippines to come about.