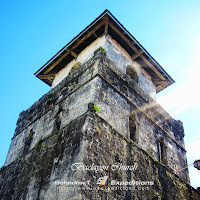 Constructed in 1724, the Baclayon Church of Bohol stands as the oldest church in the Philippines and was built as the first parish church of Jesuit missionaries in the Philippines. The structure is not only the religious capital of Baclayon for the Catholics but as a world heritage site for Boholanos and the Filipinos. The church is listed as one by the United Nations as a cultural importance for the Philippines. We have been to this church as part of our mapping expedition in Bohol last 2010.


The Baclayon Church, stands at about 7 kilometers east of Tagbilaran city, Bohol Island's capital city. It is just passed the junction to Panglao Island - the province's capital of captivating white beaches and shallow waters. The church facing the south shores of Bohol and has been the center of religious activity of the town for centuries.

The church is made up of pulverized corals and limestones that were made intact by using egg yolks donated by the villagers. It has withstood various calamities such as storms and earthquakes for hundreds of years; even withstood World War II. However last October 15, 2013 a 7.2 magnitude shallow earthquake to which the epicenter is only about 32.73 kilometers away have destroyed half of the church including its belfry.

Schadow1 Expeditions was lucky enough to get a glimpse of this church 3 years ago and experience the architecture handed over to us by our ancestors before its destruction yesterday.

The church is naturally cold inside even if the sun is all up at noon because of its limestone walls. A museum is open at the east wing of the church which shows its history and how it was constructed. The church was originally built last 1595 but was raided by Moros around 1600 which prompted them to build a stronger church farther in land. By 1724 the construction of the present-day church was constructed and was finished around 1730. And due to the church's dimension, the church gained popularity and was promoted as a parish by 1742. The church has withstood wars, storms and earthquake. But was not able to withstand the quake this year.

The photos below were some of the last images we took from our camera before the batteries ran out. The church was the last of our itinerary that day after an 8-hour road trip around Bohol's tourists spots.

The church features the artistry on every angles and corners which is prevalent during the Spanish colonial era of the Philippines. Even its windows are adorned with translucent colors that adds artistry as light from the sun peeks through its windows.


Outside the church is a 21-meter belltower which notifies the village during masses and other local cultural and Catholic events of Baclayon, including warnings from impending danger.

You can also notice the pillar at the side of the church which according to locals is a miracle to which the face of the famous parish priest of Baclayon has been imprinted there by nature.


Half of the church has been destroyed and the bell tower is now gone after the strong earthquake that shook it. As of the time of this article was written, strong aftershocks are still being felt over the area and engineers have not yet established data if the structure can still be restored.


Baclayon Church and the tourist spots and establishments around the province of Bohol has been mapped by Schadow1 Expeditions on our mapping expedition of Bohol last 2010 as part of our advocacy in ensuring that a Filipino must not be a stranger to his motherland. Additionally, mapping data donated by DTI GIZ Private Sector Promotion Program (SMEDSEP)  has been uploaded last 2012 to both +OpenStreetMap Philippines and RoadGuide.ph.