Predicting Floods in the Philippines Like a Pro by using Maps 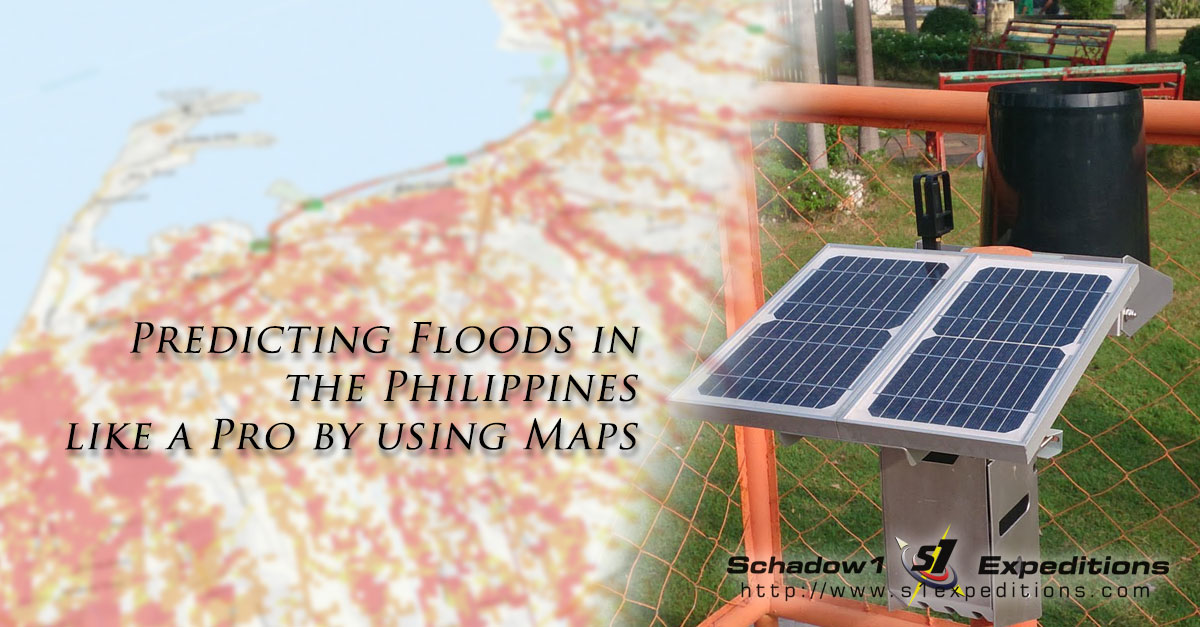 Philippines being a tropical country situated at the edge of the west Pacific Ocean is always battered by storms and intense precipitation brought about by the southwest monsoon from June to December. And low-lying lands are mostly prone to inundation during extreme rains. This guide aims to specify which locations are prone to flooding and how to pinpoint if a certain location can possibly be flooded during the precise moment where there is rain.

There are already tools available in the internet that shows probability of floods on some areas in the Philippines. Thanks to DOST-Project NOAH for integrating all available sensors by PAGASA into an easily viewable and available resource for real-time weather events; and for projects initiated by University of the Philippines National Institute of Geological Sciences, specifically on using SRTM elevation contour data, rain volume, and flow dynamics virtualization to map out flood prone areas in the country through nababaha.com. Although the latter is being replaced by the more accurate LiDAR sensing technology to generate elevation contours. Using all these tools, we just add up common sense and we get to be like "professional" flood predictors.

Flooding is caused by rain water being accumulated in a natural "basin" or "floodplain" as the in-flow is greater than the out-flow rate. Comparing it to a water container with a hole at its base but the rate of filling it up with water is faster than the rate on how the water escapes from the hole near its base which would cause it to over flow in time. The water container is the elevation contour while the hole is the mouth of rivers or drainage systems while the water to fill it up is the rainfall. 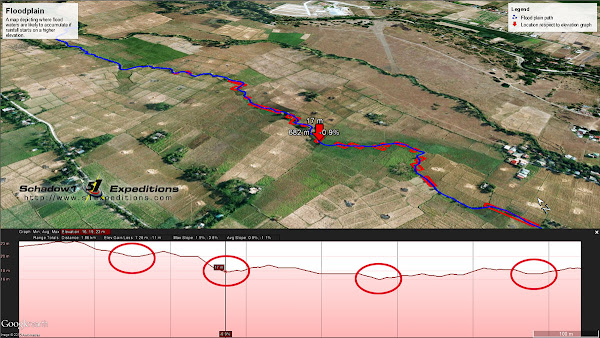 Let us take the province of Cavite as an example as it is the most straightforward elevation contour sample we can think of. The whole province is like a "slide" having its highest elevation at 680 meters above sea level at Tagaytay and lowest down the northern shores of Bacoor, Kawit, Noveleta, Rosario, Tanza and Naic right where Manila Bay is. To which water from the highlands are being transported down through "crevices" in the form of rivers and streams.

Rain water from Tagaytay flow via rivers passing through towns as it reaches Manila bay. Think of these rivers like water slides and swimming pools; where people sliding from its top part all slides down to the pool. But as the slides are parallel among each other, they do not meet while they are sliding. But they do meet as soon as they reach the pool.

An example would be during monsoon enhanced by Typhoon Maring (Trami) of 2013 where the Tres Cruzes Dam in the town of Tanza was destroyed due to heavy rainfall; to which it directly flows to the town of Naic therefore inundating it. Yet, as they run parallel to other rivers, there is no way that the dam being destroyed would ever have an effect to an adjacent town such as Imus; as flood waters that inundated Imus came from the town of Dasmariñas which is of higher elevation directly from its south.


This mixture of elevation contour and water flow gives birth to flood hazard maps and helps you pinpoint the rain sensor reading which has a direct effect on your location-of-interest. 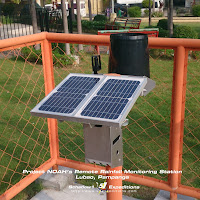 How would we be able to predict if a certain location could be flooded during a storm especially if it is indicated as a high flood hazard zone in a flood map? We can then refer to a rain water sensor available in Project NOAH and pick the nearest water sensor on a higher elevation to your location-of-interest. This is easily recognizable if you use the beta version of Project NOAH and enable the (1) Rain Gauges layer under Sensors and use the (2) OpenCycleMap later to get the idea of which nearest sensor to pick on a higher elevation. As an example, my location-of-interest is the town of General Trias and so I pick up the (3) Rain Gauge sensor at Dasmariñas which is the nearest sensor on a higher elevation. If the gauge has just reached a sustained "intense" to "torrential" strength, more likely, high flood hazard areas in the flood hazards maps relative to the sensor are highly probable to get flooded.


Aside from the rain water sensor, the Stream Gauge Sensors of Project NOAH also tell us if these main rivers are already inundated and is nearing its spill-over value thereby flooding nearby roads and residential areas. The stream gauges sensor are accessible by selecting "Sensors" and "Stream Gauges".


How come my area has not been flooded during the previous storm even though it is on a high flood hazard area?

It either means, the rainfall is not strong enough on the area, or there are still a lot of trees that hamper flood water from flowing downstream, or residential developments have not re-routed nor destroyed the natural waterways; instead, improvements have been made for the drainage system in your area.


What if I am on the road and driving and I'd like to know which areas are flooded so I can drive to another route to get to my intended location?

If you have a smartphone with data connection and GPS, download Waze app. It is a GPS-routing application coupled with a crowd-sourced real-time traffic reporting. More likely someone else using the app would report that the area is already flooded.