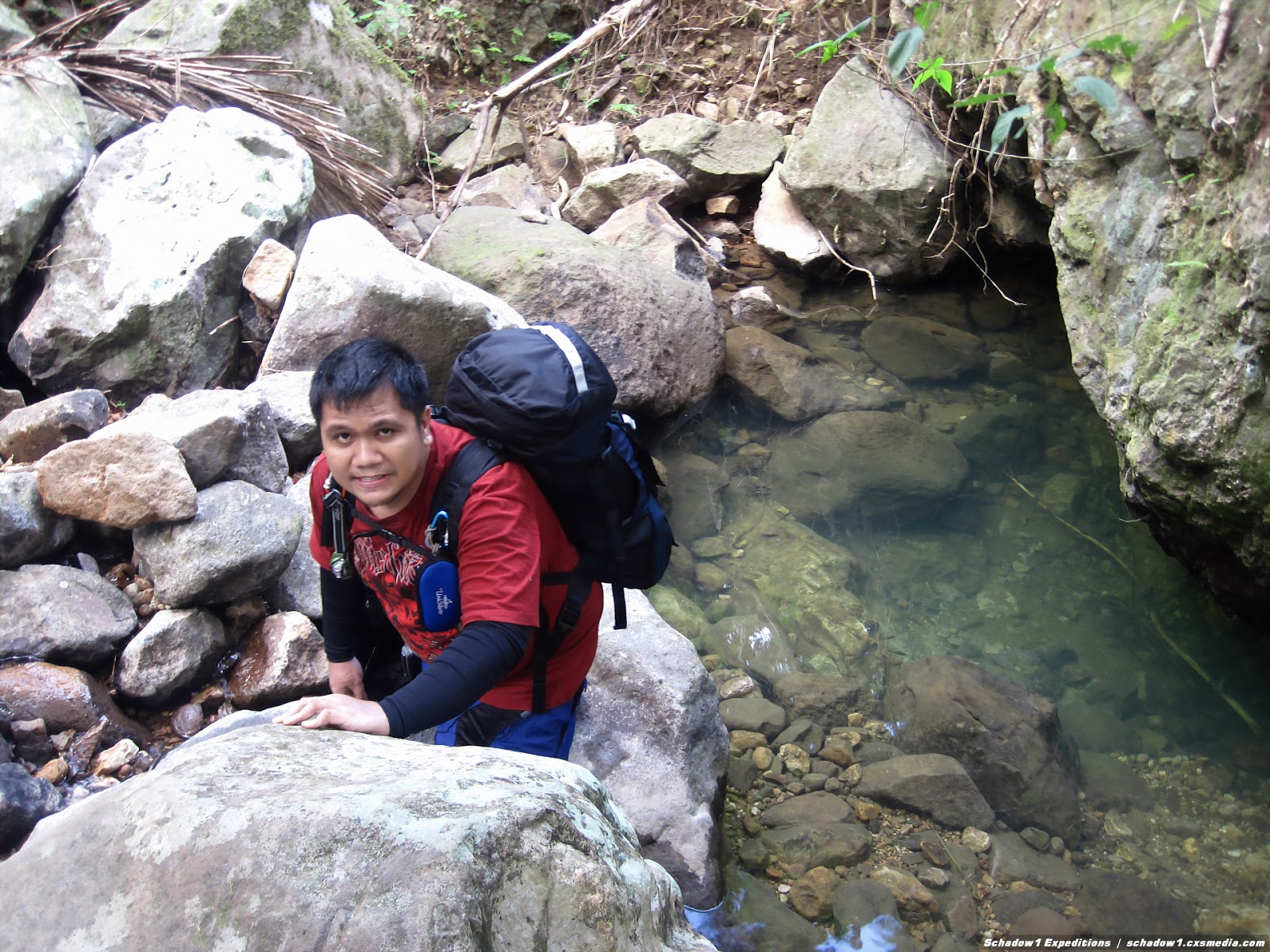 The Malepenyo Mountain Range is comprised of two major mountains: The tallest in Batangas, Mt. Malipunyo, standing at a massive 1002MASL which is situated at Lipa city, Batangas and Mt. Manabu (755MASL) at Sto. Tomas, Batangas. Upon knowing that a traverse trail between the two mountains is possible however, seldom trekked. I decided to put an end to this anxiety and decided forward to trace this path.


Initially, the plan is to try and climb Pico De Loro of Ternate, Cavite a second time with past and present office mates and at the same time to commemorate Andres Bonifacio's Martyrdom (a Philippine hero) near the place where he was executed. Due to personal reasons, most of them have backed out. So my partner and I then pursued on Manabu - Malipunyo twin hikes for the long weekend.

Misnomer for the Malepunyo Range

The Malepunyo Mountain Range is commonly known as the Malarayat Mountain Range. However this is a misnomer as this name only came about when the 90's mountaineers have been accustomed to this name due to the famous country club by the foot of this mountain range. Incidentally, Malarayat is just a hill and is part of this range.

Mt. Manabu, meanwhile, is a shortened name for the Tagalog phrase which means Mataas na Bundok (en. High Mountain) to which was named by the locals during the 80's to be able to get rid of its original name that sounds phallic to minors. The original name of this mountain is Mt. Susung Dalaga (en. Young Girl's Breast) which was then shortened by the Americans during its colonization of the country to Mt. Dalaga; as registered on GeoNet Names Server (GNS) database.

Mt. Bagwis on the other hand is the pointed cliff at the middle of the Malepunyo Range which in the long run took the name Susung-Kambing (en. Goat's Breast) due to its shape; but was then mistaken to be called as Mt. Susung Dalaga by the modern mountaineers.

Mt. Manabu jump-off is situated at the Barangay Sulok, Sta. Cruz, Sto. Tomas, Batangas while Mt. Malipunyo jump-off is at Talisay, Lipa City. According to the locals, people from Talisay are more familiar on the Malipunyo-Manabu traverse however, the expertise of Barangay Sulok tends to be limited to their own jurisdiction, which is Mt. Manabu. There are 2 known guides in Talisay: namely Rey and Mario and they both charge a P1000 and P200 for the barangay. My budget was limited during this climb yet my primary goal is to trace the Malipunyo-Manabu. Having known that Manabu campground is better than Malipunyo, I was hoping to meet some groups up there that may be interested to do a traverse so I started off with Manabu instead of Malipunyo. Unfortunately, there was none and I was left in distraught.

After an overnight stay at Manabu, I then decided to go down and check with the locals if there is anyone, even without professional experience as a guide, who can help me to traverse Malipunyo from Manabu. Fortunately, I met Mang Berting from Manabu's fork and introduced me to Kuya Barok. Barok once lived along the path of Malipunyo-Manabu trail when he was young however it was already too far for him if he will accompany us up to Malipunyo. He generously offered his help but only up to the clearing which is still half way to Malipunyo. Well, this is the best offer we had so I can accomplish plotting the trail, so I went ahead.

This mountain has an easy path and is still safe even during night hike. Its campsite is well-known. The length of hike is about 3.1 kilometers from the jump-off and most of the trail is straightforward with few assault areas.

Parking is available at the Manabu jump-off and costs P100 for an overnight stay. P20/person fee is also collected. We arrived at the jump-off at sunrise of Friday 6:30AM and met Ms. Caring Babadilla, one of the Barangay Police of Barangay Sulok, Sto. Tomas and registered for an overnight hike.

There is a fork after Station 4 where you can either go left to proceed to the grotto or right to Mang Pirying's hut where he offers free Alamid Coffee. We decided to head on to the grotto first as we were not yet that thirsty nor hungry.

We arrived at the grotto at exactly an hour after and there is a hut available to stay-over for a while beside it. 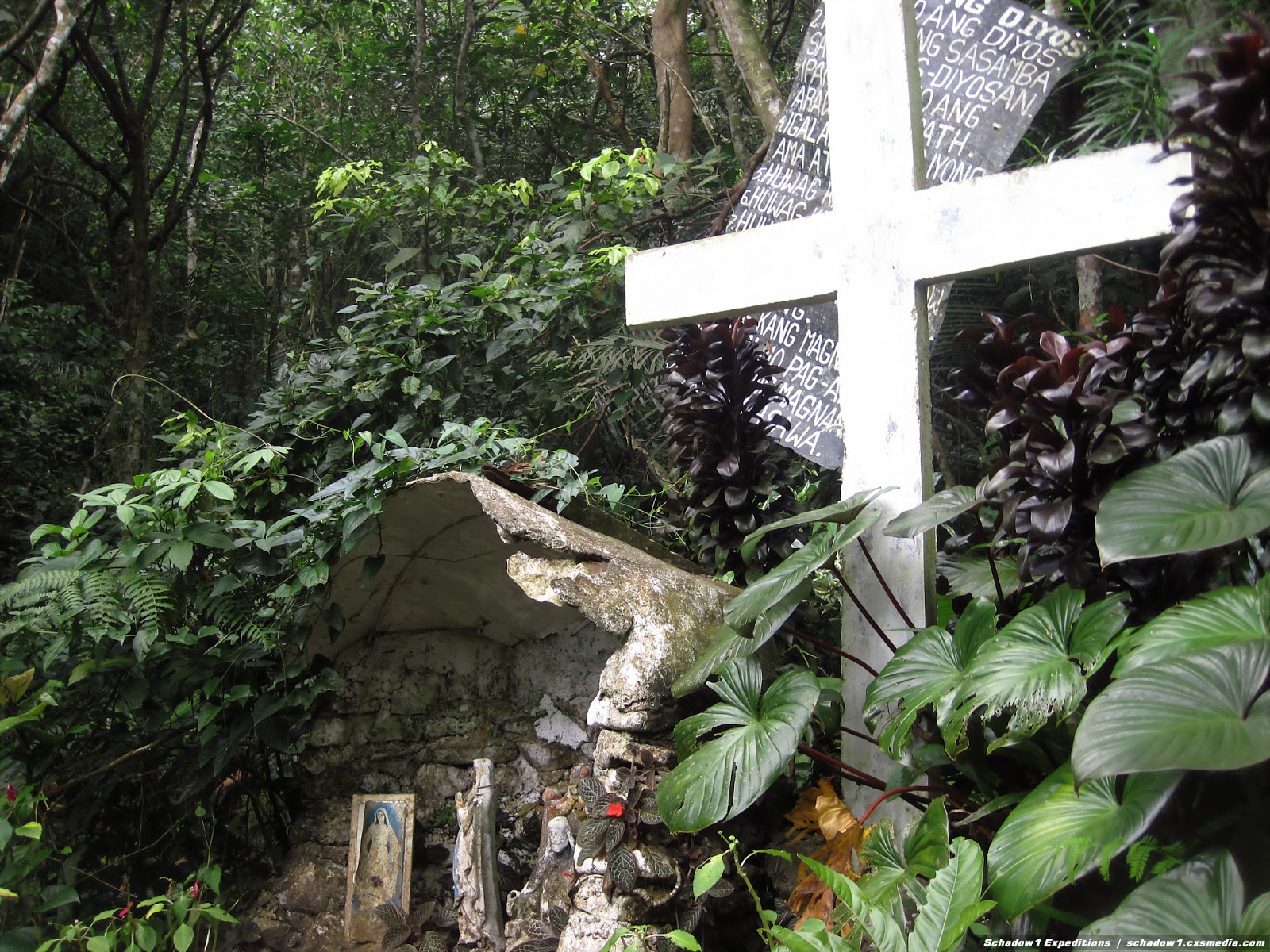 There is a clearing at 593MASL after which you will be coming up with a lot of this plant along the trail.

This plant is locally called "Teka-teka" which is derived from the tagalog phrase "Teka! Teka!" (en. Wait! Wait!) because you would really need to shout to your peers to wait for you if you are caught by the thorns of this plant.

At 9:20AM, we reached the summit and was astonished from the view of Batangas. To your north is Mt. Makiling, east is Mt. Maculot and south is the massive Mt. Malipunyo.


After which, we then headed down to the campsite without anyone around and so I spent my day sleeping as I haven't slept yet the last night. I woke up before sunset and this view greeted me. 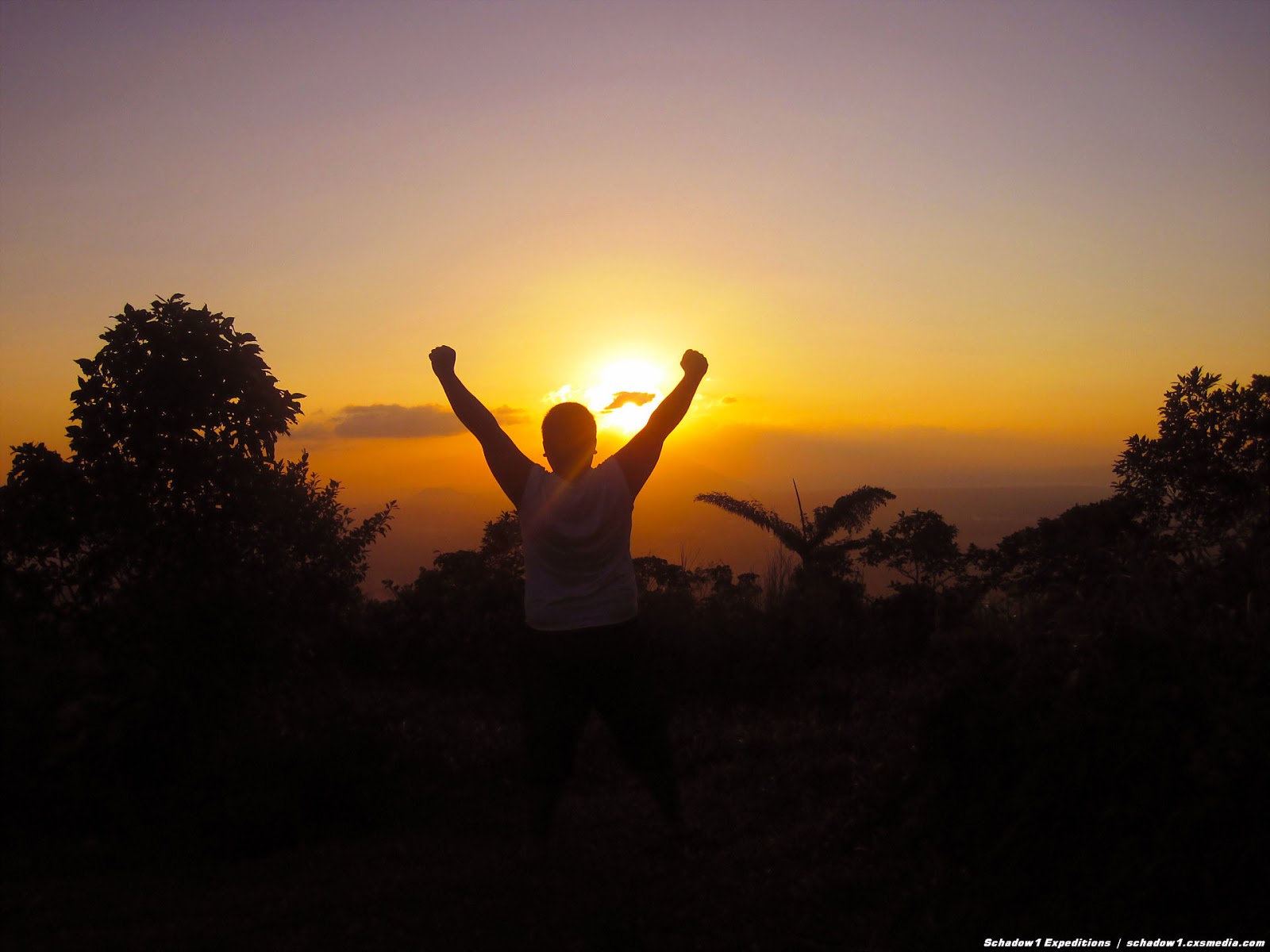 By dusk, I met this group of mountaineers who call themselves Itama Mountaineers. They are one jolly group so my partner and I haven't felt "lonely" during our stay.


Then we were also lit by the full moon and was mesmerized to take a photo of the sky.

At 730AM we proceeded with our descent to Mang Pirying's hut. We met Mang Tino, Pirying's brother. This hut has restrooms as well.


He is offering a free cup of Alamid coffee and even told us how they were made: from Civet droppings. And so I met this Civet which helps Mang Tino earn P100 per pack of this ground alamid coffee.


After a few minutes of talk with Mang Tino, we then descended to the hut between Stations 3 and 4 where we met Mang Berting and his family. Again, they are offering us a free cup of coffee but I preferred the buko (coconut juice) he is selling for P10/each


Due to my insistence to traverse to Malipunyo from Manabu, it is through Mang Berting's help that I met Kuya Barok who then guided me halfway to the trail to Malipunyo.

The traverse trail starts just right before the camp site, right  after Mang Pirying's hut, so we need to assault back up again.

We started our trail back up at around 9:42AM and arrived at the Malipunyo trail intersection at around 3:13PM

The Malipunyo-Manabu Trail is long and densely forested and is furiously populated by Teka-Teka. It is advised that when covering this trail, you must be fully covered because that is the mistake we had so we are full of whip-like wounds after the trek. Also, the trail can easily be covered with foliage so the trail can easily vanish.


It was a mission accomplished in tracing this new trail.

After trekking through the Malipunyo-Manabu trail, we plan to climb Malipunyo, yet, we have almost gave up in climbing it as we were already out of water. And so, we went down along the Malipunyo trail and hoped to get water from elsewhere so we can then continue to climb this giant.

2 kilometers before the Malipunyo jump-off, we fortunately saw this store that re-supplied us. It was getting dark and Malipunyo trail is not advised for a night trek due to dangerous ravines so we decided to camp out instead, but the owner of the store generously offered a room for us to stay for the night. We also found out that Mario, one of the known registered guides for both Malipunyo and Manabu, lives nearby and happened to be the store owner's godson. And so we met Mario that night as well.

It was almost passed our 2nd day and was worried that the people from Manabu jump-off is looking for us so I asked Mario to SMS the officials there as I don't know the number. After which we ended our 2nd Day

We woke up at 4AM, prepared and hurried off at 4:45AM to climb Mt. Malipunyo. This mountain is also densely forested with fewer Teka-Teka. However, the setback here is the very steep ravine and wet soil especially when you reach the point where I call as the "Burj Point"

The Burj Point is a point in Malipunyo trail that is as high as the highest man-made structure built as of the time of this writing.

The standard Malipunyo trail will allow you to set foot on its 3 peaks. There is a shortcut to bypass one of the peaks but you need to prepare for an 80-degree assault.

We climbed Malipunyo using the standard trail. The 1st peak can be used as a campsite for about 5 tents. There is a clearing before the 1st peak via the standard trail which is a bit spooky for my partner as it is dark, with bats and mountain boots left there strangely. When I met Mario a second time, this time at Malipunyo's summit, he said it was there since 2009.

At 10:25 AM, we reached Malipunyo's summit and had my personal record reaching 1005MASL) as of the time of this writing.

There are 2 viewpoints at the summit. One facing east and the other on the west. East will let you see Mt. Maculot and West will show you Mt. Banahaw (the first mountain I climbed when I was only 8 years old). Face north, and you'll see Manabu and the rest of the Malarayat Mountain Range including Makiling at far north.

Mt. Manabu and Mt. Malipunyo is the 6th and 7th mountain I have climbed.

We proceeded with our descent at 12:30PM and used the never been plotted 80-degree trail and arrived back at Manabu jump-off at 5:32PM

A few kilometers from Manabu jump-off, my partner and I were surprised to see that local officials are already looking for us because our vehicle is parked there since dawn of Friday. And it is already Sunday night. We learned that Kuya Mario's SMS did not reach them. We would like to apologize for having them worry but would like to commend them for looking over our welfare. For the officials I met, we do like to thank you!


The data gathered in this Malepunyo Mountain Range climb has been contributed to the +OpenStreetMap Philippines  project for free use of mountaineers who plan to climb this mountain with GPS assistance.