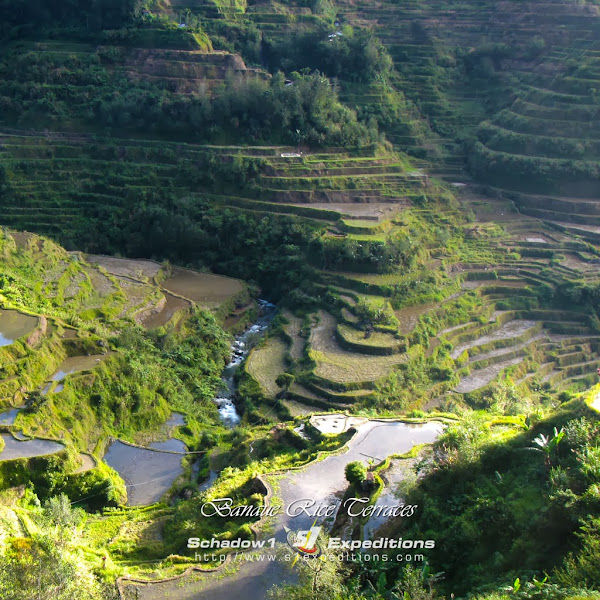 Part 2 of the Cordillera Series

It is a dream come true. One of the surreal places in the Philippines to be at. Imagine square kilometers of mountains and valley converted by hand by Philippine ancestors to supply the tribe with their staple food even if they live at 1300 meters above sea level. A time when tools and heavy equipment is not yet available yet over the centuries, the functional agricultural masterpiece also became a work of art that the world admires. I have personally been here to fulfill a childhood dream of stepping on and seeing for myself the acclaimed National Culture Treasure of the Ifugao Rice Terraces. I was speechless as I first had a glimpse of it. I got down from our guide's transport and for the first time, I bore witness the Banaue Rice Terraces!


It was sunrise of the second day of January of the year 2014. Coming from an 8-hour bus ride from Manila on new year's day. I woke up the next morning and saw for myself that I have already set my foot on Banaue, Ifugao.

From the town center and the Municipal Tourism Center, we boarded off the bus and Salvador Nahyahan was the first local to approach me and offered his heavy duty tricycle to transport us to various tourist spots in Banaue.

First we need to register at the tourism center and pay Php 20 of environmental fee before we can head on and enjoy the town. It was before sunrise coming from a 24-hour "fasting" after the New Year's eve Meja Noche, we just had to eat breakfast for the day before we head on. Our guide brought us to Banaue Halfway Lodge and Restaurant for a hearty breakfast.

It was a cold 12 degrees Celsius morning. One of the coldest temperatures in the Philippines and I have to take a sip of this warm coffee overlooking the town center. I already am starting to see rice terraces but not much developed as I see it on elementary text books. I am sure that I am already nearby. 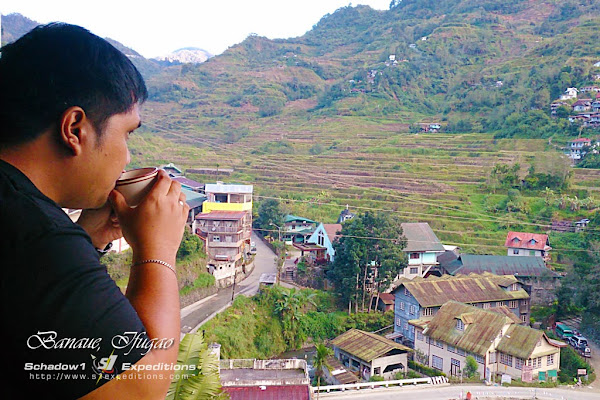 After the breakfast, Salvador has introduced me to various locations in Banaue and If I am interested to check them out as well. I was in a tight 6-day itinerary for mapping three provinces and checking out other places like Batad, Mayoyao, Kiangan, Hapao, and Mt. Amuyao may need to come in later part of the year. It was the Banaue Rice Terraces that had me on my checklist so I am skipping it for the time-being.

The transport and guide fee to check out the Banaue Rice Terraces is Php 200, and so we made a deal and headed on.

And it was 7:55AM at 1,196 meters above sea level exactly at coordinates 16.92936N 121.05519E. It is the pyramid-shape rice terraces that is imprinted at the back of the Php 20 bill where I first saw and experienced the Banaue Rice Terraces!

Over a kilometer more from this viewpoint is another familiar view of the Banaue Rice Terraces imprinted at the back of the older Php 1000 bill.

At this viewpoint  at 1300 meters above sea level exactly at coordinates 16.93187N 121.05495E is the first time I ever set foot at Banaue Rice Terraces and to where I got the dream of being in unison with nature and my forefathers' culture came true. 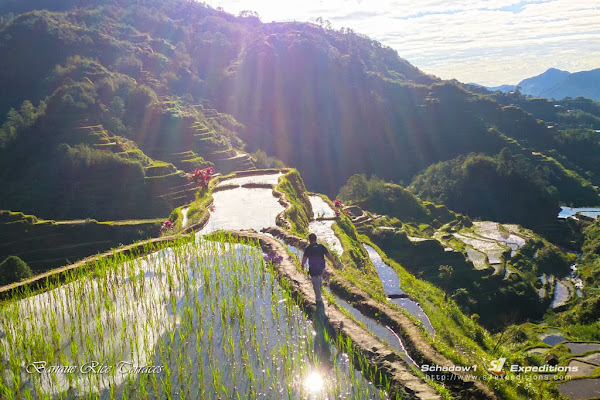 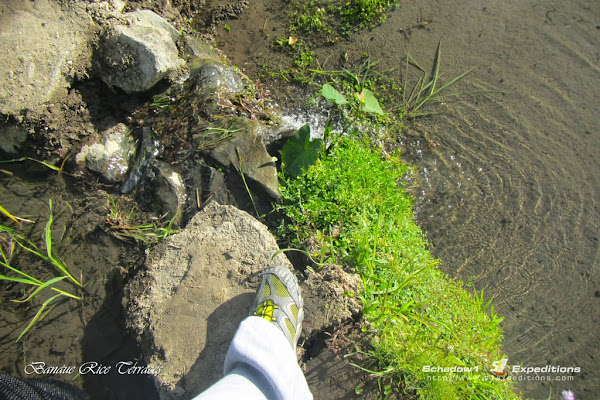 The next stop is only about 200 meters away from the Php 1000 viewpoint is the one they call as the Dayanarra viewpoint named after the Ms. Universe 1993 which is a perfect viewpoint having a parallel view with the river valley below what follows the whole length of the Banaue Rice Terraces. From here we met a Wigan (a male elder of the Igorot) who is willing to take pictures with you. Just don't forget to drop of a small donation in his box nearby.

A kilometer away from the Dayanarra viewpoint is the main or the Engineer's viewpoint of the Banaue Rice Terraces to which most of the pictures from our textbooks in elementary about Banaue has been taken. 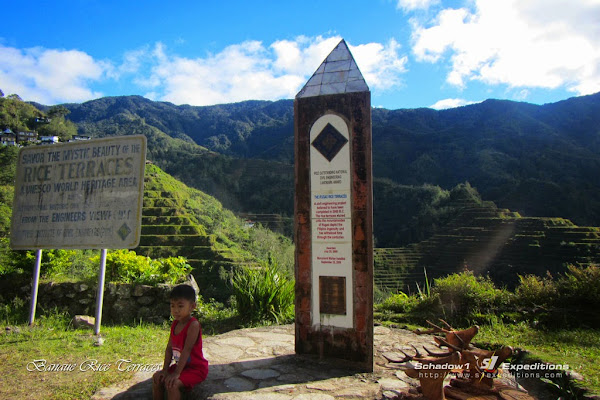 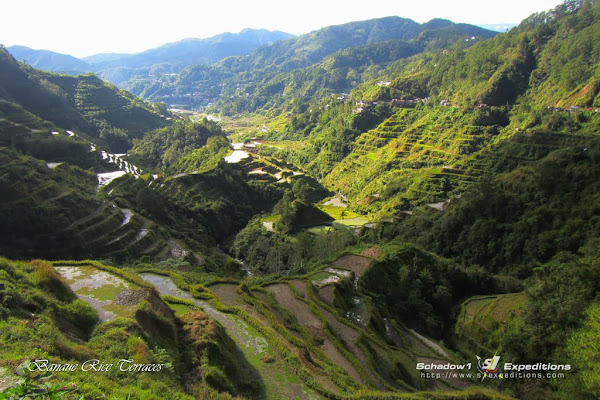 The main viewpoint compound also has a souvenir store which shows the arts and crafts of the Banaue Igorots to which they excel primarily in sculpture.

We were there at a season where they are just starting to plant rice. According the locals, the best time to go there is summer, around April to June when the rice are about to be harvested and the color of the terraces are golden. The rice terraces are maintained to be free from genetically engineered rice.

Virtually, there are no wastage in cropping rice as water from streams above the mountains naturally irrigate the crops in a per level basis and every excess flows down the river valley between the terraces. The crop remains after harvesting the rice are left above the soil and becomes the natural fertilizer for the next planting season. The produce of the Banaue Rice Terraces remains purely organic. You get the visual satisfaction from the view and you also get a fresh produce from the rice terraces itself!

10PM Daily trips from Ohayami Bus Lines at Lacson corner Fajardo street in Sampaloc, Manila goes to Banaue and drops off passengers to the Tourism Center of Banaue. From there, tricycle rides are available to offer you transportation to various tourist location in Banaue. (coordinates 14.60725N 120.99476E)

Accommodations via hostels are available all throughout the main Banaue town.

For more information, you may contact our guide and driver, Salvador Nahyahan on his mobile +63 (935) 7729171. Sometimes he may not be able to answer immediately because aside from driving his tricycle, he also guides mountaineers at Mount Amuyao. 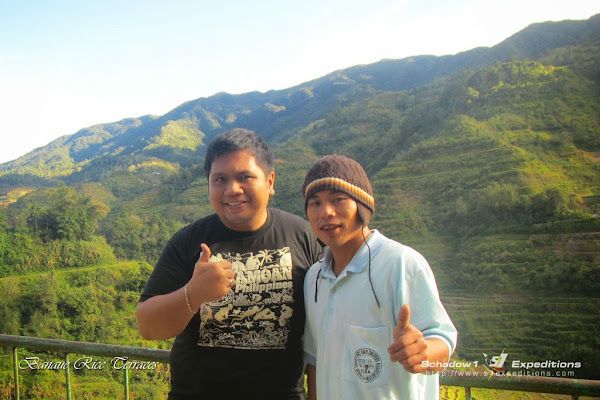 Banaue has been intensively mapped by Schadow1 Expeditions as part of our mapping advocacy to promote Philippine tourism and help local government units using the mapping data for their disaster risk resiliency planning.

Data has been contributed to +OpenStreetMap Philippines  and a routable GPS map of the whole country is being compiled weekly to aid drivers and outdoor recreationists on their navigation/trek within the Philippines.


For a more detailed account of Schadow1 Expeditions on its Cordillera Mapping Expedition, check on the links below: