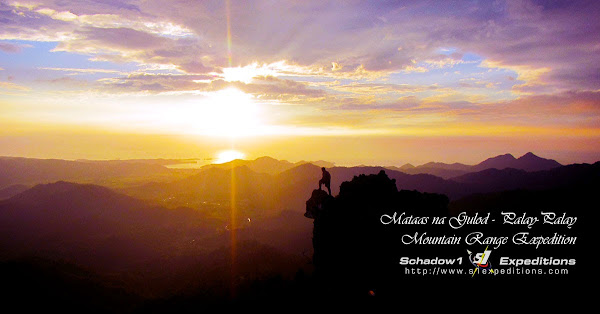 One of the nearest jungles in the Philippine capital is the Mataas na Gulod - Palay-Palay Mountain Range that is being occupied by two provinces: Cavite and Batangas. Famous mountains in this range are Mt. Marami and Pico De Loro. Never before mapped and has only been traversed by handfuls few in the past year, Schadow1 Expeditions has explored this jungle by traversing across the mountain range passing through five mountains and crossing several rivers. This article is a journal of our mapping expedition to Cavite's jungle.

Armed with a GPS and a Triple Sensor watch, we started our trek at 9:15AM initially with two buddies who heeded my call for a climbing company on this expedition, Roger Cabacang and Norie Fe. Gradually pacing from the Barangay Ramirez, Magallanes jump-off passing through Maragondon river that bounds Magallanes and Maragondon separately. This is the Nuestra Senora trail named after its chapel end-point at the valley on Mataas na Gulod. This chapel is the junction that separates the old trail and the new trail to Mt. Marami. Going to the back of the chapel crossing the river is the old trail and was the trail that we took on our first attempt to scale Mount Marami August of last year but failed to do so due to a looming Typhoon Maring (intl. Trami). See Chased by a Lightning - Conquering Mt. Marami.

Continuing to go West connected to the Talipusngo Trail is the new trail which is more straightforward than the old trail and ends at the junction to the Marami-Pico De Loro traverse trail (continuing north) and the trail to Mt. Marami (heading west from the junction).


This expedition is a revenge to the failed attempt to reach Marami's summit last year and at the same time, to map the whole mountain range by traversing Mt. Marami to Pico De Loro.

It was a sweet revenge by giving us an ample window right at sunset when the cloud cleared for us as we reached Mt. Marami's summit boulders. 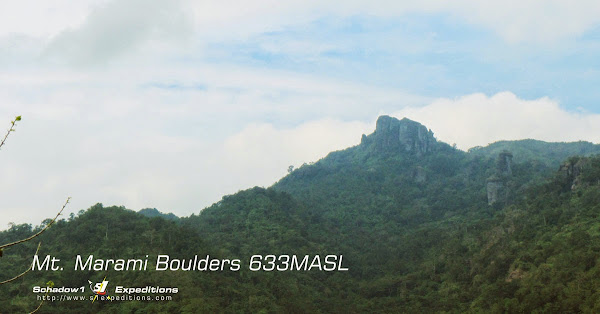 At night time, we have pitched our tent at Mang Juan's abode along the trail to Pico De Loro from Mt. Marami. Their house is only 165 meters away from the Marami Summit Trail and Traverse trail intersection. 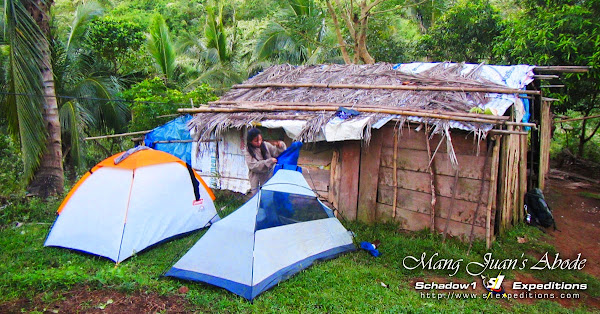 The next morning at 8:45AM, we proceeded with our exploration inward the Mataas na Gulod - Palay-Palay Mountain range and reach Pico De Loro from Mt. Marami. On this trail, Gerry Rementilla and Ty Maranon has joined us in the trails. Gerry and his group are the first known non-local mountaineers to have traversed Marami to Pico De Loro last March 2014. I am actually full of luck as it happened that all my companions have already traversed this mountain range before, making them familiar to the trails. It seems Roger awesomely remembers most of the path even if most of the trails are already covered in foliage and it was only his 2nd time to traverse.

The trail to Pico De Loro coming from Mount Marami goes around primarily at the north eastern contour of Mataas na Gulod. The initial path are primarily grasslands with wild cows roaming the path. As you reach the back of Mataas na Gulod, which is its northwestern flank, the descent starts on thick foliage usually of thorny wild flowers and gets more forested as you descend to 230MASL. The first possible campsite at this area is the Alon-Alon camp grounds (coordinates 14.21288, 120.68607) which looks similar to the camp site of Mt. Cristobal in Quezon. A nearby Niyugan Waterfalls (coordinates 14.2126, 120.6863)  makes this area suitable campground before you pursue on the long trek across the range.

As you reach the valley between Mataas na Gulod and Mt. Palay-Palay, you go deeper to a more forested area and the marks along the trails you see are of wild cows while human foot marks are not to be seen except for ours. Before you ascend to the next valley between Dos Picos and Palay-Palay you would have to do a 750-meter trek along Anino River  (coordinates 14.20912, 120.67528). Both sides of the river bank are already highly forested and inclined at about 80 degrees making this river the only way to reach the next valley. This makes the trek across the mountain range very dangerous on rainy season as the Anino River can swell at a fast rate when raining as the water gushing down from two mountains are passing through this river. The Anino River starts at Anino Campsite and terminates at Maragondon River.

After surviving the river trek, the next would be to ascend Dos Picos' northeastern flank. Dos Picos bounds Cavite at north and Batangas at south. As you ascend, you will reach a semi-cleared area suitable for camping, the Anino Campsite (coordinates 14.20794, 120.67183). According to Gerry during their first traverse to this trail, the path north of Anino camp is where illegal loggers denude the Cavite portion of Dos Picos.

Continuing with the western-facing smaller trail beside the illegal loggers' trail would get you ascending to Dos Picos' Balite Junction (coordinates 14.21311, 120.66893) . A semi-grassland filled with wild cows. Be careful on the possibility of a cow stampede as it almost happened when we passed by the area. From here we descend Dos Picos towards the river where the water to the Pico De Loro Waterfalls is flowing. The path from Balite Junction to the river is highly forested and the trail is almost invisible; where I got lost momentarily when I was left behind a couple of hundred meters away.

When you have already crossed two rivers after descending Dos Picos, you will only be 500 meters away from the Alibangbang Park junction of the Pico De Loro trail and heavy forest turns to a beautiful grassland. About 100 meters before Alibangbang is the Walk of Fame Park (coordinates 14.21403, 120.65949) . A very large campground which according to Ty Maranon, was once the campsite for Pico De Loro when the saddle camp near its summit was not yet used as a camp ground. The park is once the center of the crater of an ancient mega volcano of the Palay-Palay - Mataas na Gulod range which was active during Holocene, about 1.3 million years ago.


We have reached Alibangbang Park from Mt. Marami at 3:09PM making the trek less than 7 hours for a slower pace hiking.

The trail from Mt. Marami Ramirez jump-off to Alibangbang Park and to Pico De Loro jump-off at Ternate, Cavite is about 26.2 kilometers long passing through diverse terrain, flora, and fauna of the Cavite's mountainous jungle. Take note that cellphone signal is not available all throughout the traverse as the trail is in between 5 mountains and is uninhabited.

The mapping expedition to the Mataas na Gulod Palay-Palay Mountain Range has obtained a wealth of data to this never been mapped area of the Cavite-Batangas jungle. Data has been contributed to Openstreetmap Philippines, to which the data can be used for various purposes such as humanitarian, disaster resiliency planning, tourism and navigation. While our blog compiles the mapping data to GPS-assisted navigation devices for navigation assistance and adventure guidance. The frequently updated GPS map of the Philippines can be downloaded for free at our #mapPHL page. 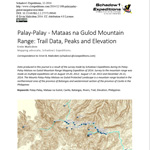 Abstract
Data produced in this journal is a result of the survey made by Schadow1 Expeditions during its Palay-Palay Mataas na Gulod Mountain Range Mapping Expedition of 2014. Survey to the mountain range was made on multiple expeditions set on August 19-20, 2012;  August 17-18. 2013 and December 20-21, 2014. The Mounts Palay-Palay Mataas na Gulod Protected Landscape is a mountain range located in the northernmost area of the province of Batangas and westernmost section of the province of Cavite in the Philippines.
DOI: 10.13140/RG.2.2.27573.99040
Pages: 5
Publication: 12-2014
Download