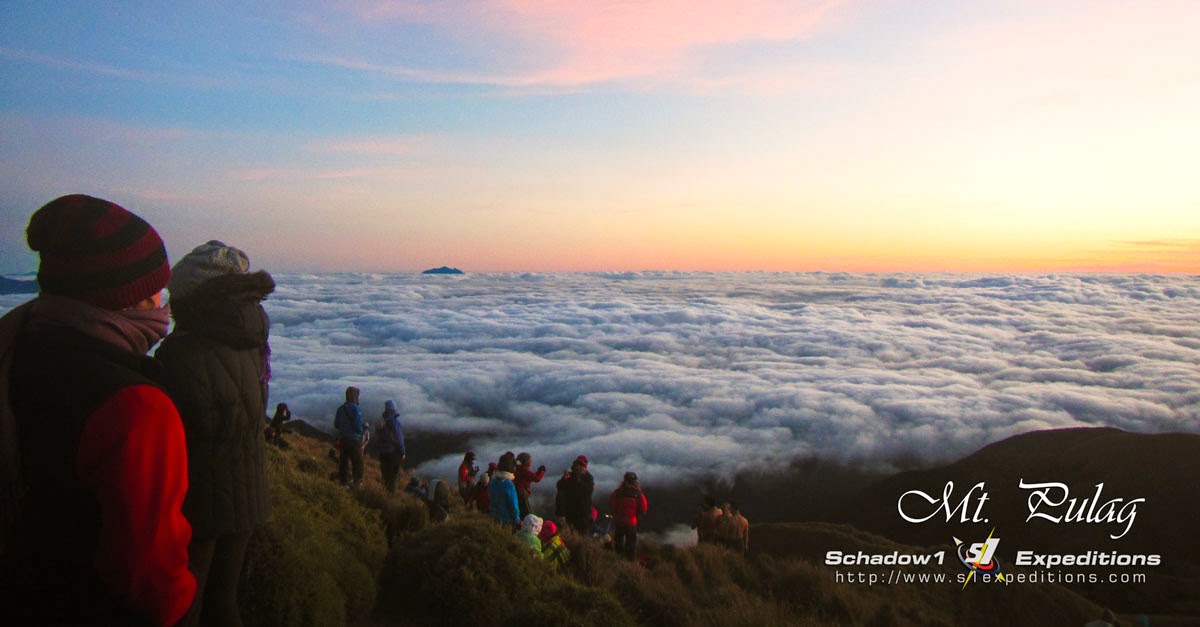 December 27-30, 2014
As a child, we seldom get the dream of sleeping on a puff of cloud among the moon and the stars at night. As we attain that dream and make it to reality, we scale and map the highest peak of the island of Luzon and the Philippines' third highest peak. Towering over the other mountains of the country's largest island and overseeing its whole landmass. Mt. Pulag makes all of this childhood dream come true. Standing over at 2,926 meters above sea level, the view is breathtaking and the memory shall remain as long as we live.

Getting to Pulag is expensive as it requires a big truck-sized jeepney to get you to the rugged and highly inclined terrain to Pulag's Ambangeg jump-off at Bokod or via Pulag's difficult Akiki trail at Kabayan, Benguet. At such an expense, it would be better off to go together in groups to share the cost with the transportation. As early as the first week of December, we have seen an invite post in Facebook by Dohnny Bacongallo as he gets people to share cost on an Ambangeg-Ambangeg trail climb to Pulag's summit. It was an undeniably great invite matched with a year-end timing that would surely be a great way to place in memories as 2014 makes its conclusion.

In a turn of events, it happened to be that it was a group climb event of Hamog Mountaineers of Las Pinas where they were getting more participants to share the cost and make it less expensive per pax. Who knew it was just a mountaineering group from the same city where I grew up where I'll meet these people who enjoy nature and adventure the same as I do.

Coming off from a mapping expedition and vacation at Talisay, Batangas, we headed directly to Pasay to catch a bus headed to Baguio on the night of the 27th. We reached Baguio at the early morning of the 28th and rode a heavy-duty jeepney en route directly to Bokod, Benguet towards the Babadak jump-off of Pulag.

At 9:30AM we reached the DENR-Protected Area Office station (coordinates 16.52077N 120.83389E) for a short briefing regarding etiquettes on Mt. Pulag, safety and a short study about the fauna that thrives in the mountain.

As the lunch time approached faster than we expected, we have made our stop at Gina Epe's carinderia (coordinates 16.53164N 120.84187E). A noticeable establishment midway between the DENR-PAO and the Babadak jump-off. She happens to coordinate with jeepney transportation to and from Baguio to Bokod or Kabayan Benguet.

There are several established trails to Mt. Pulag. The most famous and easiest would be via the Ambangeg trail to which the jump-off is at the Babadak Ranger station (coordinates 6.57209N 120.88025E). The trail is straight-forward as you start trekking at 2458MASL. Other trails include the difficult trail that starts at Kabayan, Benguet at 1230MASL (coordinates 16.6101N 120.8403E) and continuous assault makes it more challenging but offers a picturesque view of Halsema Highway from afar and a field of pine trees to a view that is similar to a cigarette commercial. This is the Akiki Trail.

Other not so common trails are the Tawangan and Tinoc Trails (coordinates 16.65564N 120.91085E) that passes through the northern ridge of Pulag over its mossy forests. Although it is colder to climb through this trail, they also call this trail as the bloody trail due to the existence of blood leeches called Limatik which is similar to those that are present in Mt. Makiling.

As for this expedition, we took the easier route, which is the Ambangeg Trail and left the Babadak Ranger station jump-off at 2:30PM and reached Camp 2 right after sunset at 6:00PM where we stayed over the night. Camp 2 is already at about 2730MASL and the temperature is already at a damp 9.4 degrees Celsius when we reached it. Last time I checked before we had our lights out at 10PM, it has already dropped to 6 degrees Celsius and the cold is already a bit unbearable for me who is accustomed to temperatures above 20 degrees. It was just a blessing that it was a windless and cloudless night or else the chill would have even reached our spine.

By dawn, temperatures may have reached below zero degrees centigrade due to the frost we see along the trails as we get to the summit. 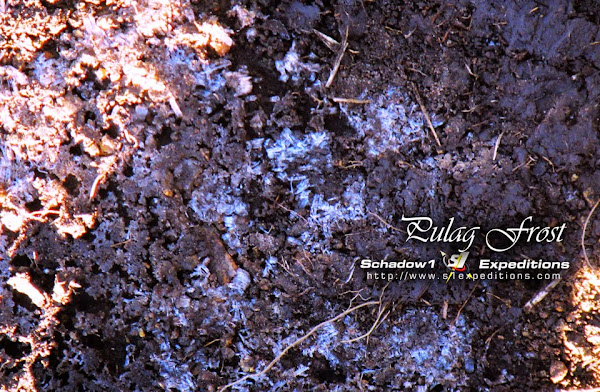 Water sources are available just right after Camp 1 and right before the ascent to Camp 2 (coordinates 16.58404N 120.90730E). Each campsite has toilets established.

As for us, we stayed at what is so-called Camp 2 extension which is a hundred meters above Camp 2 and is right by the foot of Pulag's peak 3 where a communication tower has been built.

As it was discussed at the DENR station that a rat exists in Pulag that was once thought to be extinct and is a very rare sighting. It may have been a lucky hike for me this day as I come to cross with this rat's path when I was hiking alone before I reached Camp 2 by the Vegetation area of Pulag's Ambangeg trail. The Short-footed Luzon Tree Rat, commonly known as dwarf cloud rat was first discovered at the year 1898 and is believed to be extinct but hopes resurfaced when American and Filipino researchers were able to capture one way back 2008 and has remained to be elusive to sighting over the years, not until I came across it hunting for earthworms for its meal. 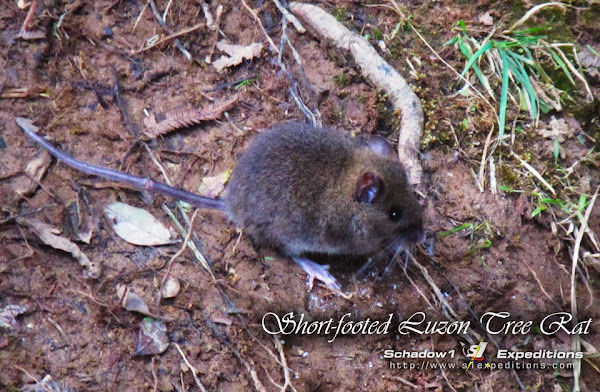 Sea of Clouds at Pulag's Summit and Measured Elevation 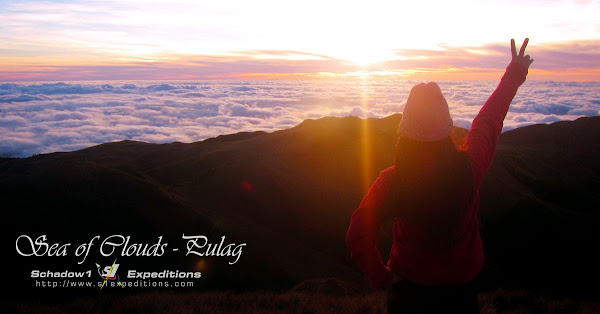 The summit of Mt. Pulag is situated about 2922 meters above sea level. Instruments I brought give the summit at a closed 2929MASL from my GPS device while my watch that calculates elevation through air pressure shows it at 2923MASL on a calibrated air pressure of 711hPa. Using averaging, the actual height of Pulag is 2,926 MASL from our mapping expedition.

We have left Camp 2 at around 4:08AM and reached the summit just before sunrise at 5:30AM, All conditions are favorable for a sea of cloud sighting as a low-pressure area has been sucking air at Negros Occidental (TS Jangmi loc Seniang) giving a push of the amihan or north-eastern winds from the north while the Cordillera mountains including Pulag is blocking its path, therefore, compounding the clouds at its north-northwest quadrant giving a magnificent view of "sea of clouds". For a detailed explanation on what conditions make it favorable for a sea of clouds, we have prepared this article, Predict the Natural Occurrence of Sea of Clouds on Philippine Mountains.

The summit of Mt. Pulag is the vertex of the boundary between three provinces in Luzon which bounds Benguet, Nueva Vizcaya, and Ifugao. Benguet occupies the south to the east quadrant of Pulag, Ifugao occupies its north quadrant while Nueva Vizcaya occupies its southwest to northwest quadrant.


The Mt. Pulag Mapping expedition is a part of our 2014 year-end mapping expedition which covered four provinces including Talisay Batangas, Benguet along the Ambuklao Road via Baguio-Nueva Vizcaya road, Calasiao and Bolinao Pangasinan, and Sta. Ignacia and Camiling Tarlac.

Mapping data has been contributed to OpenStreetMap Philippines with a goal to provide the recently updated and street-level precise map of the Philippines for the purpose of improving tourism, outdoor recreation, navigation, and disaster resiliency planning for the country. Our blog also regularly compiles the said mapping data to GPS-assisted navigation compatible maps which can be used by drivers and outdoor adventurers on their travels. The GPS map is available for free download on our #mapPHL page. 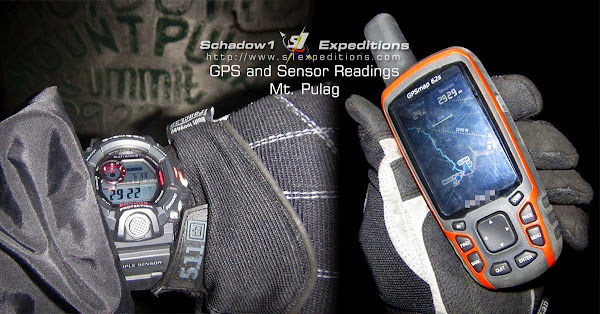