Predict the Natural Occurrence of Sea of Clouds on Philippine Mountains 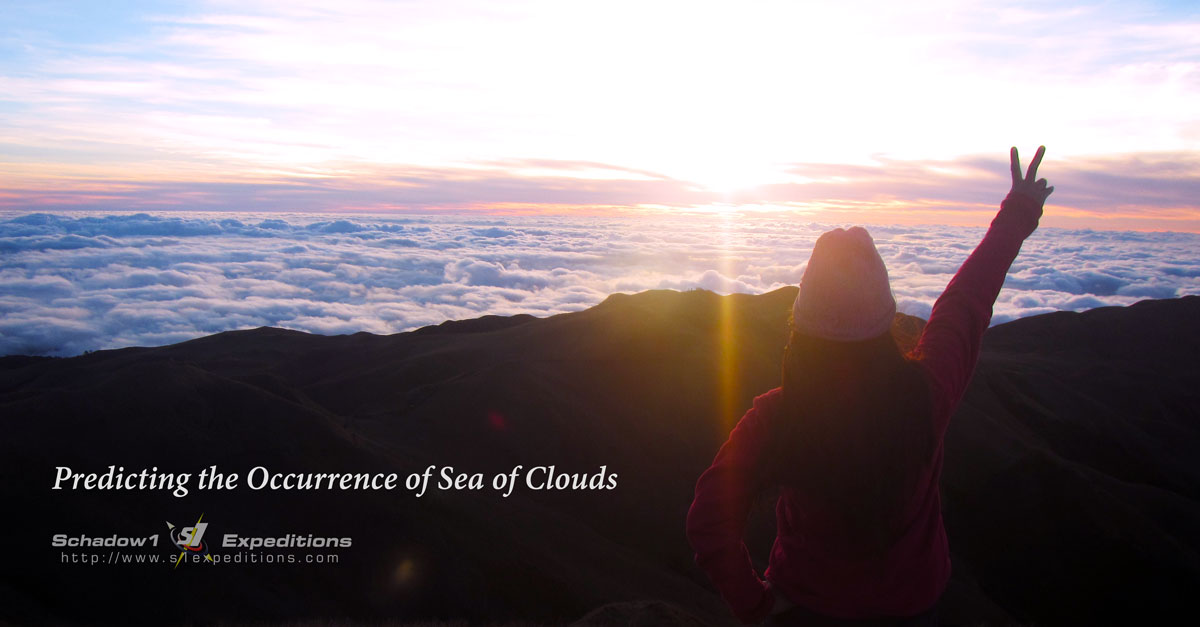 Mount Pulag is known for the magnificent view of sea of clouds when at its summit. Being the tallest mountain at the island of Luzon in the Philippines, no other mountains can hinder its magnificent view. However, not all are lucky to catch the sea of clouds. So when do we usually get this sea of clouds so that we get to have a glimpse of the wondrous view while on top of these towering mountains?

To be able to predict sea of clouds view atop a mountain's summit we have to be aware of the (1) cloud properties, (2) the elevation of the mountain's peak, and (3) the weather. All of these go hand-in-hand to produce a magnificent view of clouds below our peripheral view.

There are 3 low-lying cloud types that make up the sea of clouds we see below when on top of a high mountain. These are cumulonimbus, nimbostratus, and nimbus clouds.

Nimbus clouds or commonly known as the rain clouds are the lowest-lying cloud type which typically bring rains. However this cloud formation is grayish and is usually heavy with water molecules that they appear grayish below. And because these are rain clouds, you would be expecting that you would not be seeing any sea of clouds at all because the surrounding view is all grey.

Nimbostratus clouds or commonly known as the fog clouds float below 2000 meters above sea level and usually these are flat grayish clouds. Although these clouds do contribute to the view of sea of clouds, these clouds are usually flat which covers foliage on mountain contours. These clouds are predictable to be seen during early morning right after drizzle or a heavy rain before the sun has risen.

Cumulonimbus clouds are fluffy low altitude clouds, usually grayish at its under-side and cotton-white at its top as it floats at about 2000 to 6500 meters above sea-level. It is usually formed when hot air collides with cold air at low altitude or if mountain ranges of a similar elevation blocks its way thus accumulating them in one side of the mountain range. With its characteristic, this is the best cloud formation for a "sea of clouds" sighting.

Now that we know the floating altitude of the three low-laying clouds, we now know that the best mountains to get a magnificent sea of clouds sighting would be unobstructed mountains at above 2500 meters above sea level. Although mountains not lower than 1600 meters above sea level (but not more than 2100MASL) can also give a view of sea of clouds, the only cloud formation that contributes to it is at this altitude are nimbostratus clouds which looks like a layer of silk from below.

As clouds are formed depending on the weather, the most common and easiest cloud formation to predict its occurrence would be the nimbostratus clouds which usually shows up on a fair weather condition right after a night of drizzle and rain. But as such, these cloud types can only be shortly predicted which usually is very hard to use as a basis in planning your mountain trek for a sea of clouds sighting as the prediction window is only a few hours before the intended viewing time.

Cumulonimbus clouds on the other hand usually can be predicted within a 3-day window as it forms on mountain ranges even on a fair weather as long as the wind flow direction is given in contrary to the mountain range location. In the Philippines, wind-flow is very predictable as its general direction is constant depending on the season. Amihan coming from the northeast which is prevalent on months of December to May; and Habagat coming from the southwest which is prevalent on  months of June to November.

Pulag is right in the middle of the Cordillera mountains which serves as the catalyst of trade winds. As it blocks Amihan coming from the northeast, cumulonimbus clouds accumulates at its northeastern quadrant, especially on a sunrise. When a low pressure area or a typhoon on a favorable distance (not too close for its rain to affect Pulag) right by its south pulls in more trade winds from the Amihan, this makes the cloud accumulation at its northeastern side to be more dramatic. On months of December to January, most LPA/typhoon path is usually directed at Visayas and the Mindanao; which results to the intensification of the amihan on a greater level for the mountains in the Cordilleras.

But for Pulag, would Habagat (southwest trade winds) have the same effect? The answer is, it should but not quite. Typhoons in Luzon are prevalent on Habagat months of June to November which makes climbing dangerous, and an impossible view for sea of clouds when a typhoon is near right where Pulag is.

Luzon mountains
Part of the Cordillera where the mountain is no less than 2500MASL on the months of December to January. Even more dramatic when a low pressure area is at the vicinity of Visayas or Mindanao; to which it intensifies the Amihan to produce a more massive sea of clouds.

Visayas mountains
Mt. Kanlaon on the months of May to June.

Mindanao Mountains
No less than 2400MASL on the months of October to November when the Habagat is intensified by a low pressure area at the vicinity of Luzon.