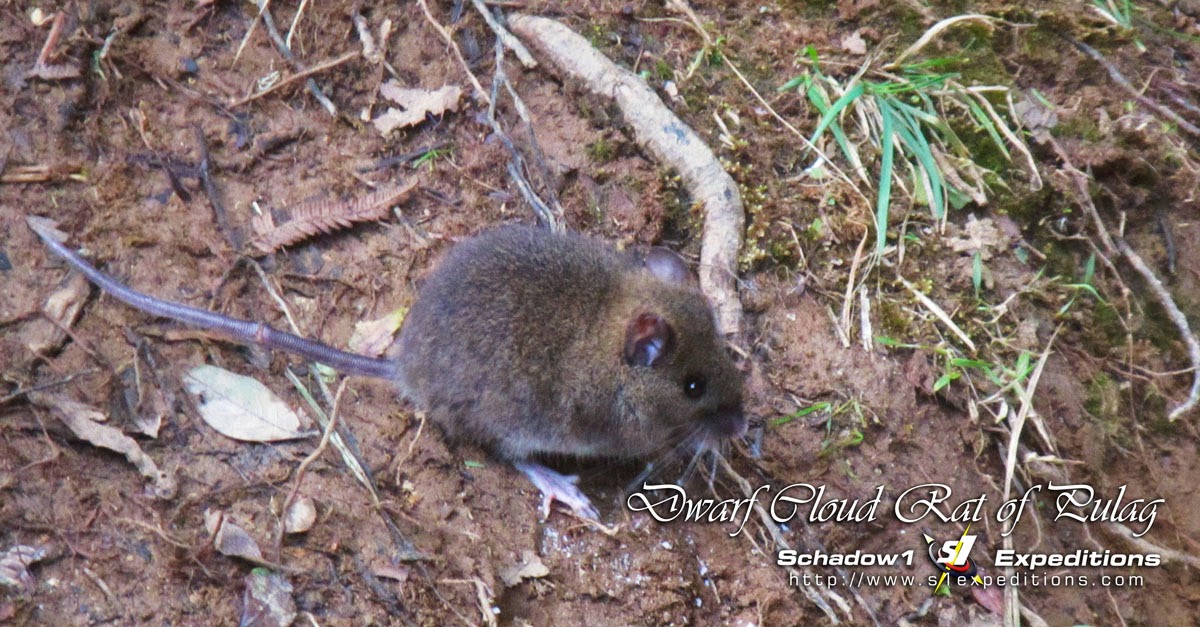 First discovered at the end of the 19th century, the Dwarf Cloud Rat only exists in the mountains of the Cordilleras exceeding 2,300 meters above sea level. Believed to be already extinct by the 20th century, hopes have been renewed as researchers have re-discovered the species last 2008.

Schadow1 Expeditions was lucky enough when we have mapped Mt. Pulag and came across the rat along the trail as the sighting of this cloud rat is very rare and the opportunity of taking a picture of it is very uncommon.

It was about sunset at around 5:18PM of December 28, 2014 on the way to Camp 2 of Pulag's Ambangeg trail when I saw this rat seeking for food along the muddy trail of the slightly mossy forested area of Mt. Pulag at 2,620 meters above sea level.

At first, taking a picture of it seemed to be hard as it had been running along the side of the trail searching for food until it stopped and one point giving me an opportunity to take a couple of pictures and a video until it sped off. It was searching for earthworms and chewing it as it walked along.

The creature is about an adult-hand size (around 8 centimeters in length excluding the tail) with its tail more than 1.5 times the length of its body. It has short feet hopping like a kangaroo instead of walking with small ears and big eyes. It has a reddish brown fur and a dark snout.

The Mt. Pulag Mapping expedition is a part of our 2014 year-end mapping expedition which covered four provinces including Talisay Batangas, Benguet along the Ambuklao Road via Baguio-Nueva Vizcaya road, Calasiao and Bolinao Pangasinan, and Sta. Ignacia and Camiling Tarlac.

Mapping data has been contributed to Openstreetmap Philippines with a goal to provide the recently updated and street-level precise map of the Philippines for the purpose of improving tourism, outdoor recreation, navigation, and disaster resiliency planning for the country. Our blog also regularly compiles the said mapping data to GPS-assisted navigation compatible maps which can be used by drivers and outdoor adventurers on their travels. The GPS map is available for free download at our #mapPHL page.