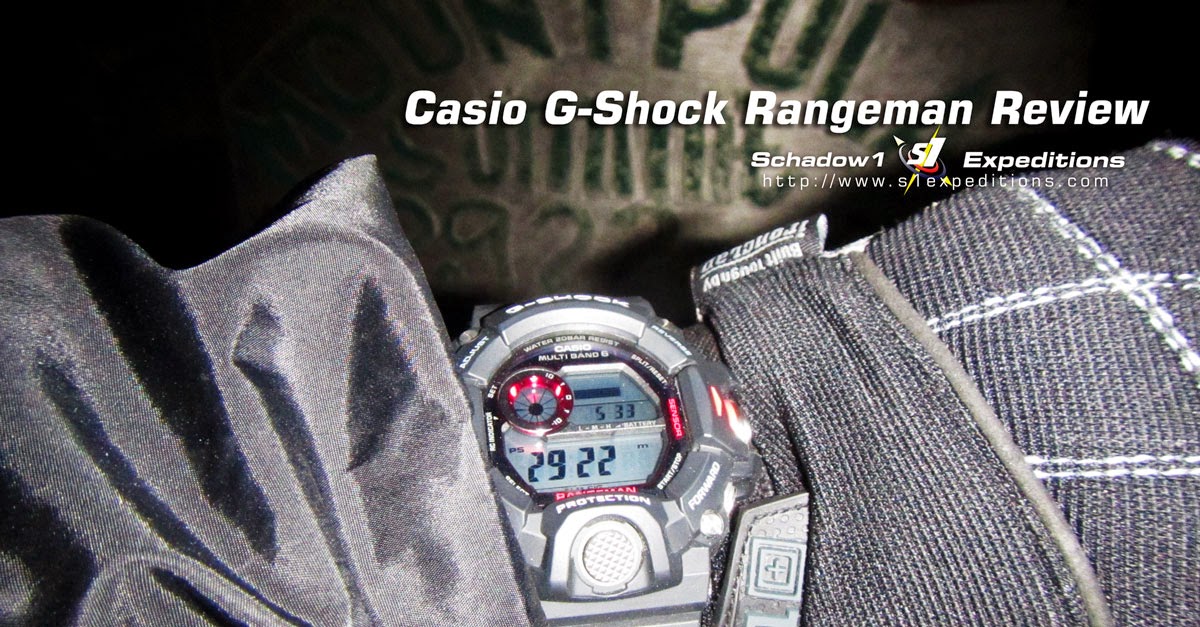 Since 1990's the Casio G-Shock series has been a watch of my choice. By its name these watches are expected to be durable by being shock-resistant, water resistant to 20BARs (200,000 hPa) or 200 times the normal atmospheric pressure at the earth's surface or approximately 200 meters below sea. In this article, we test the capability of Casio G-Shock's new creation, the Rangeman which is built for hikers and mountaineers.

The Rangeman is a shock-resistant, water-resistant, mud-resistant watch built for trekkers, hikers and mountaineers. It is solar powered that charges and powers the watch during daytime while a capacitor powers the watch in the absence of sun light. It has a triple sensor: barometer, thermometer, and compass. It is radio-controlled, where its time is continuously synchronized to the atomic clock where signal is available giving its time forever accurate.

The release of this watch is highly anticipated as the predecessor of a G-Shock watch with triple sensor was seventeen years ago and is only battery-powered.

Although watches with triple sensor built by Casio has been around even before the Rangeman release, they are not of the G-Shock family and shock resistance is not part of the priority of its design (Pro-Trek series)

Below is a detailed functionality review of the G-Shock Rangeman.

Shock Resistance
G-Shocks have been known to have a nearly indestructible casing. As this brand has been developed way back in the 80's and indestructibility was its foremost quality consideration when it was developed, no brands as of this time can claim as much as indestructible as this watch. I have several G-Shocks that died after 8 years and their death was due to its main board wear or destruction due to battery leak. But never had I have a failing G-shock due to bumps. I had several motorcycle accidents in the past and my past G-Shock models had wild scratches on its casing but it still functions without any issues. I believe this Rangeman being part of the G-Shock family lives by its name. 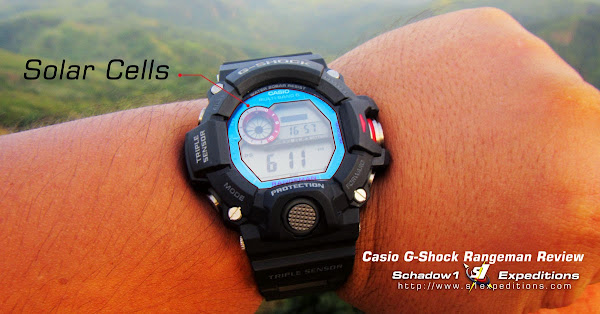 Does not require battery change. No more of that battery leak issues I have in the past. It stores power through a leak proof capacitor and not a battery. Having a capacitor instead of a battery, it can withstand frequent discharges. I have this Rangeman for month and have been using it daily. So far, its battery level remains at High even at frequent use and never goes medium or to low.

Water Resistant to 20BAR
20BAR is equal to 200 times the surface atmospheric pressure. It means it can withstand heavy rains and splashes, and can survive even up to 200 meters below sea level. So far I have only tested this watch up to 10 meters below sea with its buttons working and no damage happened.

Mud resistant
For a mountaineer, mud is already part of the trails and our lives. Had my self fall while on the trail during the Mt. Marami - Pico De Loro traverse mapping expedition, exposing this watch in shock and mud and no evident damage seems to have impaired its functionality.

Radio-controlled time synchronization
This watch automatically synchronizes its time with the atomic clock 4 to 5 times a day when signal is available. In the Philippines, the nearest signal source for time synchronization is Hong Kong and is roughly 2400 kilometers away. This watch then hardly can synchronize with the atomic clock however I have tested that I get successful syncs when you are at the mountains or the western shores of the country while pointing your watch to northwest. Real world testing gave me successful syncs when I am at a campsite in Mt. Marami, at Camp 2 of Mt. Pulag, and Patar Beach of Bolinao, Pangasinan. If you cannot use this radio-controlled sync feature, you can still have a 1/15 second accurate watch anyhow. You can choose to automatically set the synchronization and manually do it yourself when you are at the locations I specified where it can get a radio-controlled time sync. 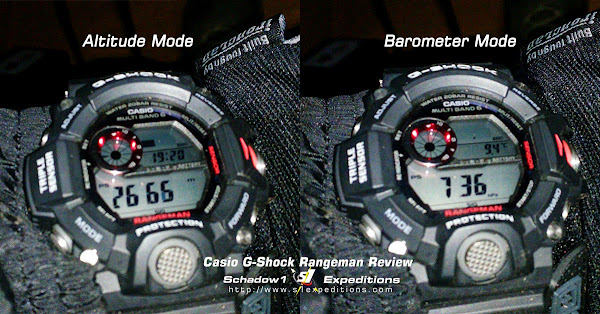 The barometer or atmospheric pressure sensor precision depends on its calibration and may fail on its accuracy once in a while as its sensors are not par with professional sensors used by weather agencies. But its functionality is sufficient for outdoor recreation purposes. This watch has a calibration functionality for its barometer thus it is recommended that you adjust/calibrate its values with the nearest weather outpost in your area before every hike to get accurate results. I usually go to DOST-Project NOAH and click on the nearest weather station and get the latest atmospheric pressure values before every hike.

As the altimeter of this watch depends on atmospheric pressure changes as you go up, it is also highly important that you calibrate your altitude readings prior every hike by calibrating the barometer first with the nearest weather station (as stated above). Once you have calibrated the barometer, you need to calibrate the altimeter by knowing your exact location and refer to a topographical map for your current elevation. Our blog distributes a highly accurate topographical map of the Philippines as derived from data provided by NASA-SRTM and Japan's ASTER GDEM missions. I usually do an altimeter calibration before every hike right at the mountain's jump-off. 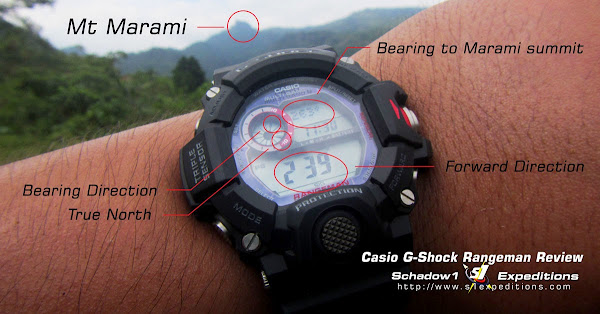 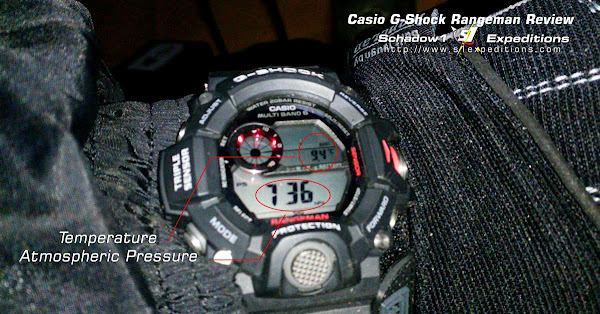 Rangeman has a built-in temperature sensor where its value is shown under Barometer display. Calibration can be done once in a while and is not needed frequently. I usually use a reliable weather thermometer to get the room temperature and match the readings with the Rangeman's 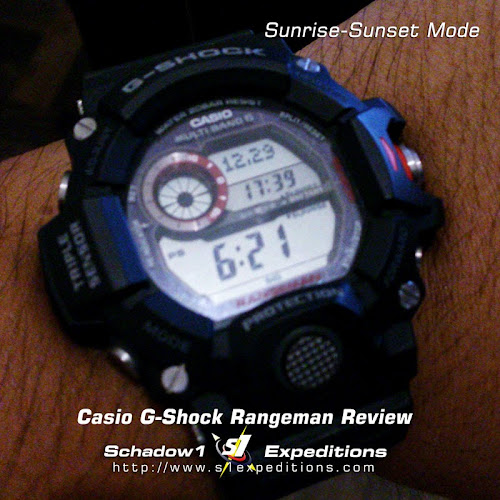 This watch has a sunrise and sunset time functionality. For mountaineers, knowing when the sun rises is as important as when the sun sets so we can plan ahead on our itinerary for each climb and know the needed gadgets to bring if in case we seem to see that the trek duration may lead to a night trek. As for myself who always chases sunrises and sunsets, this is very important to me. As such when I was in Mt. Pulag to catch the sea of clouds during sunrise, I have an idea on how I can take my pace during a trek to ensure I can reach the summit before the sun rises. We left the Camp 2 of Pulag at 4:00 AM and reached the summit at 5:30AM, Exactly 40 minutes before the expected sunrise time so I had enough time to set up my photography gadgets before the captivating sunrise and sea of clouds took place.

To calibrate the sunrise/sunset time, you must input the exact coordinates of the summit into your Rangeman before every climb.

Recording Mode
You can record compass, barometer, temperature, and altitude readings manually and also get the maximum, minimum elevation readings, plus the cumulative ascent and descent during a hike.

Standard G-Shock Features
For being a Casio G-Shock watch, it has the same features as other G-Shocks such as Stopwatch with split mode, Timer, Alarm Clocks (3) with snooze and hourly signal mode, World time, Illuminator (backlight illumination and not just with one LED light) that can be set manually or automatically.

GPS Device vs. Rangeman's Triple Sensor
As for accuracy in elevation and compass readings, still, no one can beat a GPS device as the GPS aside from giving off your exact coordinates, it can automatically adjust magnetic declination for your compass readings, and the elevation readings is not based from atmospheric pressure (which is variable) but through triangulation of multiple GPS satellites which gives an average reading between satellites to give you an accurate reading of your elevation.
However, a GPS device evidently consumes more power than a watch and GPS does not have atmospheric pressure sensors to warn you of impending weather changes while on the trail.

Pro-Trek vs Rangeman
The triple sensor Pro-Trek watches have the same capability as the triple-sensor of Rangeman, except that the Rangeman is more indestructible for being a G-Shock and has Sunset/Sunrise times.

GPS Watch  vs. Rangeman.
The comparison would be the same as how we differentiate a GPS device vs Rangeman's triple sensor. And so far, available GPS watches (like Suunto GPS watches, etc.) in the market today is not as indestructible as a G-Shock Rangeman. The only GPS watch that can beat all the capabilities of a G-Shock Rangeman is G-Shock Waveceptor.

Conclusion
The G-Shock Rangeman is so far the best watch for its kind and at its price range that live up to its durability and its intended functionality for hikers. I have a Rangeman watch for a quick look and quick recording of readings during our mapping expeditions and provide as an emergency guidance tool in case something happens to my GPS device (battery runs out, damage, etc.). The GPS device + the latest GPS-navigation map of the Philippines remains as my primary tool in navigation guidance during my expeditions.