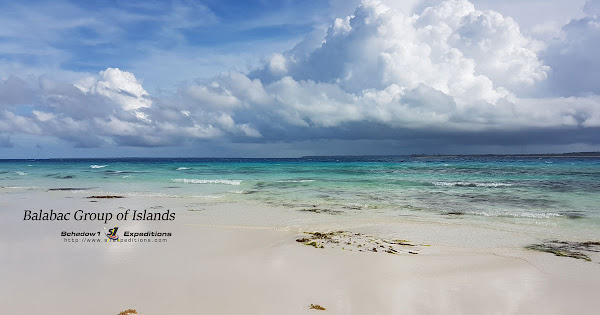 Bordering Philippines and Malaysia, there lies a group of islands at the southernmost tip of the province of Palawan. Unknown to many, these islands have one of the best and fine beaches in the country and probably the world. Composed of over thirty islands and numerous sandbars including endemic species such as the Philippine Mouse-Deer and the Philippine Eagle. Schadow1 Expeditions was there to map it and see for ourselves the beauty that these islands possess.

When we heard about Palawan, we always think about El Nido and Coron, as well as the Underground River. It was Schadow1 Expeditions first time to get to the main island province of Palawan, yet we decided to take the road less traveled and headed south of Puerto Princesa, Palawan's capital city, instead of going north to the famous El Nido.

Balabac has been on my mind since 2013 as I've seen that satellite imagery on the islands are still of low-resolution and this group of islands has not yet been extensively mapped. But it is only this year that we had a chance to get there with the help of a friend who owns a tour company to Balabac.

We were never wrong from our decision, as Balabac seems to be one of the best island-hopping and sandbar hopping destination of the country.

How to get there

Balabac is at the southernmost tip of Palawan, near the Malaysian border. It can be reached by traveling through land from Puerto Princesa all the way to Rio Tuba and a ferry to Balabac. The nearest port to Balabac, however, is the Buliluyan port at the southern tip of Palawan but as of this time of writing, the road from Rio Tuba to Buliluyan is still under construction and mostly unpaved and muddy. By land, Puerto Princesa to Rio Tuba is around five hours away and boat ride from Rio Tuba to Balabac is about 3 hours. We took the less-crowded port, which is Buliluyan by taking a van from Puerto Princesa directly to Buliluyan for six hours and a 2 hour boat ride to Balabac.

The Balabac Island Group is inhabited by the Molbog to which their major source of income are from fishing and trade with the nearby Sabah and Malaysian islands. Although people from Sulu, Negros Occidental, Misamis Oriental have also migrated to Balabac over the years making the people of Balabac to have mixed cultures from Visayas. Tagalog is also a common dialect in the islands due to people coming from the main Palawan island.

Trade
Due to its proximity to Malaysia which is just three hours away as compared to Puerto Princesa which is about seven hours away, most of the products are already Malaysian-made.

As the Balabac Strait, north of the main Balabac Island, is used as the international route for boats plying from Malaysia to the West Philippine Sea via the Philippines, most of the delivered goods are passing along the route to the main Balabac town. The southern portion of Balabac to where the Malaysian border is located are shallow waters therefore larger boats could not use this route for trade.

The largest among the islands in the group is Balabac. Mostly agricultural and forested with mountains as high as 500 meters above sea level.

The next larger island is Bugsuk Island, to which at its southern most tip is the Punta Sebaring Beach. This beach is so far the largest beach in the island group and possesses the finest white sand I have seen so far with pine trees at its northern portion.

Gabung island is a tree-sanctuary and is known to be inhabited by the large Philippine Eagle or the Monkey-Eating Eagle. When we passed by the island, two eagles were seen flying over the island as pointed over by Barangay Captain Rolando Noe (Kap Andong), a barangay captain of Balabac who is a tourism advocate in the group of islands.

Candaraman and Canabungan islands are the best islands for beach camping as it has palm and coconut trees all over the islands and possesses a long coastline with fine white sand. During the time this article was written, Candaraman  (coordinates 8.0837N 117.1014E) is still used as the main basecamp for travelers for Balabac to which its beach is facing west giving the best view for sunsets. And its waters are filled with luminous planktons that seem like stars on the sea during a moonless night.  Canabungan  (coordinates 8.13448N 117.12986E) possesses more potential for tour-camping as the islands northern point has great view for both directions whether for sunset and sunrise.

Patawan Island (coordinates 8.2336N 117.1396E) is actually an islet which serves as the "heart" of Balabac Group of Islands as it is at the center of the group.

Mangsee Islands (the North and South) are the southernmost islands of the Balabac group and is already bordering with Malaysia. (coordinates 7.5083N 117.3130E)


The best so far is that there are scattered sandbars all over the Balabac Strait making this group of islands one of the best there is for island and sandbar hopping.

Sandbars in Balabac are usually unnamed as they are of no relevance to trade in the locality. These sandbars are usually submerged during high tide. It is only by 2013 that they were given importance as the tourism started to kickstart as the beauty of the islands gets discovered. A few of the sandbars are then named after the owners of the tour operator (Kilometer Zero PH) that started to open Balabac to backpackers. These includes KMZ (coordinates 8.0948N 117.1085E), Elvie (coordinates 8.13869N 117.15129E) and Angela Sandbars (coordinates 8.1514N 117.2170E); the latter being the longest of the sandbars.

Kapitan Andong has generously offered one sandbar to be named after me and my wife because of mapping their islands: BenLen Sandbar (coordinates 8.06954N 117.09553E). The sandbar named after us was filled with starfishes when we got there.


Our mapping expedition to the Balabac Group of islands enabled us to add over 4,000 updates to the map of the Philippines and properly named most of the islets as the locals call them. These updates include boat routes, places of interests, as well as sandbars. These updates are then donated to the OpenStreetMap community and has started to reflect on the December 21st 2016 version of our GPS Routable Map of the Philippines we provide for the country. The map for your GPS navigation devices is available at our #mapPHL page.