Tawi-Tawi: A mapping expedition to the Philippines Southernmost Sojourn 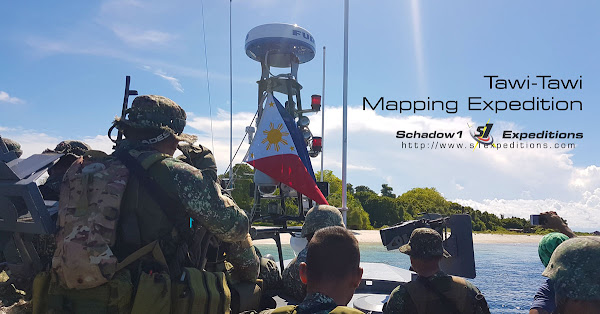 Tawi-Tawi is the southernmost province of the Philippines with about one hundred seven (107) islands scattered across the Sulu archipelago. It is bounded on the north by the Sulu Sea and the south by the Celebes Sea. The province is known to possess beautiful islands with powdery white and pink beaches, shallow turquoise waters, flourishing ecosystem and numerous sandbars. Hence, our original mission was to map the province for tourism development. Chain of events has made this expedition more complicated as we have originally planned.

It all began as an invite by Chino Gaston, a field reporter for a major TV network in the Philippines. He also happened to be a part of the first batch of the Wilderness Search and Rescue (WiSAR) to where I had contact with its founder, Dr. Ted Esguerra, during my short stint as a chief of science research of a now discontinued government project for mapping hazards.

We were already in high hopes. A few days before our expedition to the Philippines' southernmost islands, Martial Law was declared in Mindanao due to the terrorist occupancy of Marawi. We thought we can no longer proceed, but we believed that it was vital that we push this expedition as the mapping data we can gather from this mission is crucial for the country. And so our expedition came to light and it happened.

Tawi-Tawi is the southernmost province of the Philippines situated at the Sulu Archipelago. For military-speak, this province is vital as this archipelago is a link to the country's ASEAN neighbors, Malaysia and Indonesia; having its southernmost island, Panguan, at only about 35 kilometers of the nearest landmass of Sandakan province in Malaysia or a merely 30 minutes of boat ride over the sea. What makes Tawi-Tawi important is that this province is the farthest province to the capital, and provinces of our ASEAN neighbors along its vicinity is also the farthest as far as the capital of Malaysia and Indonesia is concerned. Thus, due to proximity, terror cells from religious extremists roam around these areas to plot terror on neighboring cities and provinces on the three mentioned countries.

Due to the on-going conflict in Marawi City and the declaration of martial law under the Duterte administration, our initial mission to promote Tawi-Tawi's tourism was changed. We are to map far-fetched islands of Tawi-Tawi that can potentially be used as a passage by terrorists; and with the help of drones, we can trace an updated map of the islands using an aerial photograph. This map can then be used for strategic purposes on the Philippines' war on terror. Improving its map can help the military plan strategic choke points for the enemy. Doing so would eliminate reinforcements coming from other countries, and at the same blocking them off from escaping the Philippines when they withdraw.


The entire Armed Forces of the Philippines assisted us during our mapping expedition.

Through the Philippine Marines in Tawi-Tawi, under the guidance of Brig. Gen. Custodio Parcon and Col. Chito Rojas, they hosted our stay and organized our itinerary. The Philippine Navy brought us to our mission objectives, while the Marines and Army's elite Scout Rangers were deployed with us in the islands.

Panguan
(coordinates N4.71052° E119.03128°)
The southernmost island of the Philippines is Panguan, located just at the edge of the Philippine-Malaysian border as documented under the baselines law of the Philippines. It is a small 6-hectare area island with powdery white sand and turquoise waters. It is inhabited by a small family housed in about five make-shift houses in the northern tip of the island. They are a member of the Badjao tribe and are friendly and speak Sinama dialect. Due to the remoteness of the islands, they barely understand English nor Tagalog. They also do not have a concept of days in the Gregorian calendar, instead, they count seasons. Although they are still in the Philippines, they use Malaysian Ringgit against using Philippine peso for trading as they buy their resources from Malaysian traders that are only 30-minutes away as compared to the main Tawi-Tawi island that is 3 hours of boat ride away.


Mardanas
(coordinates N4.72137° E119.14508°)
The Mardanas island is a larger, 10-hectare island and is now uninhabited. But structures remain and is used by the Armed Forces as military headquarters. Similar to Panguan, the island is surrounded with white powdery sand, turquoise waters and beautiful corals surround the beach; with grasslands dotted with coconut trees at the middle. This island is officially known as Siluag, however locals and the military call this island as Mardanas. The erroneous naming of this island as Siluag in the geographic naming system (GNS) was probably due to a geographical survey made by Americans in 1935.


Andulinang
(coordinates N4.77216° E119.24194°)
Andulinang Island is a 2-hectare red-soiled rocky island that lies at the westernmost portion of the Andulinang Reef and has a small beach at its eastern side facing the large reef. While its community is on the eastern side of the island with houses built on stilts above shallow waters. Atop the island is its community center and a mosque. It has a smaller 0.4-hectare uninhabited rocky islet adjacent to it and is called Anduligan.

Sitangkai
(coordinates N4.67613° E119.41611°)
Due to the fact, the Tawi-Tawi is the southernmost province of the Philippines; located at only about 4 degrees above the equator, the possibility of typhoons to enter or to form is highly unlikely. Cyclones or typhoons are formed due to the sustained spinning of air along a low-pressure area in the atmosphere, which later also gains forward velocity to swath across its path. Through the Coriolis Effect, the nearer an area is to the equator, the less likely air spins, thus cyclone normally does not form or plot its path on Tawi-Tawi.

This would have made Sitangkai  a "water-world" town due to calm waters. Its community is entirely built on stilt-houses on an area of about 85 hectares of shallow water with nearby islands that surrounds it. And these islands are usually and oddly not used as residential areas, instead, these islands are utilized mainly for grazing.


Sibutu
(coordinates N4.84572° E119.45679°)
The island of Sibutu is characterized as a boomerang-shaped island with a 120-meter high hill by its center. Communities are along its shores, while the island is famous for its Kaban-kaban, a deep and bluish swimming hole which is a source of potable water by the communities that thrives in it.


Panampangan
(coordinates N5.06118° E120.07197°)
An island situated at Sapa-Sapa town, located just at the south of the main islands of Tawi-Tawi province. It is characterized as a white beach with shallow waters and with a vast sandbar.

Turtle Island (Taganak)
(coordinates N6.08068° E118.31363°)
Taganak is situated in the middle of Sulu sea and is midway between Tawi-Tawi and Balabac of Southern Palawan. It is named as Turtle Island due to the presence of the great Pawikan (Sea Turtle)  that mostly thrives and lay their eggs along its shores. It is about 6 hours away from Bongao but is only 30-minutes away from Sabah.

Main Islands of Tawi-Tawi
The main and largest islands of Tawi-Tawi is comprised of Sanga-Sanga, Bongao, Sapa-Sapa, Tandubas and Tawi-Tawi Island. Bongao is famous for its mountain, the Bud Bongao (coordinates N5.01567 E119.74528) , a cliff mountain lone standing at 322 meters above sea level amidst the low lying lands of the entire island.


During the mapping expedition, we were able to cover 1,640 kilometers of surveyed  data and about 1,957 unique mapping data from 12,512 contributions which include accurate names of data, structures, trails, and barangays:

Our expedition team is composed of Chino Gaston of GMA News, Lawrence Sagabaen; Macoy Mejia and JP Cruz (Vagabond Pinas) who both served as drone pilots for aerial photography and reconnaissance, and Ervin Malicdem of Schadow1 Expeditions for technical mapping.


Data obtained from the 2017 Tawi-Tawi mapping expedition is donated to OpenStreetMap and navigation data is compiled to offline GPS navigation map of the Philippines. The map data from this expedition is available starting with the v20170607 version of Schadow1 Expeditions offline GPS map, which can be used for navigation guidance for tourism, logistics, and military, as well as disaster risk reduction purposes. Other mapping applications based in OSM data may be able to capture the Schadow1 Expeditions mapping data for their maps and may be available earliest on July 2017.