Crocodile Island of Cagayan, an islet with many names 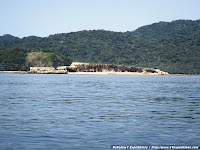 Crocodile Island, as it is famously known by the locals and tourists of Sta. Ana, Cagayan at the northeastern tip of the Philippines is a lone island cliff situated at the middle of Balintang Channel just off the shore of Barangay San Vicente of the main town. The island is a must visit as it is blocking the way to Palaui's main village, Punta Verde. The waters to it is shallow and can be used as a snorkeling spot as well.

The Crocodile Island is known to many names. Other alternate names includes Manidad Island which is its primary name to the locals when the area is not yet a thriving tourist spot. Another name is Rona Island of which this name has been registered at GNS with UNI -3372591.

Most of the islet's area is submerged in water whether high or low tide except for its marble cliff feature that is shaped liked a sleeping crocodile, hence its popular name.

The island has no crocodiles instead it is a thriving habitat for oysters and small fishes trapped along the creases of the marble.

A short climb to the marble feature is a definite activity to this islet where one can see a beautiful view of the nearby Sta. Ana mainland, the tip of Luzon, the nearest Jerolynda Beach and Palaui Island. It is important to note though not to go to the edges of the cliff feature as it can easily chip and one may fall 10 meters to the ground.


There are also enclaves to the side of the cliff where locals are fond to use it as a shelter for their small get-together after fishing or transporting tourists to and from the other islands.

The data gathered in this Sta. Ana, Cagayan Island Hopping including a stop over to the Crocodile Island has been contributed to the +OpenStreetMap Philippines  project for free use of adventure enthusiasts who plan to reach this islet with GPS assistance.