Optimal Tilt of Solar Panels in the Philippines 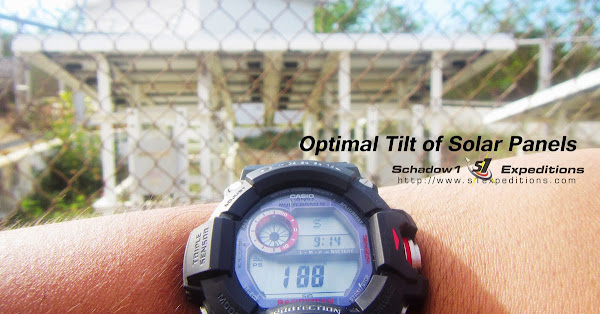 Solar panels are effective when it faces perpendicularly to the rays of the sun. However, the sun does not stay exactly where it is as the earth rotates giving the sun its sunrise and sunset. And the sun does not tread the same location in the hemisphere as it moves about an angle depending on the time of the year. Hence a solar panel must have varying positions to maintain its maximum exposure to the sun. This article tackles about optimum solar panel positioning in the Philippines.

The sun moves from east to west at varying inclination respective from north to south depending on the month of the year. This is brought about by the earth's axial tilt that is currently at 23.4°.  Thus the sun treads east to west on the skies at a north-south variance of 46.8 degrees all throughout the year; having its maximum angle hitting its direct rays every December 21st at 23.4° degrees south latitude (Tropic of Capricorn) and 23.4° north latitude (Tropic of Cancer) every June 20th. These solar maximums are called solstice. Through this, the Philippines is located between 4° to 22° north latitude and using these variables, you can calculate the optimum position of solar panels in case the panels will be setup on a fixed position depending on your location in the country.

As the country is located north of the equator, the sun, at most times of the year will be treading from the south. If you are in Metro Manila which is located within 14° to 15°N latitude, the sun will tread north from May to August; and south from September to April. Thus most of the time of the year, the sun will be at the south. For the solar panels to obtain its maximum exposure, it also must face south.

As an example, the solar panels which powers the Bolinao Lighthouse at Pangasinan is facing south. (see cover photo)

Aside from knowing where the solar panel faces,  the optimum angle must also be known. Incidentally, the solar panels must be at mostly perpendicular to the sun and as it varies all throughout the year, we have to get the angular average of the sun respective to your location's latitude.


The keyword is "perpendicular". Thus when the latitude is below the axial tilt angle of the earth (23.4 degrees) where the Philippines is located, the calculation for the solar panel average optimum tilt would be latitude=angle from horizontal facing south.

But, we also have to consider that the sun gets dimmer as it nears the horizon and brighter when at the zenith (topmost location in the sky) due to atmospheric absorption. A correcting factor of 81.2%* has been derived for its annual average.

As an example, the Bolinao Lighthouse is located at 16.30704°N latitude. Thus, using the formula above, its solar panels must be facing south at an angle of  13.24131648° from horizontal.


If your solar panels are installed on a fixture with a manual tilt mechanism,  you can change the facing of your panels per month using the following formula below based on your (1) latitude, (2) indicated monthly average correcting factor and (3) the latitude where the rays of the sun is directly hitting during the month:

Note: The insolation correcting factor values presented with this formula is the Philippine country average. If you need precise calculations for your exact city (Philippine cities/towns only) and if in case facing your solar panels directly to south or north is impossible, we provide a more precise optimal tilt values for custom scenarios for a fee. For inquiries, you may contact me.


Obstructions to the solar panels


It is worth noting that the calculation is based on a scenario that there will be no objects that can cast a shadow to the panels anytime of the day. If that may be the case, if there is a tree nearby, you can use the moss on a tree trunk as a definitive hint. Whenever you see a mossy tree trunk, its opposite dryer side is the optimum direction where you can face your panels. However, the optimum angle has significantly changed if it is no longer facing south. For a more precise optimum tilt value, we provide a more precise value for custom scenarios for a fee. For inquiries, you may contact me.


This guide however is only for optimum tilt of solar panels for fixed and semi-fixed installations. You can however purchase a "sun-chaser" using actuators and a light sensor to which its axis moves from east to west. Using this gadget can automatically tilt your panels to the brightest area of the sky in a day.

To obtain your latitude, head on to OpenStreetMap and find your solar panels coordinates. 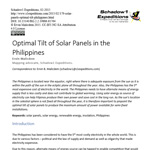 Abstract
The Philippines is located near the equator, right where there is adequate exposure from the sun as it is within the path of the sun in the ecliptic plane all throughout the year. Also, the Philippines has the 5th most expensive cost of electricity in the world. The Philippines needs to have alternate means of energy supply that is less costly and does not contribute to global warming. Using solar energy as source of electricity can help Filipinos produce their own power and save cost in the long run. As the sun’s location in the celestial sphere is not fixed all throughout the year, it is therefore important to pinpoint the optimal tilt of solar panels to produce the maximum amount of power available for semi-fixed installations.
DOI: 10.13140/RG.2.2.19886.61764
Pages: 9
Publication: 02-2015
Download