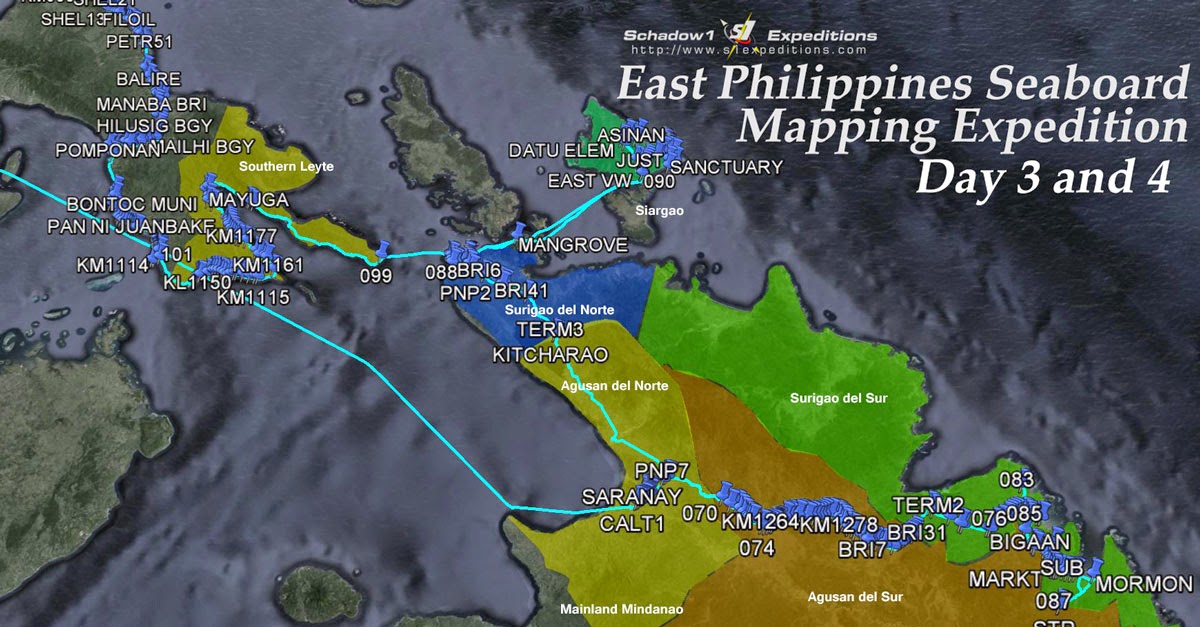 February 27 - March 5, 2015
As we continue on our narrative to the East Philippines Mapping Expedition of 2015, we have temporarily left the main island of Mindanao towards the easternmost island of the Philippines. We have already covered 4 of the 13 provinces of the country in our 7-day mapping mission. Primarily covering towns of Philippines where it meets the waves of the Pacific and the wrath of typhoons during typhoon season. This is with a goal in ensuring vulnerable provinces are properly mapped for navigation accuracy in times of disasters while at the same time discovering the beauty of the Philippines.

Day 3 (Accidents and setbacks amidst the beautiful island)

It is the 3rd day of our expedition and the first day of March. Still not yet having ample sleep as we remain to be on the roads for 72 hours and after having charged our gadgets in a fastfood chain in Surigao City, we loaded on to a fast boat bound to Siargao at 5:00AM. The sunrise greeted while we are on Surigao Strait.

Another #sunrise at Mindanao as we head to Siargao on a fast boat #mapPHL #travelPH #itsmorefuninthephilippines Happening now at #Schadow1Expeditions
A photo posted by Ervin | Schadow1 Expeditions (@schadow1) on Feb 28, 2015 at 1:54pm PST


It was a 3-hour boat ride along the Surigao strait and we arrived Dapa Port of Siargao at about 8:40AM. Siargao Island is a large island composed of four municipalities. Dapa is the gateway to this island while General Luna is its center for tourism being the town facing directly to the by the shore of the Pacific and is famous for its great waves suitable for surfing and where hostels and bars for tourists are many. We are still unsure about our complete itinerary having known that is island is famous for tourists, we are expecting that prices here for both accommodations and transportation could be more expensive than when we were at Surigao. And we are also running on a limited time as we are still less than half of our coverage and we only have only seven days. Because of this, we decided to start to the farthest destination so that in case we end up by night time, we can head on to General Luna to stay at night.

Our first destination is at Magpupungko Beach located at the town of Del Pilar. This beach is famous for its natural pool that gets filled up by the ocean during high tide and becomes a natural "jacuzzi" at low tide. However getting there is not that easy for us. See Magpupungko Beach and Natural Pool of Siargao.

We hired a motorcycle (habal-habal) that agreed to to transport us to and from Dapa to Del Pilar then to General Luna for Php 700. We found out that the road along Kilometer 19 to 20 passed barangay Datu is under construction and is muddy. The motorcycle almost went vertical as it tried to find its way over the muddy and even part of road so we ended up walking instead until the road is leveled enough for the motorcycle. 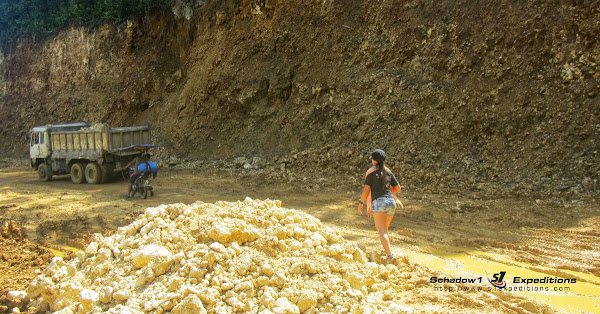 As we continued our way to Magpupungko while running at 45km/hr by Kilometer 21, the habal-habal's tire exploded leaving behind a 60-meter skid mark along the road and the motorcycle almost rolled over. Perhaps this has been my 5th motorcycle accident and has already been accustomed on how to make my way in trying to stabilize a motorcycle while it wiggles. But what made this different than the other accidents I had was that I was not the one driving and we were three on the motorcycle and no one knows how would our driver and my companion at the back can react which could further destabilize the vehicle. It was a good thing one final kick to the ground before the motorcycle rolls stabilized it to a halt. Leaving behind a big bruise on my lower leg and a burn scar as it made contact with the hot exhaust pipe when I kicked the ground. (coordinates 9.89306N 126.08953E) 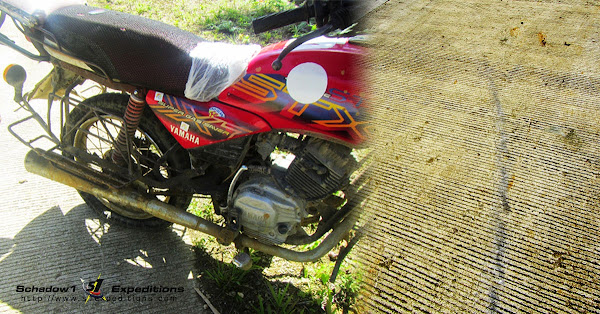 Aside from the slight injury we were all alright and waited for a motorcycle passing by to continue our journey and reached Magpupungko at 10:30AM. The sight is worth it and the natural pool is refreshing making me forget what had just happened. 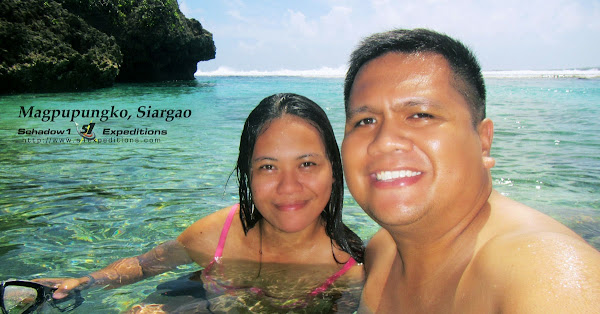 We left at noon to be on the road for an hour, finally reaching Barangay Catangnan of General Luna or more famous as being called Cloud 9. 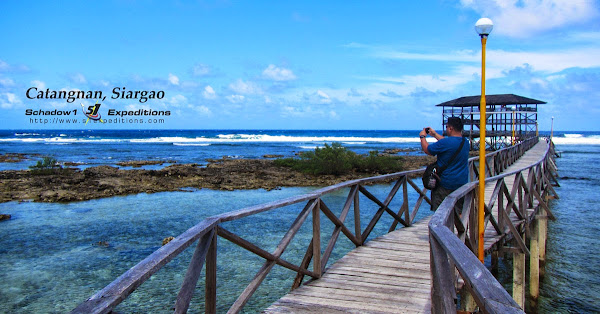 Our next destination is the southern shore of General Luna which is the jump-off for island hopping. Although Siargao only has a few islets, getting to them must still be part of your itinerary if heading to Siargao. We rode a boat at 2:00PM to map Siargao's three islets famous for its white sand and serene beach. We headed to the Naked Island, a white sand bar, Dako Island, and Guyam.

Naked Island is best for photo shoots due to its purely white sand beach, unobstructed view and turquoise waters; but be careful as Portuguese-man-o-war has been floating around the waters when we were there. The best islands to stay for the night are Guyam and Dako. See Island Hopping Guide at Siargao. 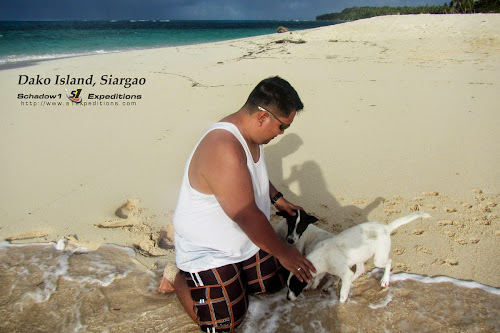 We got back to General Luna by sunset at around 5:30PM. Having ended our mapping mission for Siargao for a whole day, we decided to stay by the beach for the night before we can get a fast boat back to Surigao City at 5:00 AM. However, upon discovering the  absence of shower rooms by the port in General Luna, we were forced to move out for a 30-minute ride back to Dapa on a motorcycle chilly, damp and wet from taking a swim. This so we can wash and dry up and stay for the night and head back to Surigao City.

Staying on a 300-peso pension house for 5 hours was our first ever sleep on a bed in this expedition.

We woke up at 4:30AM to catch on the earliest boat back to Mindanao mainland at Surigao City. In no time, we are back to Mindanao and headed directly to Lipata Port to catch a Roro vessel heading to San Ricardo Port of  Barangay Benit, Liloan, Southern Leyte. At 10:30AM we headed to Southern Leyte accross Surigao Strait. This ended our mapping expedition the the eastern seaboard of northeastern Mindanao. 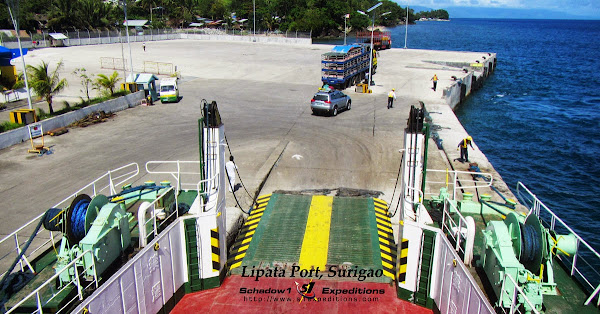 The Surigao Strait is famous for the battle that happened hear during World War II that infiltrated the remaining naval defenses of Japan on the area so the fleet of U.S. General Douglas MacArthur can pass through and head to the province of Leyte to fulfil his promise of getting back to the Philippines after forcefully leaving it as Japan took over the Philippines during the war. 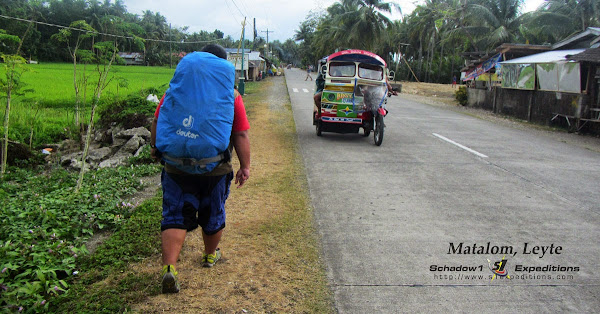 Upon reaching Matalom, we went our way to the back of its municipal hall to get a boat to its only white sand island in the area. It was off-peak season and is already almost sunset. Although getting to the island is cheap for only Php55 per pax, the boat to Canigao has a 25-pax seating capacity but we are only a couple. We are however fortunate of meeting Ate Belen who helped us get to the island without paying the boat on its full-capacity cost. See 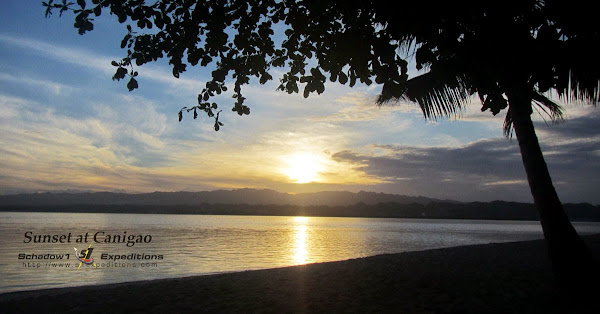 This article is Part 2 of our narrative to our mapping expeditions to the Philippines' eastern seaboard. This is Day 3 and Day 4 of our 7-day mapping expedition to the eastern seaboard of the Philippines; covering 13 provinces from Mindanao's Caraga Region to Eastern Visayas and Bicol which acquired over 500 waypoint data and covered over 2,700 kilometers of roads, trails and ferry routes. The data has been donated to OpenStreetMap Philippines and a GPS routable map of the Philippines is being compiled by Schadow1 Expeditions regularly to which it can be used for navigation assistance for tourism and humanitarian purposes.