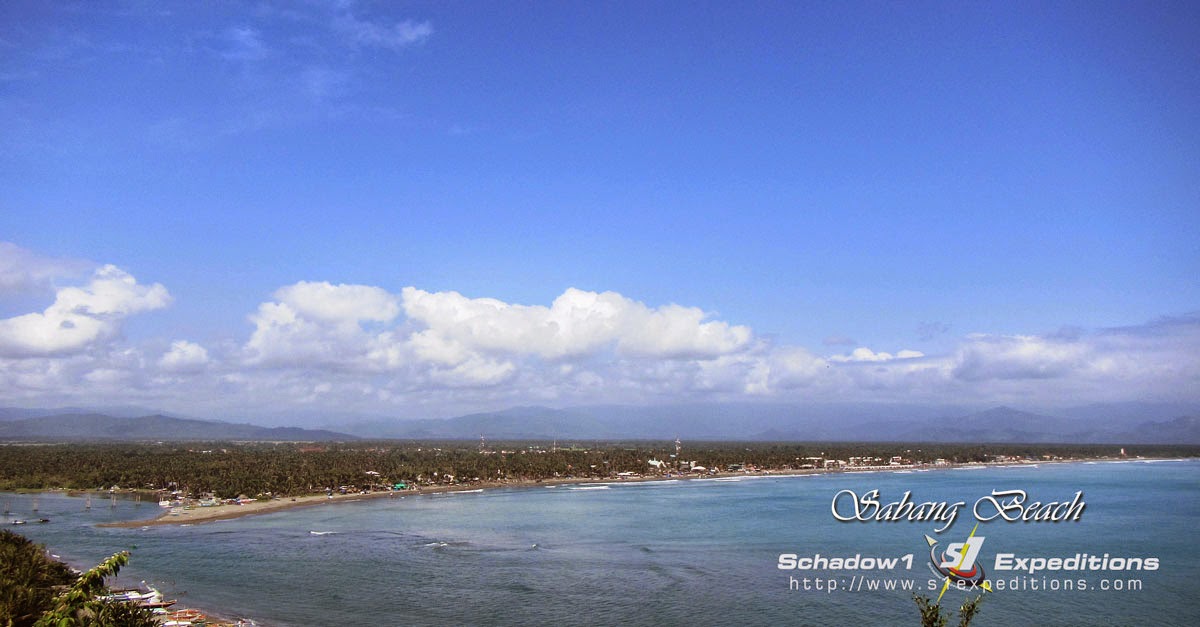 If you are at the Philippines and surfing is in your mind. There is only one location that is dubbed as the surfing birthplace of the country. It is Baler in Aurora Province. Although known for surfing having a two-kilometer beach facing the Pacific Ocean, there are still many things to do here. Aside from the gray surfing sand of Baler, there are other white beach to bum at, rock formations to climb, and water falls to trek to and swim. The town also boasts a history that crafted the Philippines during the early 20th century. This is Schadow1 Expeditions guide on how to get to Baler and things to do while at this laid-back town.

Baler can be accessed via bus ride. Genesis Transport in Cubao (coordinates 14.62570N 121.04866E) offers a direct bus route to Baler using their regular airconditioned buses that leaves starting at 4:00AM as well as their executive coach which they call as JoyBus. And the land travel takes about 6 hours. If you are unable to catch a bus direct to Baler, you can opt to ride any bus going to Cagayan as the end-point and be dropped off at Cabanatuan, Nueva Ecija. From Cabanatuan's Central Terminal (coordinates 15.47241N 120.96896E) , you can ride small buses or vans going directly to Baler which is still about 2 hours to reach coming from Cabanatuan.

The last trip of vans going to Baler from Cabanatuan is 2PM. Going back to Manila, the vans and buses last trip to Cubao or Cabanatuan is 5PM from Baler Transport Terminal (coordinates 15.75464N 121.55856E).

Locations from within the central town of Baler can be accessed via tricyle for Php 10 per pax. Although you can rent for a tricycle for one whole day worth Php 800 to send you off to various tourist spots from within Baler and nearby town including those spots in Maria Aurora and San Luis.


Sabang is a 2-km stretch of gray sand beach famously known as the surfing birthplace of the Philippines. The northern half of Sabang beach are proliferated with hotels and restaurants and parties are everywhere. While the southern half is a laid-back beach proliferated with guesthouse and transient inns. Depending on your preference, you can opt to a serene experience to a party-beach bumming.

The beach side is proliferated with surfing schools, restaurants and grills and is also a best place to put up your tent and enjoy the beach which is facing east thus a great place for sunrise watching. The beach nearest the shore is a public beach where you can place a tent for free. And under the elevated concrete beach footway located at the northern half of Sabang beach is also a good place to put up your tent for free. But be aware that this is a public beach thus no one will be guarding your belongings.

There are also areas that provide a space for camping out but for a fee. And these can be found mostly on Sabang Beach's southern half near the mouth of Duongan River. Although these private beach campgrounds still would not be liable for any lost belongings, they offer restrooms and bathrooms that are not available on public areas.

Cheaper homestays and guesthouses are available at Sabang's southern half and this includes Secret Spot (coordinates 15.75566N 121.57279E) where we stayed for three days and where I learned to surf for the first time.

If you opt for a more comfortable hotel-type stay, the northern half has it all.

For more information about Sabang Beach, you may go to our article Sabang Beach of Baler - The Birthplace of Philippine Surfing

The central part of the town is where the historical sites are located. Baler is the birthplace of the country's second President and the first after the colonial rule of the United States of America.
Baler Museum (coordinates 15.75983N 121.56182E) boasts its collection during the time of President Manuel Quezon's childhood and also its collections during the time of Spanish colonization where Baler is part of the drop-off during the Galleon Trade. 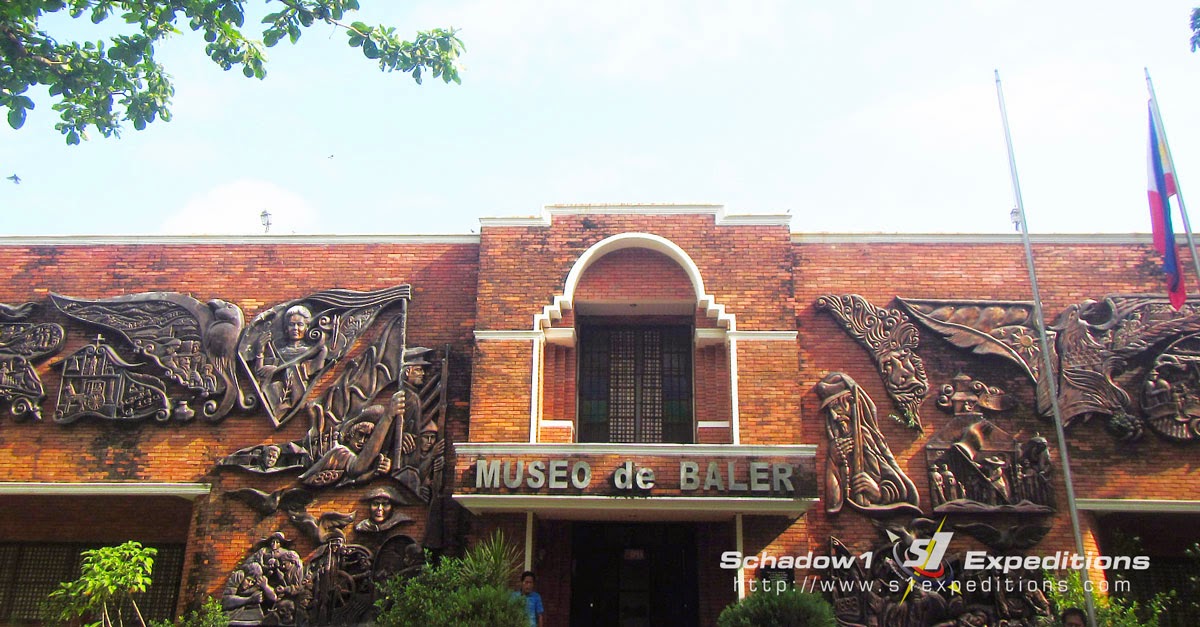 A few streets away is the house and birthplace of Manuel Quezon (coordinates 15.75860N 121.56255E) where his presidential vehicle is kept.


The hill was part of Baler's passed when during the 16th century, a tsunami struck Baler and wiped out most of its inhabitants; only saving a few who were able to climb the hill. This hill is now used as a religious site for pilgrimage and also as a view deck park that lets you enjoy the view the entire stretch of Baler Bay and Pacific Ocean from the hill top. This also houses the Tromba Marina, a monument depicting the escape of the inhabitants from the tsunami.


The Diguisit Rock formation is located between Cemento and Diguisit Beach where is stands just right at the Cobra Reef.

The Diguisit beach is a semi golden-white sand which is more pristine than Sabang Beach however it is short and has a rocky shore. This beach is perfect as a beach bum location and the area is privately owned and called Dela Torre beach resort. Entrance free if you use its facilities is Php 25/pax but it remains free if you just happen to pass by and climb the Diguisit Rocks.

The Cobra Reef on the other hand lies beyond the Diguisit Rock formation and becomes a more challenging surf spot during high tide.

For more information, you may read our article Diguisit Rocks and Cemento Beach - an escape for rock climbers and surfers


A few kilometers away from Diguisit Beach is a the Diguisit Falls. A waterfalls that is located just by the side of the main road leading to Dicasalarin Cove. You can see the waterfalls by climbing a few meters and you can take a dip to its cold waters during a hot roadtrip day.

Further south along this road are other similar rock formations such as Aniao Islet.

At the end of the road is a hill that can only be accessed by bigger 4x4 vehicles and usually tricycles could not get to it although some motorcycles are offering their services to reach this hill. At the top of the hill is the Baler lighthouse and the PAGASA Doppler radar which is used to warn Luzon of developing storms in the Pacific.

Traversing the hill is the pristine Dicasalarin Cove, a white beach cove of Baler. But due to politics and commercialization, this cove could only be accessed if you pay Php 300 at the Costa Pacifica hotel located at Sabang Beach. Costa Pacifica Hotel and Dicasalarin Cove are now owned by the Angara family, a prominent political clan of the province of Aurora to which one of its members is an incumbent senator of the country.

Fifteen kilometers away from Baler is the famous 600-year-old Balete tree and Asia's largest. Located at the adjacent town of Maria Aurora. You can climb the five-storey high old tree or pass through its wide fig-proliferated trunk. The tree is so old and large that its trunk occupies 191 square meters.

For more about the Centuries-old Balete Tree, you may read our article Six Hundred Years of its Legacy - The Asia's Oldest Tree in Aurora

Ten kilomters away from Baler is the town of San Luis where the largest and grandest waterfalls of Aurora Province is located. Ditumabo Falls can be accessed via 45-minute or a four-kilometer trek from the jump-off and you would be welcomed with a large waterfall coming from a fifty-meter high water source. Get a dip on its wide basin that serves as a cold swimming pool for the tourists.

For more details, you may read our article Ditumabo Falls - the mother of all waterfalls in Aurora

Most of the hostels and guest houses in Baler costs Php700 per room that is good for 2 people while prices can get as high as Php4,500 to Php13,500 per night to expensive posh hotel such as the Costa Pacifica resort. Private tent spaces at the southern half of Sabang beach costs Php 200. We stayed at Secret Spot pitched our tent there.

Cheaper guest houses and hotels are available at the main town far from the beach front.


Food
Sabang beach offers a wide variety of food from buffet to grills and more. Buffet costs at an average of Php 200 per pax.

Although the food offered by carinderia's are equally tasteful and costs only about Php 60 per order.

Baler is known for its purple yam glutinuous rice (purple suman) and costs Php 30 for a bundle of 6. These are sold almost anywhere. We bought some of this at the Centuries-old Balete Tree Park.

3D2N stay at Sabang Beach, Baler and a day trip to its water falls, rock formations, and beaches.


This travel guide has been a result of our mapping expedition to the town of Baler. The mapping data has been contributed to  +OpenStreetMap Philippines  and RoadGuide Philippines. A map based from Openstreetmap data is being generated by Schadow1 Expeditions in a regular basis which can be used with your GPS navigation devices to guide you on your travels and hikes. This is so a Filipino would not be a stranger to his own motherland. The map is downloadable for free at our #mapPHL page.


For a more detailed account of Schadow1 Expeditions on its mapping expedition of Baler, check on the links below: