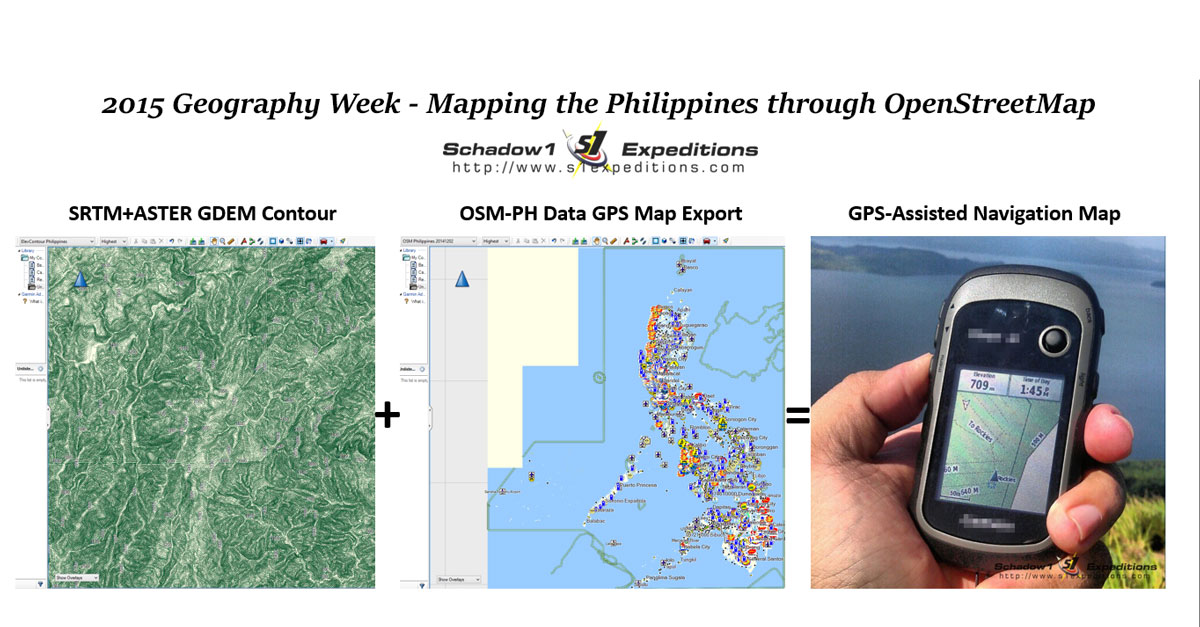 It is Geography Awareness Week in the Philippines... where geography and maps provide a vital role for the community and the whole country itself. The Mozilla Foundation in the Philippines has realized the importance of the combination of opensource, crowdsource, and a map. And with this, they have partnered with the Map the Philippines Project and OpenStreetMap Philippines to provide and introduction talk to maps and its importance to the country.


I myself as a contributor to OpenStreetMap Philippines was invited to speak about OSM, the data I contribute to the consortium through my expeditions, and how vital this information can be for the society.

With several mapping advocates from OSM, we have presented the basics of OpenStreetMap as a whole and how these contributions can be accessed and exported to various projects for community improvement, tourism, disaster management and resiliency programs of various organizations in the country.

With maps, especially if it is opensource and crowd-driven, a lot of capabilities are possible.

Aside from being one of Schadow1 Expeditions' primary choice to upload its contributions, OSM itself is open and crowd driven. This makes sure that the data will remain free and and can be used, re-used in to various possibilities. Even if in the worst scenario the foundation itself dies, the data can be revived on another project. With this, the people decide the fate of its data. This is with the condition that people also bring back something to the community: may it be data, a product, and compensation. This makes the project to continuously live at all cost.

Being crowd-sourced, the data itself can exponentially increase and encouraging locals to contribute data would eventually give first-hand mapping information to the maps. But what about vandals? Yes, as good as the project may sound, there are still antagonists. Yet, the involvement of the community ensures that these data remains to be fixed as soon as an advocate sees inconsistencies.

As of to date, there are over 1000+  contributors in the country but so far, there are only about less than fifty who are active. Yet they are growing as local government units have identified the importance of using OpenStreetMap to the community. Pampanga is one of the provinces that officially uses and contributes data right after the World Bank has considered teaching the use of OpenStreetMap to the Philippines as essential for disaster risk management. Last 2013, before the landfall of the strongest typhoon in history in the eastern shores of Visayas in the Philippines, the OSM Philippines community has already been active not only in mapping but also in teaching mapping for the Filipinos.


OSM and Disaster Management in the Philippines

OpenStreetMap has been an integral part of disaster management in the country. The Department of Social Welfare and Development is using OpenStreetMap as the basemap for its projects since the Zamboanga Siege of 2013 and from then has been using the map to overlay their social welfare projects during calamities and conflicts in the country.

Last year, the Department of Science and Technology, via its Project NOAH, which stands for the Nationwide Operational Assessment of Hazards, has started using OpenStreetMap as one of its basemaps and its mapping data as an integral part of its WebSAFE API for assessing the needs of a city or a community in case disasters strike a certain locality. Giving out flooding data, earthquake and landslide scenarios using an algorithm based on another opensource project called, InaSAFE as funded by the WorldBank, Australian Aid and the Global Facility for Disaster Reduction and Recovery (GFDRR). This is with a goal of quantifying affected populations and their needs for a period of time right after a disaster strikes.


Schadow1 Expeditions, OSM, GPS-Assisted Navigation/Trekking and Disasters in the Philippines


Schadow1 Expeditions has been mapping the country since 2005 although it has started its mapping contribution to OpenStreetMap back in 2008. The website, though it has only been established in 2012; aside from mapping, it also added up documentation to its expeditions and providing travel guides for the country.

By 2013, several months prior the Yolanda / Haiyan disaster, it has taken over the compilation of OpenStreetMap data to compatible Garmin GPS assisted navigation devices and improving further both of its included data and its cartography. The United Nations Office for the Coordination of Humanitarian Affairs has cited the map produced by Schadow1 Expeditions as one of the important sources of map exports that can be used by international agencies for relief and rescue operations right during the landfall of Haiyan in Guiuan, Eastern Samar. This has enabled agencies such as the International Red Cross and Red Crescent as well as the American Red Cross to be guided with street-level accurate maps during the disaster. Complete with damaged building and impassable roads as mapped by over 1600 mapping advocates worldwide during the Humanitarian OpenStreetMap activation. Maps have guided them even during the absence of local agencies at a time they were also devastated during the landfall. Thus giving them the capability to accurately plan and proceed with their on-air, on-land, and on-water operations in Tacloban, Palo, Ormoc and other localities in Leyte, Samar, Masbate and Panay Island.

The same data and map has also been used for Eastern Samar during the landfall of Typhoon Hagupit / Ruby in Dolores, Eastern Samar of 2014. While assessment through the hazard maps has been used during Typhoon Koppu / Lando of 2015 in Nueva Ecija. Disasters have been averted on these two instances after local governments have used the data for preparation before the typhoons have made landfall.

Currently, the GPS map of the Philippines provided by Schadow1 Expeditions is also being used by trekkers, drivers, bikers and explorers in the Philippines. See our #mapPHL page.

For a copy of the presentation provided by Schadow1 Expeditions in the Mozilla - Map the Philippines Talk for the 2015 GeoWeek, the data can be downloaded here.