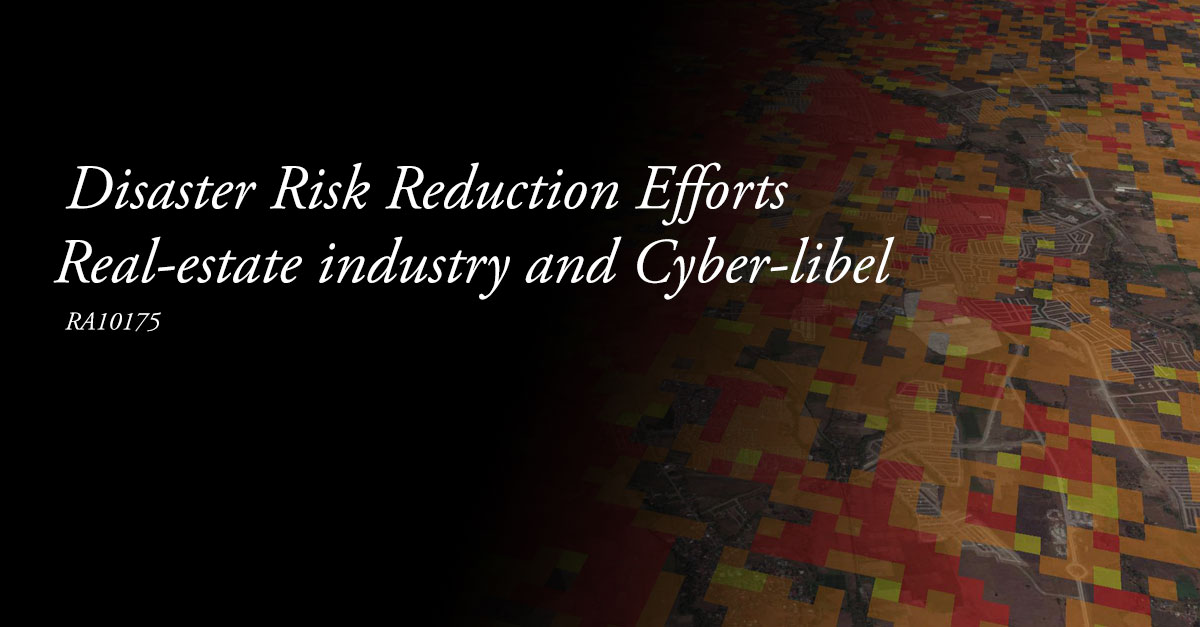 As the country is disaster-prone being situated within the Pacific Ring of Fire, at the edge of the Pacific plate, and frequently visited by typhoons during the rainy season, by 2012, the government has started to focus on its efforts for disaster risk reduction by investing on instruments, tools, and research; in the hope of completely mapping out the whole country for disaster preparedness. Also in the same year, the cybercrime law (RA10175) was enacted which penalizes the use of the internet for criminal purposes. Although the law is a leap for the Philippines, the Congress has added versions to it which tags libel as a criminal offense; which is deemed detrimental to freedom of expression to which the United Nations strongly opposes. Lately, this same law is being used by a certain real-estate company to protect its interest.


Disaster risk reduction can be attained through maps. And thus, Schadow1 Expeditions since 2012, is a travel and mapping resource for the Philippines, our mapping advocacy is being driven for the improvement of the country's tourism and its disaster mitigation; to which an accurate map has been regarded as its primary tool for presenting important data for the purposes of accurate navigation and hazards area detection prior to or during a disaster.

Through the Department of Science and Technology's Project-NOAH, the government has developed an application that integrated the real-time information from sensors, hazard maps, weather satellites, and lately through OpenStreetMap data, to present an understandable in layman's terms of the country's situation so that local government units can prepare for disasters even before a disaster strikes.

This approach of disaster risk reduction is called the "Zero Casualty Approach" where geospatial data is being used to avert human casualties by having the country be prepared with essential information for evacuation, humanitarian and relief operations even before a disaster strikes.

Because of the use of the Zero Casualty Approach, the government was able to avert massive human loss from disasters, A timeline below was presented by Dr. Mahar Lagmay of Project NOAH depicting the success of the use of geospatial, historical, and weather data even before the disaster strikes.


In 2015, the same Zero Casualty Approach is responsible for the aversion of casualties in Gabaldon, Nueva Ecija as caused by Typhoon Lando (intl. Koppu) It was a similar scenario from the 2012 disaster at Compostela Valley due to Typhoon Pablo (intl Bopha) except that disaster mitigation was not embraced by its local government thus resulting to more than 500 deaths.


It is true that no amount of science will work in disaster risk reduction if the people would not embrace it. Again, by Dr. Lagmay.

Until this time, not all local governments in the Philippines are compliant with this approach thus participatory mapping training for disaster risk reduction is being given similar to what we have done in Lubao, Pampanga (see Lubao Pampanga on Disaster Resiliency Map-up Training)

Unfortunately, in urban areas, where real-estate development is rampant, the laws for zoning are being constantly brushed and does not have enough teeth to curb housing developments to hazard areas. More often, disaster risk reduction studies are not being embraced and houses are still being built even in areas that are flood prone while construction standards for a disaster-prone country are not being strictly enforced. This enables scrupulous real-estate developers from building structures to flood-prone areas or near fault lines while the houses are not compliant with basic structural elements to withstand lateral forces due to flooding or earthquake.

The United Nations International Strategy for Disaster Reduction (UNISDR) has published building guidelines for houses in the Philippines so it can be disaster resilient. It includes advice on proper location and strict use of columns and beams. See the handbook here.

I myself who was in a hurry to purchase a house back in 2009 was even a victim when I was not yet informed of such structural standards and hazard maps.

As part of my nationwide advocacy for mapping, I have always been advocating the importance of maps in making people informed, not only about the beauty of the Philippines but also by being prepared when disaster strikes.

Unfortunately, this advocacy is being smothered by an attempt by the same real-estate developer where I purchased a house in Cavite; when as a private individual (a customer), posts and comments in social media based from a derived scientific data made to give warning on uninformed buyers regarding conditions that could have beset their project was regarded as "libel" by using the cyber-crime law.

Eventually, real-estate companies' sales who decided to build their projects on hazard areas are directly affected when the location is tagged as a hazard zone; on the other hand, the information benefits the people directly for they have the option to choose appropriate locations and create specific preparations for the safety of their family.

But as the government prioritizes disaster risk reduction by investing on hazard-identification and warning projects, the same cyber-crime law they enacted in 2012, specifically its section 4, c4 on cyber-libel is a backward approach by giving scrupulous real-estate companies a law to use to suppress the information. It is a "not-so-friendly way" to treat its customers.

In this case, how can the people embrace disaster risk reduction when in the first place, the information is being gagged using a libel law?


Disclosure: The writer of the article is currently facing a complaint by a real-estate developer with cyber-libel charges to which the writer himself is a customer and has purchased a house from the complainant. To which the libel charge has been based from posts derived from hazard maps authored by the University of the Philippines Volcano-Tectonics Laboratory and proper building guides from the United Nations. Similar various private individuals who were customers of this company are also facing libel charges when they have aired out issues in social media on how their complaints were handled by this real-estate company. For more information on the complaint filed against the writer, their complaint affidavit can be viewed here and while the writer's counter-affidavit can be viewed here.

February 19, 2016 update: The complaint filed against the writer in the Mandaluyong City Prosecutor Office has been dismissed as of December 22, 2015. More details on the article, Cyber-libel Case for Exposing Hazards Information.